From retracing the footsteps of the Franklin expedition in Canada’s Arctic to taking part in cocaine drug busts in the Caribbean, Lisa Tubb had her share of memorable moments during her first-ever deployment with the Royal Canadian Navy (RCN) in fall 2021.

It was a voyage of firsts for Tubb, who grew up in landlocked Mitchell, Ont., before studying history at the equally landlocked U of G beginning in 2012.

Last year, besides marking her firsttime crossing of the Arctic Circle en route to sailing through the Northwest Passage during the maiden voyage of the HMCS Harry DeWolf, she notched her inaugural circumnavigation of North America. This was the second RCN ship to sail around the continent.

“It was a once-in-a-lifetime deployment,” said Tubb. Now 27 and beginning her fourth year with the Navy as a public affairs officer, she is back in Ottawa on the issues management and operation desk.

But she hopes to get out on the water again soon. “I like to think the best is yet to come.” What she calls her inaugural “adventure” started in early August when she travelled to Iqualuit in Nunavut. There she met the vessel with its crew of about 80 people.

“We were introducing a new class of arctic and offshore patrol ship to Canada’s Northern regions,” said Tubb, whose job was to publicize the voyage with Canadians through social media, video and photos.

She had been on the ship for just over a week when she was charged with helping a CBC television crew headed by Peter Mansbridge to film a documentary of the Arctic. Tubb also led production of the Navy’s own documentary about the voyage called Into the North.

“We’re there to serve Canadians, to conduct presence patrols in the Arctic, and to fortify our close

“It was a oncein-a-lifetime deployment,” said Tubb, who hopes to return to the water soon.

Each of the new class of ships is affiliated with various Inuit communities. For HMCS Harry DeWolf, that was the Qikiqtani region of Nunavut.

One moment during the ship’s passage through the Arctic archipelago resonated with her U of G history studies.

She and others visited barren, wind-swept Beechey Island, where three members of the Franklin expedition were buried. Recalling the bleak surroundings and a hike over difficult terrain, she said, “You start to appreciate what those men went through. You can’t help feeling helpless for their situation, after struggling up that mountain, feeling the brittle rocks crack beneath your feet—their wintering place could not sustain them.”

After negotiating the Arctic, the ship continued down the western flank of North America to the Caribbean. There, the crew worked again with U.S. Coast Guard partners on Operation CARIBBE to counter illicit drug trafficking.

The team apprehended two small vessels transporting a total of more than 2,500 kilograms of contraband cocaine. Observing the activity from the deck of the patrol vessel, Tubb kept busy recording everything she could to tell the story later—and even donned gloves to help remove the narcotics from the boats.

“As the public affairs officer, I’m there on the bridge, taking notes, using my GoPro camera, hearing the voices of my friends crackling over the radio—and in the second event, seeing it unravel quite close by. I was up there with the guys the entire time 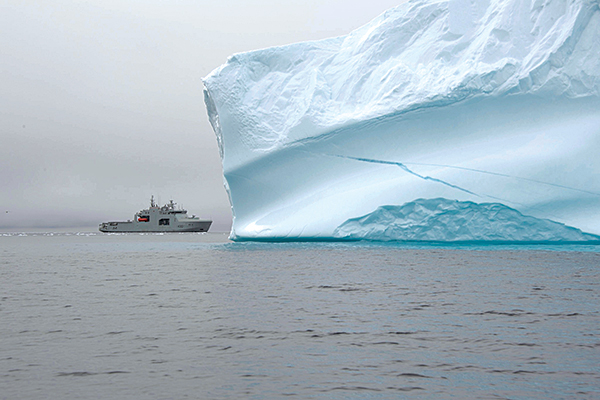 “My operations officer had to tell me to take care of myself, to go to bed. I didn’t want to miss a minute.”

Once through the Panama Canal, the ship headed up the Eastern Seaboard and docked in Halifax in early December.

“I joined the military because I wanted a challenge,” said Tubb, whose basic training as well as French language lessons and public affairs training occurred between 2018 and 2020 “The idea of service was already in the background.”

Her dad is the fire station chief back in Mitchell. Several relatives in her grandparents’ generation served during the Second World War; one great-uncle was in the Navy during the Korean War.

“Giving back to the community was something that really called me.”

Attending U of G sharpened her focus.“The whole idea to join the Forces started at Guelph,” said Tubb. One summer she worked with history professor Dr. Catharine Wilson on her Rural Diary Archive project, which
helped develop Tubb’s interest in personal accounts of history and led her to explore Canadian military stories especially.

Her U of G days also helped her learn about herself.

“I found out more about who I was as a person, my interests and values,” said Tubb. “Stories of the military and
heroes motivated me to push myself. I wanted to continue my study and storytelling of Canadian heroes.”

She ended up pursuing a personal project to investigate all the names inscribed on the cenotaph in her hometown, and she published a Historical Guelph article about her research on HMCS Guelph, a Second World War vessel.

On campus, she served as an orientation volunteer, worked for Hospitality Services and played on the University quidditch team that competed in nationals in Victoria. “Whenever I see Johnston Hall, Johnston Green and the Portico, I always picture it with quidditch in the background.”

After graduating in 2016, she completed a master’s degree at the University of Waterloo, studying the lives of workers at a wartime munitions factory in Ajax, Ont.

For last year’s deployment, she took along a Guelph Gryphons flag that found good use after one American naval officer flashed his own varsity colours. “I couldn’t let that go unanswered, I had to show the Gryphon off,” Tubb laughed.

“Our coxswain had said we could consider bringing something from home. The first thing I thought of was my U of G flag. It’s come with me to Victoria, to basic training—it’s my good luck charm.”

Lawyer turned 'Doctor'
The art of newspaper design
The Value of Play
Tackling concussions, head-on
At the helm