a roundup of the good and great you may have missed

In a year that may have felt like You Know What was all-consuming, it might have been easy to lose track of the uplifting, one-of-a-kind, memorable and even amazing pursuits and achievements of the University of Guelph community. Here’s a roundup of some of our favourite accomplishments from the past year showing that our students, faculty, staff and alumni continued to do good and great things in 2020-21, pandemic or no pandemic. 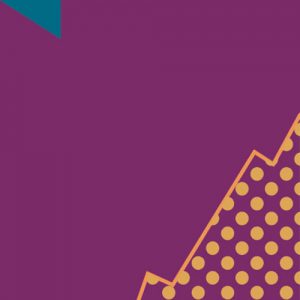 The University of Guelph earned a gold sustainability rating from the Association for the Advancement of Sustainability in Higher Education.

The independent global organization recognized U of G in 2020 for its sustainability efforts across academics, operations, community engagement, planning and administration, and innovation and leadership. 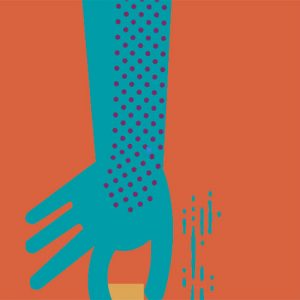 MealCare Guelph, a student-led U of G project, was named as a finalist for this year’s Future Ground Prize presented by the David Suzuki Foundation.

The volunteer group, founded by students Kiana Gibson and David Mahai, collects leftovers from campus food outlets and donates them to charitable organizations across the city. Some 16,000 pounds of campus-prepared food was diverted from landfills and donated to local charities in the last three years.

Says Gibson: “As anyone who has eaten on the U of G campus knows, the food that is served here is absolutely incredible, and it made no sense to me that all of the chefs’ effort went to waste, especially when it’s perfectly edible.” 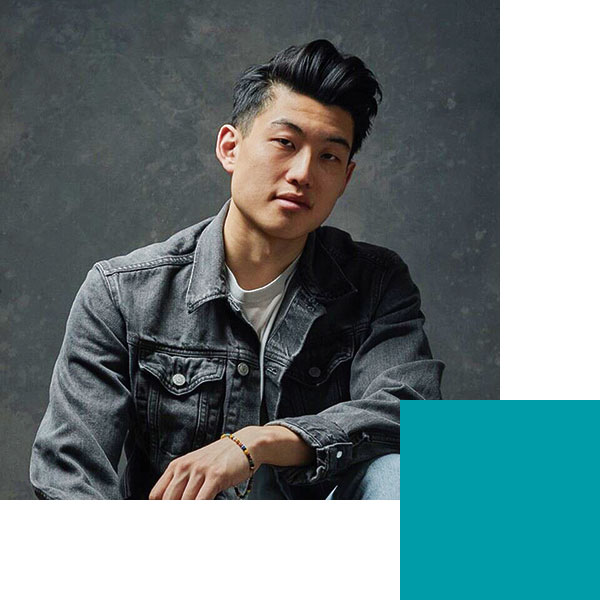 In 2020, University of Guelph psychology student Wing Tse became one of 16 Canadian students from among 700 applicants to receive the prestigious Terry Fox Humanitarian Award for his humanitarian work promoting mental well-being.

Tse’s monetary award will help with ongoing development of Smileage, the non-profit organization he co-founded to support young people facing mental health difficulties. Proceeds from its events and fundraising help to support programs at Toronto’s Stella’s Place, an organization that provides comprehensive mental health services to people aged 16 to 29 years.

As a boy, he says, he had no understanding of the mental illness that broke up his family. But it took a huge toll on his own mental health and nearly left Tse homeless.

“Ever since then, I have been really involved in the mental health community, not only to support myself because I was going through so much but just gaining knowledge on the subject in general.” 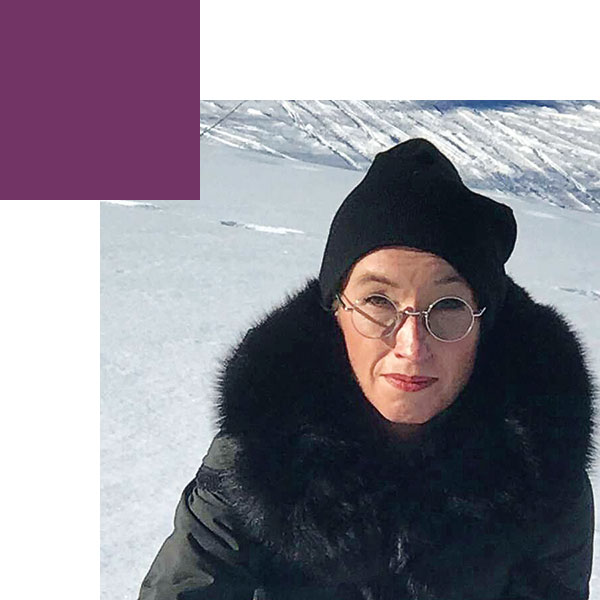 U of G student named Inuk woman of the year

Sharon Edmunds, a University of Guelph PhD candidate tracking an illness-causing parasite that threatens the health of Nunavut Inuit, was named a 2021 Inuk Woman of the Year by the Pauktuutit Inuit Women of Canada.
She was selected by the non-profit organization for her work to increase testing for the trichinella parasite in walrus meat, a traditional food of Nunavut Inuit.

“There are not many Inuit with PhDs,” said Edmunds. “I believe it’s so important to stay grounded in your culture, but I also think it’s important to ground yourself with western knowledge.” 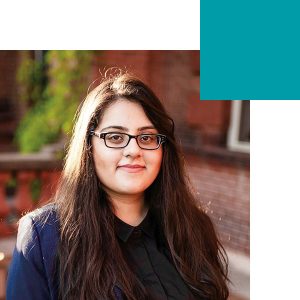 Fifth-year business student Nabeeha Pirzada led a student team that was among this year’s three winners of the Thinkathon Online Challenge: Our Digital Future C’est Ici. The world’s largest policy creation competition attracted more than 250 teams from Canada and Europe. 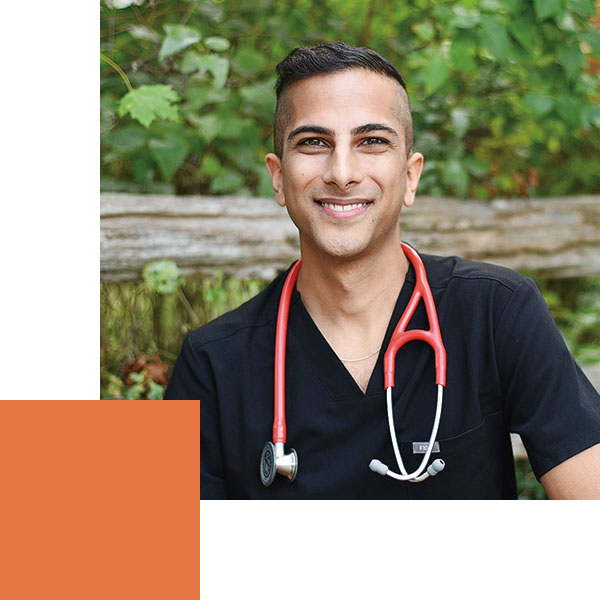 In 2016 and 2017, Dr. Ismail “Izzy” Hirji, B.Sc. ’10, DVM ’14, was the resident veterinarian and assistant manager of the Tacugama Chimpanzee Sanctuary in Sierra Leone.

Over the past 15 years, a mysterious illness has killed chimps at the 140-acre reserve, more than 50 in all. Affected animals show loss of coordination, gas bloating, vomiting, diarrhea and disorientation – and most die.

In early 2021, Hirji co-authored a research paper describing a new bacterial species linked to the disease. The team was led by researchers in Wisconsin who found the suspect microbe in tissue samples from sick chimps.

Those samples arrived in 2016, thanks to the U of G grad’s extraordinary efforts to ship material that had been stored in freezers in Sierra Leone. After a planned police escort to the airport failed to show up, Hirji resorted to a private car and then – after the ferry turned out to be closed – a private boat to get the material to the airport.

Across the ocean, the shipment was transferred from New York to Wisconsin, where his collaborator was waiting to unpack it. “He got them to the lab, and they were still frozen. The samples made it,” says Hirji, whose role was described in a New York Times article this year. 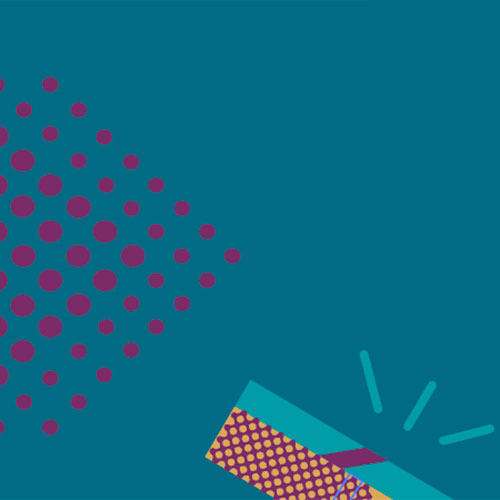 Helping to eradicate malaria while preserving local ecosystems in Ghana is the long-term goal of Target Malaria, an international research project involving University of Guelph scientists.

The researchers will use DNA barcoding technology developed here to identify insect species from the West African country and help construct food webs connecting insects and their diverse predators.

By understanding what eats what, the Target Malaria team aims to genetically control disease-carrying mosquitoes while maintaining normal prey-predator relations. 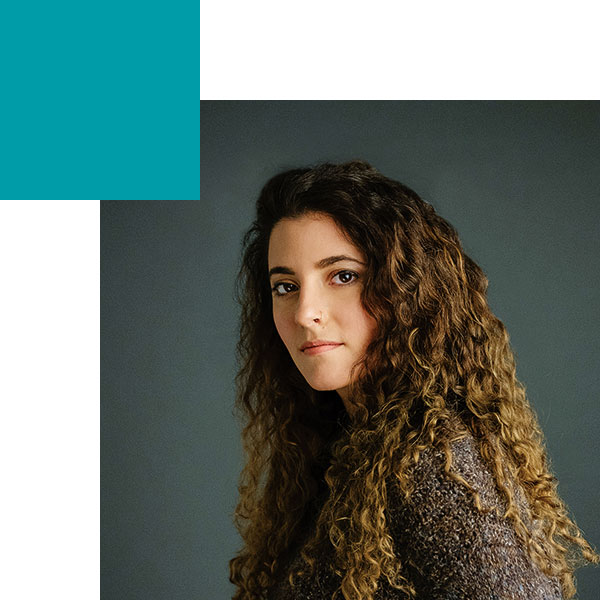 Documenting human rights for Down syndrome

This year, U of G graduate and award-winning photojournalist Vanessa Tignanelli was selected for a volunteer assignment with Photographers Without Borders (PWB). She will spend about 10 days in November focusing her camera lens on families of children with Down syndrome in the Central Asian nation of Kyrgyzstan.

There, says Tignanelli, “society is not kind to people with Down syndrome.” Many parents hide their children at home or put them up for adoption or place them into institutions, often on a doctor’s advice.

PWB’s partner organization in Kyrgyzstan, the Sunterra Foundation, plans to use her work to raise awareness of numerous challenges, including ingrained stigma and lack of resources and supports for kids with Down syndrome and their families. 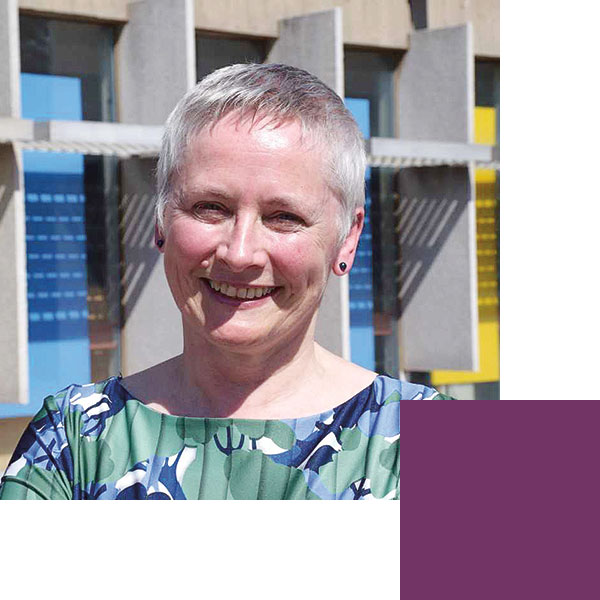 Dr. Christine Bold, a professor in the University of Guelph’s School of English and Theatre Studies, was named a Fulbright scholar for the 2020-21 academic year. A self-described settler scholar, she was hosted by the National Museum of the American Indian in Washington, D.C., where she studied Indigenous performers who travelled the world at the turn of the 20th century. 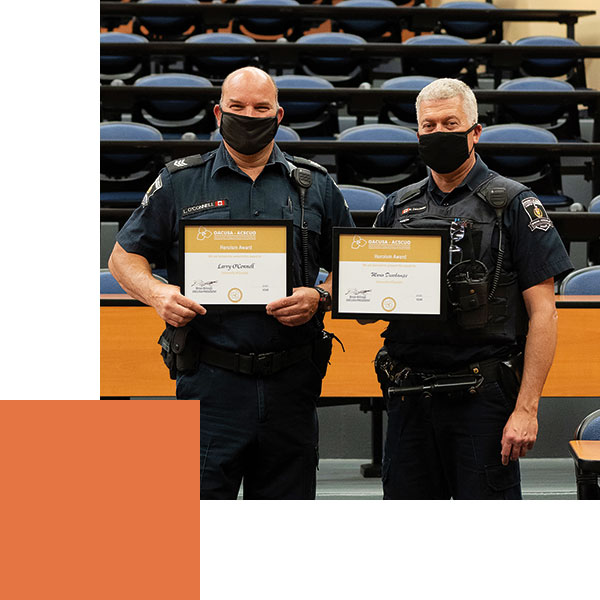 Saving a life in sub-zero temperatures this past winter has earned a Heroism Award for two U of G campus community safety officers.

On Feb. 15, sergeant Larry O’Connell (left) and special constable Mario Deschamps (right) spotted a 78-year-old man lying in deep snow near Cutten Fields after a fall. Doctors later said that without the officers’ intervention, the man would have died.

The pair received their award from the Ontario Association of College and University Security Administrators. 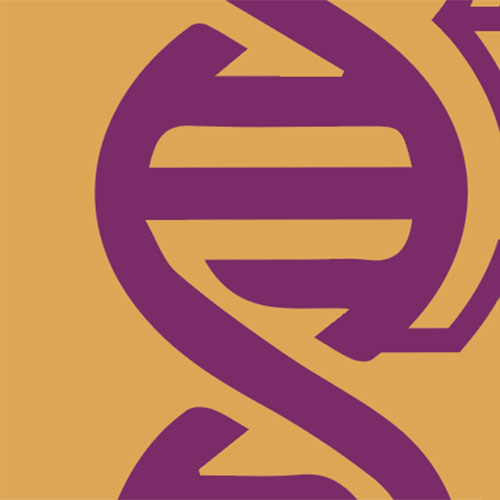 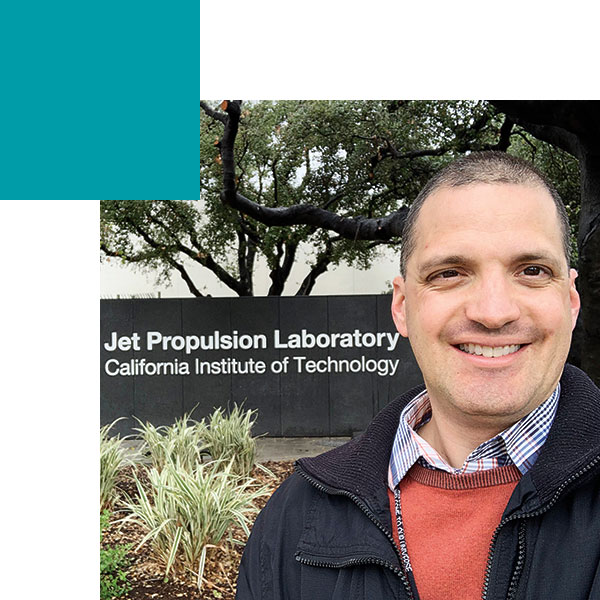 As a scientist with NASA’s Jet Propulsion Laboratory (JPL) in Pasadena, California, Dr. Chris Heirwegh, a 2014 physics grad, had spent nearly five years helping to prepare a high-tech instrument carried aboard the latest Mars rover. Perseverance touched down in the red planet’s Jezero crater on Feb. 18.

PIXL (Planetary Instrument for X-ray Lithochemistry) is designed to help look for signs of ancient life on Mars. Along with a second device that looks for organic molecules, PIXL will give scientists a “bio-signature” of any fossilized microbial remains in the rock.

Heirwegh and his JPL colleagues will analyze data and maintain the instrument from 300 million miles away during the rover’s planned three-year mission. 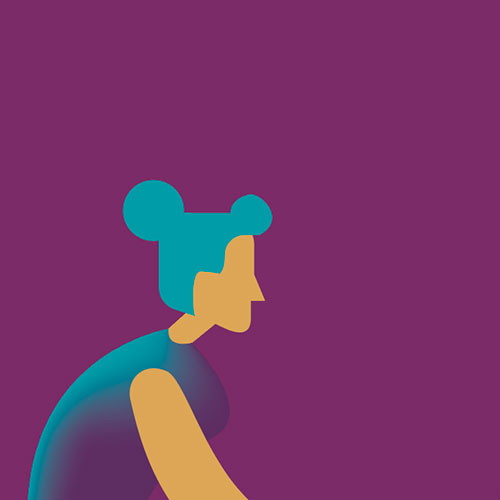 “In the Know,” a new provincial mental health program for farmers created by experts in the Ontario Veterinary College at the University of Guelph, was launched early this year. The program aims to help farmers better identify, understand and cope with the many mental health challenges they face in their profession.

Run by the Canadian Mental Health Association (Ontario), the program was developed by Dr. Andria Jones-Bitton and post-doctoral researcher Dr. Briana Hagen, both in the Department of Population Medicine. 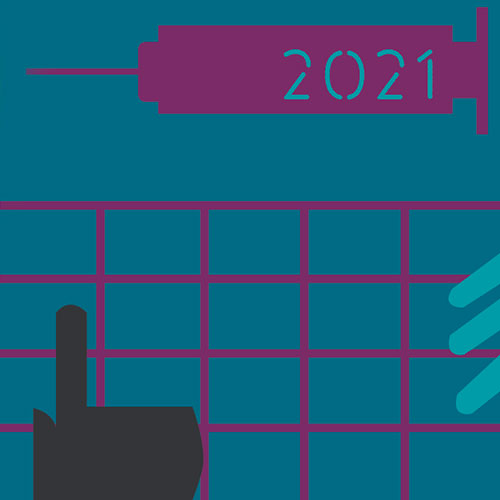 3M national teaching award for U of G educator

Dr. John Dawson, a professor in the Department of Molecular and Cellular Biology, is one of 10 educators across Canada to receive this year’s 3M National Teaching Fellowship Award.

Dawson is a leader in education research and is the inaugural faculty director of the College of Biological Science Office of Educational Scholarship and Practice, the only office in Canada focused on facilitating best teaching practices in biology. 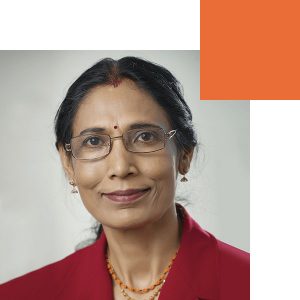 Prof named one of Canada’s most powerful women

Dr. Manju Misra, School of Engineering, was named as one of the Women’s Executive Network’s Most Powerful Women for 2020. Misra is a lead scientist at U of G’s Bioproducts Discovery and Development Centre, which develops “greener” alternatives to petroleum-based products ranging from light-weight car parts to the world’s first fully compostable coffee pods. 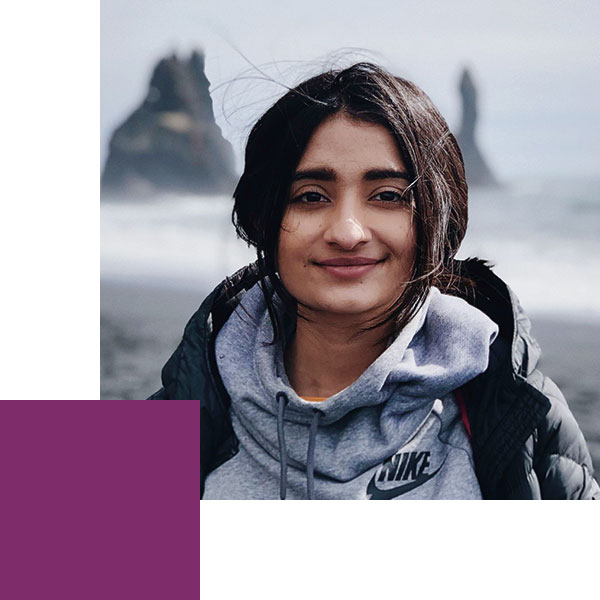 Climate-conscious grad aims to shake up the establishment

U of G alum Manvi Bhalla was named among Starfish Canada’s top 25 environmentalists under 25 in 2020.
A 2019 biomedical sciences grad, Bhalla heads Shake Up the Establishment (SUTE), an advocacy organization she co-founded in her graduation year. The group, which includes U of G grads and current students, aims to encourage young voters to speak up and act on climate justice.

In November 2020, Corporate Knights named SUTE executive members, including Bhalla, among its top 30 under 30 sustainability leaders. 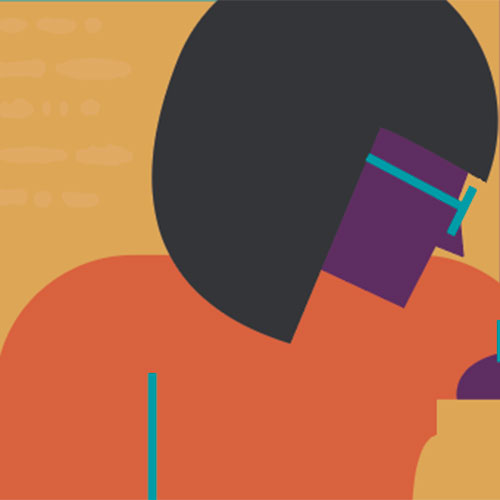 Homeless youth are often forgotten, but U of G student Kartikay Pabbi is dedicated to bringing them hope.
A founding member and part of the executive team of the Toronto chapter of Hygiene for the Homeless, Pabbi helped deliver 300 hygiene kits containing toothpaste, toothbrushes, deodorant, feminine hygiene products and other items to youth shelters in the Greater Toronto Area in late 2020.

“To be able to do this amidst a global pandemic and impact hundreds of lives, we were truly taken aback and humbled,” he says. 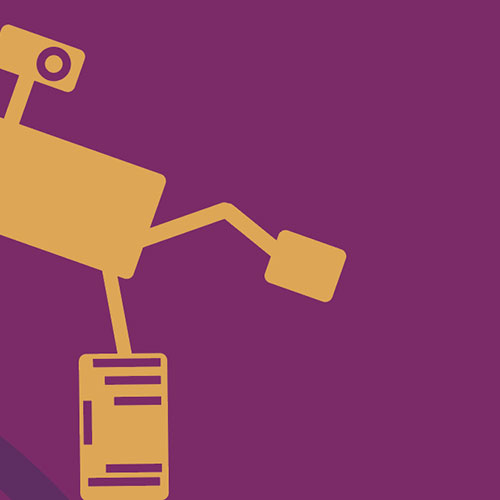 Haley Davis hoped to raise $10,000 this spring for Brain Cancer Awareness Week, but the bio-resource management student ended up raising more than $25,000 for the Terry Fox Foundation and the Brain Tumour Foundation of Canada.

The Gryphon track and cross-country distance runner covered 150 km running from Guelph to Goderich in daily stints over a week in early May.

Diagnosed in 2019 with a rare brain tumour, she has undergone surgery and radiation, including this past April.
“It’s incredible how much support the campaign has received,” says Davis. “I keep seeing more people wanting to contribute. It blows my mind.”

Trivia Buff Grad Is Jeopardy! Champ for a Day
Cannabis Campus
U of G Grads Nab Spots in Top 10 at Beijing Olympics
Tim Lambert: Champion of the Humble Egg
From Arctic to Caribbean, First-ever Navy Voyage Offers 'Adventure' for Grad