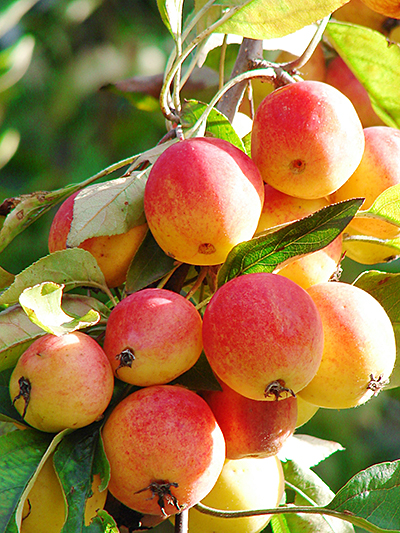 Ontario’s wild, or feral, apple trees have a genetic connection to apple varieties grown more than a century ago in the province, says U of G research that compared the genetics of hundreds of feral trees to that of non-feral varieties.

“A relatively small number of varieties that were grown in Ontario more than 100 years ago, some of which are no longer grown commercially, are showing up as likely parents of these feral apples,” says Brian Husband, an integrative biology professor who worked on the study with graduate student and primary author Dane Cronin and research associate Paul Kron.

The finding has implications for the hard apple cider industry, which has recently become enamoured of wild apples and their uniquely rich taste. The researchers say good, strong taste may be influenced by ancestral characteristics.

Published in the journal Molecular Ecology, the study involved hours of trekking through fields and forests across Ontario in search of feral trees for DNA samples. The researchers used DNA genotyping to evaluate an array of apple genes acquired from apple DNA banks in Canada, the U.S., and Europe. Apples were first grown commercially in Ontario in the late 1700s.

Using the samples, the researchers examined the genetic similarities between known varieties and feral trees, particularly those near traditional apple-growing regions.

Cronin says the findings suggest, among other things, that heritage cultivars – trees produced many years ago through selective breeding – are still contributing to the gene pool.

He says the characteristics of feral populations may resemble those of apple varieties grown hundreds of years ago by Ontario cider makers.

Fear May Drive Species to Extinction
Bee flower choices are altered by exposure to pesticides
Pandemic taking toll on women, girls with disabilities
Lying to get the job
Heart attack symptoms, treatment different for women