Those who have worked most closely with University of Guelph president Franco Vaccarino call him a visionary, a leader dedicated to inclusiveness and equity and to improving life for people everywhere.

At a transitional time for the University, when the institution needed to find a clearer identity and new heights, Vaccarino was the ideal leader for strengthening U of G, say University and community leaders.

“He always talks about the dust-bathing jungle fowl,” says provost and vice-president (academic) Charlotte Yates with a tone of amusement in her voice.

“He would describe how these birds get agitated and flap their wings, and a cloud of dust would rise up around them.”

The story was a metaphor for how people can react with “much external and internal kicking up of dust” in response to stressful situations, Yates says. But once the dust settles, the path forward becomes clear. Vaccarino, she says, is a thoughtful and thoroughly engaged leader who is rarely ruffled. 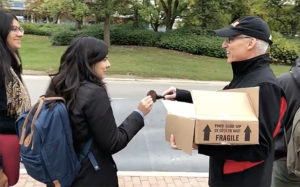 An internationally recognized neuroscientist, Vaccarino was appointed in 2014 as the University’s eighth president. He will step down this coming August, after deciding that the time was right for personal and institutional transition.

Susan Frasson, president of Wood Development Group in Guelph and a major U of G donor, has been known to write “best president EVER” on Vaccarino’s Instagram posts.

“He is anything but average and yet would never let you believe he is anything but. He is everything one would want in a president at the University of Guelph,” Frasson says.

“Franco is a quiet, inspirational leader with great vision and a gentle personality, one who leads by example. He is down to earth and very approachable. People want to follow him.”

Frasson adds that Vaccarino lives U of G’s “Improve Life” motto. “He has been such an incredible president because his values aligned with the values of the University,” she says.

Although she wishes Vaccarino had stayed on as president, she says she respects his decision. 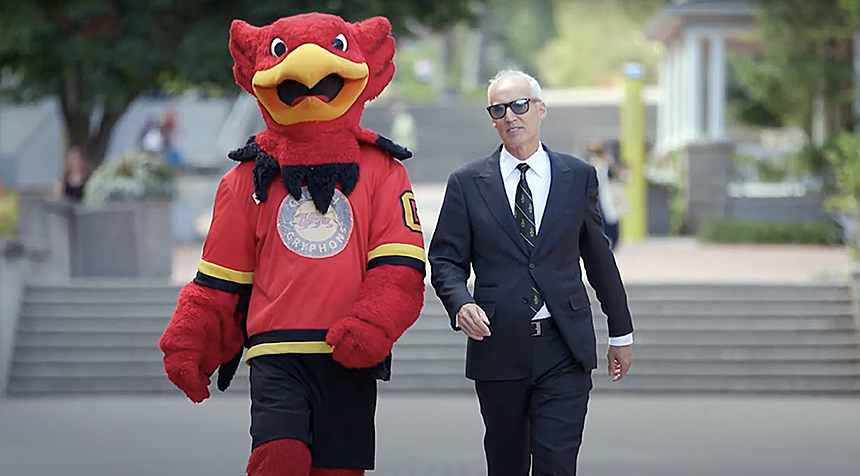 “Why? Because I know that Franco will use his talents to make the world a better place, and improve life.”

A highly knowledgeable and respected neuroscientist, Vaccarino has the special talent and ability to help the world fight addiction and improve mental health, Frasson says. “He will undoubtedly contribute enormously to that effort.”

Many say Vaccarino displayed great poise, strength and transparency during recent challenges in the University community — challenges that reverberated widely.

When U of G PhD candidates Ghanimat Azhdari and Milad Ghasemi Ariani were killed in a plane crash in Iran early this year, Vaccarino openly expressed his deep sorrow over the tragic loss, voicing the collective grief of the University community and galvanizing an outpouring of support for the friends and family of the students.

Guelph Mayor Cam Guthrie says what he most appreciates about Vaccarino is his well-rounded character and inclusive approach to leadership.

“He thinks in ways that encompass all the positive aspects of what he is trying to do, while having a strong focus on how it is going to impact others,” says Guthrie, adding Vaccarino also empowered others to influence and shape the University’s future.

Guthrie says he appreciated Vaccarino’s emphasis on building the relationship between the University and the community of Guelph.

Guthrie adds that during his term, Vaccarino demonstrated how much the University can give back to the community and have an impact on the world.

He is credited with strengthening U of G’s status as one of Canada’s top comprehensive universities. He has championed the unique talents of its colleges and schools while honouring the University’s internationally recognized strengths in veterinary medicine and agriculture. 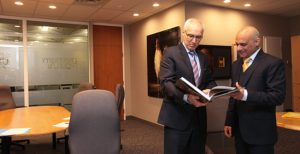 For five consecutive years under Vaccarino’s leadership, U of G grew in status and achievement, ranking second among Canadian comprehensive universities in the national Research Infosource Inc. survey. The Ontario Veterinary College (OVC) was tops among Canadian veterinary schools and rose to fifth globally in the World University Rankings.

He worked to elevate the University’s core values of diversity, equity and inclusion, fostering a shared understanding that the most innovative, creative and successful universities are those that acknowledge and welcome its diversity.

Vaccarino stressed U of G’s commitment to internationalism and global citizenship, seeing the institution’s expertise in food, health, environment and communities as to solving global problems and making a profound difference in the world.

He sought ways to build U of G’s reputation for interdisciplinary approaches to research and teaching and strove to unite diverse researchers under the common purpose of improving lives.

His strengths as a communicator and visionary, many say, articulated a clear and positive direction for U of G’s future and helped attract large donations and research grants. He promoted the institution’s identity as Canada’s Food University and launched the massive Food from Thought project, funded by a $76.6-million grant from the Canada First Research Excellence Fund, in addition to renewing the 10-year, up to $71 million partnership between U of G and the Ontario Ministry of Agriculture, Food and Rural Affairs. 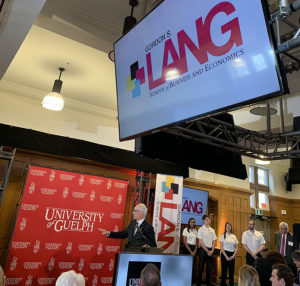 Vaccarino’s strong relationships with donors are credited for several historic contributions to the University. A $20-million private donation from the Arrell Family Foundation established the Arrell Food Institute, intended to focus on food in order to improve life. A $21-million donation from Stu and Kim Lang established the Gordon S. Lang School of Business and Economics, geared to developing future business leaders for a more sustainable world.

“If a university is lucky, it gets the leader it needs at a given point in its institutional history,” says OVC dean Jeffrey Wichtel.

“The University was fortunate in 2014 when Franco was recruited as president. He was the leader we needed.”

The University had evolved over previous decades from a small, rural-oriented university to a mid-sized, research-intensive institution and among the best comprehensives in the world, Witchtel says. In 2014, after an intense and dizzying period of change involving expansion of facilities and programs, U of G needed to clarify its identity.

“Franco arrived and did what smart, humble leaders need to do: he listened and observed,” Wichtel says. “He adroitly noted the institutional vertigo and set about a process to seek consensus on the University’s ‘North Star’ — its mission and core values.”

Rene Van Acker, dean of the Ontario Agricultural College, calls Vaccarino a consistently positive person throughout his presidency. His positivity and strong vision inspired the U of G community to work together to achieve new levels of success.

Franco is a quiet, inspirational leader with great vision and a gentle personality, one who leads by example

“He has shown us what we are capable of and made us wonder what else we can achieve,” says Van Acker. “It is a great legacy for the University of Guelph.”

It was apparent from the start that Vaccarino’s vision was already sharply focused, Van Acker adds.

“In our first conversation, he conveyed to us his view of the value and strength of the University as Canada’s leading comprehensive university renowned in food, agriculture and veterinary medicine. His clarity of the reality and vision of the leading position our University held was remarkable, reassuring and inspiring.”

Vaccarino’s skills as a communicator and listener are among the characteristics that made him a gifted leader, U of G leaders say. This helped him communicate his vision for the University, says Yates. “He has a special ability to engage with all members of the community on a personal level, including students, faculty and staff, donors, government and business partners. 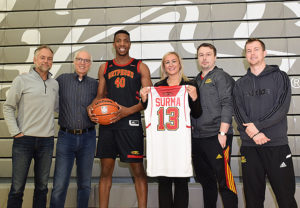 “Those communication skills have benefited the University enormously.”

Others note his capacity as a listener, whether engaged one-on-one, with government leaders and donors, during Board of Governors meetings or in gatherings with students.

The strategic renewal process that Vaccarino set in motion early in his tenure was rooted in his strong beliefs in the principle of knowledge in action. Universities foster ideas and innovation and inspire hope, he says, but they are also a place where fast-changing knowledge and learning can be applied to improve life.

Formerly principal of University of Toronto Scarborough (UTSC) and vice-president of the University of Toronto, Vaccarino guided the major expansion of the UTSC campus and faculty, and introduced new areas of scholarship and learning. He brought that extensive experience as a builder and visionary to U of G.

“Franco’s passion for the University of Guelph was very clear,” says Shauneen Bruder, chair of the U of G Board of Governors. “He loved the role and how it brought him close to all members of the University community. His relationships with the Board were characterized by transparency and thoughtful, wise and bold advice and counsel.”

Bruder says the strategic framework championed by Vaccarino continues to have a powerful influence on the University.

“The process of engagement was powerful in reinforcing a culture of openness, integration and shared accountability,” she says, adding that Vaccarino’s efforts resulted in innovative new initiatives and investments while strengthening partnerships.

Vaccarino, she adds, engaged with students, faculty and staff as well as other members of the University community and affiliates including alumni, donors, government and business partners.

Following an administrative leave beginning in fall 2020, Vaccarino will return to his neuroscience research and scholastic interests, including continuing to serve as a faculty member in U of G’s Department of Psychology. 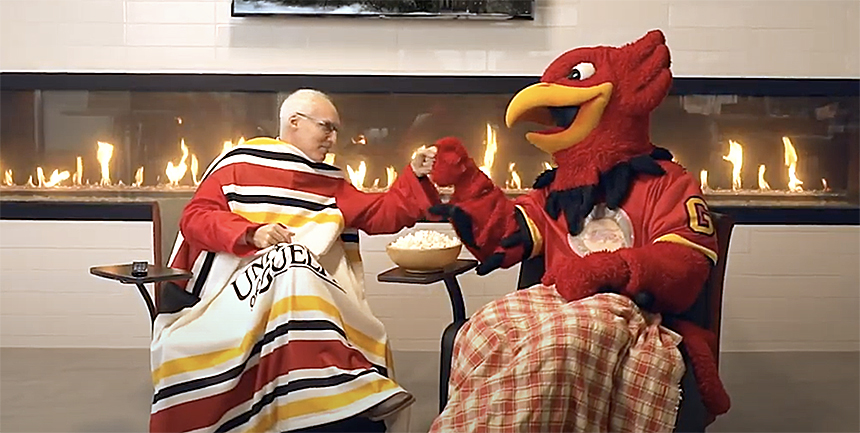 Trivia Buff Grad Is Jeopardy! Champ for a Day
U of G Has a "Supervillian" Grad
Alina’s superpowers
Sustainable Solutions
U of G Grad Heads Project to Improve Workplaces for Women in Skilled Trades