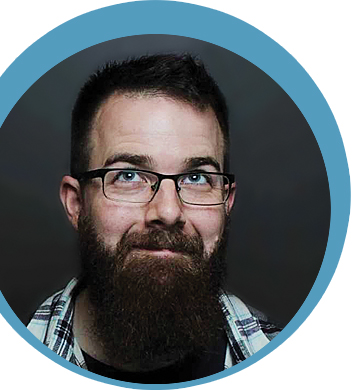 Nick Montgomery’s IMDb profile is packed with credits – for visual and digital effects, graphics, television and film editing, and cinematography. A lot of what he knows, he taught himself, he says, but his U of G education gave him the tools to ask the right questions.

Montgomery is a freelancer in the television and film world. He owns Toronto-based Merc Media. After moving to Guelph from London, Ont., to attend university, he soon became a fixture in the local filmmaking community. He graduated in 2006 with a BA in psychology. “I stuck around because I loved the city and it had a growing underground of indie filmmakers at the time, which I fell into,” he says. “It was easy to learn through trial by fire on fun film sets with other DIY guerrilla filmmakers.”

A kind of defeatist attitude was prevalent in mainstream film culture when he was struggling to decide what he wanted to become.

“I was fascinated with film from an early age, always seeking out behind-the-scenes videos and books on my favourite films so I could dissect how they were made,” says Montgomery. “But I was always told that breaking into film involved going to an expensive film school for years, working my way slowly up a long ladder that started with getting coffee for directors, and that it was near impossible to be successful at.”

Hanging out in Guelph’s indie film community showed him that a film career was achievable through hard, fun work.

“I started out by assisting on low or no-budget film sets and 24-hour film challenges, hanging out at Ed Video to take courses and networking with others. I funded my own short horror movie so I could try my hand at directing, shooting and editing. Editing was the thing I liked the most.”

His first feature film editing gig was for the horror flick 2014 The Drownsman. He had a knack for editing scary scenes. The more he worked, the more he learned. U of G taught Montgomery how to seek out information using the resources and people at hand, how to ask the right people the right questions, and where to get the best advice and guidance when he needed it. Those lessons served him well when he took the leap into film and television.

“It’s an industry where you have to be very active in your growth and progress, which is what my time at U of G helped to develop.”