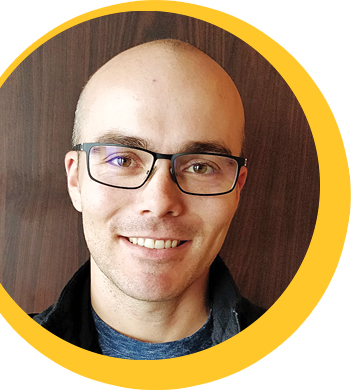 With Sony Pictures Imageworks since 2017, Terry Dankowych is a busy animator. He has made vital contributions to the popular animated features Smallfoot and Angry Birds Movie 2 and is currently part of the animation crew on another feature.

Growing up in Newmarket, Ont., he aspired to be a professional athlete and excelled at football. Then he took the thrill factor up a few notches and got into motocross racing, something he was also good at.

But no matter what he threw himself into, Dankowych said, drawing was the one constant. Like other U of G grads who went on to become animators, he always had a thing for putting pencil to paper.

“Drawing and trying to tell stories through those drawings was something that started pretty early for me,” says Dankowych, who graduated with a BA in 2008. “There is a briefcase stuffed full of those ‘storybooks’ at my parents’ house.”

The childhood drawings were accompanied by text. Before he could read or write, he dictated the story to his mother. When paper was in short supply, he would make a drawing on his last remaining sheet of paper, erase it and draw the next one in a sequence. In this way, he may have inadvertently planted the seed of animation in his young mind.

His father was a computer programmer, so there was always access to computers at home. At a young age, Dankowych started using one as a drawing tool to make crude animations using simple paint programs.

At U of G, he had access to even more powerful computing tools. His animated experiments on them helped him gain the confidence and proficiency needed to get into a visual effects school. “The University helped me see that a career in animation was possible.”