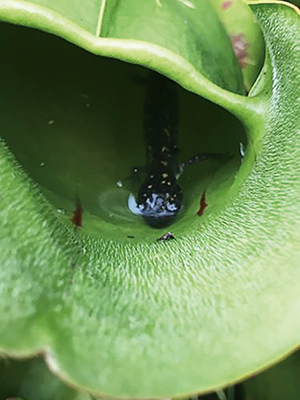 Call it the “Little Bog of Horrors.” In what is believed to be a first for North America, biologists at U of G have discovered meat-eating pitcher plants in Ontario’s Algonquin Park wetlands.

The plants consume not just bugs but also young salamanders. Prof. Alex Smith, Department of Integrative Biology, calls the finding an “unexpected and fascinating case of plants eating vertebrates in our backyard.”

Pitcher plants growing in wetlands across Canada have long been known to eat insects and spiders that fall into their bell-shaped leaves and decompose in rainwater collected there. But until now, no one had reported this salamander species caught by a pitcher plant in North America.

The U of G team found almost one in five plants in a bog pond in Algonquin Park contained the juvenile amphibians, each about as long as a human finger. Several plants contained more than one captured salamander. The findings were published in the journal Ecology.

Pitcher plants may have become carnivorous to gain nutrients, especially nitrogen, that are lacking in nutrient-poor bog soil, Smith says.

Tongue-in-cheek, he adds that the find may also prompt park officials to rewrite interpretive materials. “I hope and imagine that one day the bog’s interpretive pamphlet for the general public will say, ‘Stay on the boardwalk and watch your children. Here be plants that eat vertebrates.’”