David Hoselton’s law degree didn’t make him a lawyer. But it definitely made him a better writer.

“If you’re asking me why I took four and a half years of my life and flushed it down the toilet, it was because I thought all lawyers were literally like Perry Mason,” says the 1997 bachelor of arts U of G alumnus, speaking of the lead character of a popular courtroom drama he watched when he was a kid.

A successful Hollywood writer, Hoselton was interviewed on speaker phone as he drove to Santa Monica from his home in Los Angeles to begin his writing workday.

He is part of a 12-member writing team currently working on Season 3 of ABC’s The Good Doctor. Each writer is assigned an episode. He’s crafting episode 5.

Hoselton got his big break in Hollywood when the screenplay he wrote with his law school buddy Lorne Cameron called Like Father, Like Son became a 1987 hit movie. He has been writing for movies and television ever since – more than 30 years.

“Being raised on TV, I actually thought a lawyer just appeared in court and there’d be a criminal on the stand and you’d force them to confess and save the day, like Perry Mason,” he says. “So, I thought it would be really cool to be a defence lawyer or criminal prosecutor. By the end of the first year of law school at the University of Toronto, I thought, ‘This is probably not going to land for me.’” 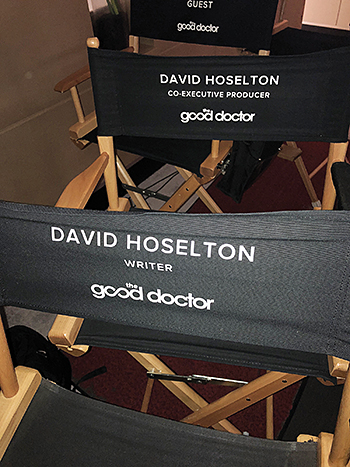 No quitter, Hoselton finished his law degree so he would have something to fall back on in case other pursuits fell through. Degree in hand, he leapt into screenwriting. As his Hollywood career took off, he began to see how his legal training applied to writing.

“Law is rooted in the analysis of facts and the presentation of two opposing viewpoints and how to support those two viewpoints,” he explained, as he cruised along the Pacific Coast section of his commute, remarking on the early morning surfers. “And that is really the basis of writing dialogue or dramatic conflict.”

He also made invaluable personal and professional connections both at U of G and in law school, including perhaps the most important one of his life. He met his wife, Brenda Skelly, at U of G in a criminology class. They have been married for nearly 36 years. “I told her I loved her on the U of G campus.”

Without really knowing why, Hoselton gravitated into poetry and creative writing courses at U of G, only understanding later their deep impact.

“The creative freedom I found at U of G was the freedom that took me all the way down to California.”

He met Cameron and his current boss, Dave Shore, in law school. “That ended up being my way into the movie and television industry.”

“The creative freedom I found at U of G was the freedom that took me all the way down to California.”

“My educational experience was basically all on College Avenue in Guelph,” he says. “I went to College Avenue Public School, then to Centennial CVI for high school, and then I took quite the big leap by going all the way up College Avenue past Edinburgh Road to the University of Guelph.”

writer was his voracious appetite for TV-watching. He even spent his own money to buy copies of TV Guide when he was young.

For his work on The Good Doctor, Hoselton commutes each morning to a Santa Monica office, where writers work together in close quarters. It’s not unlike a typical office environment, but the work itself is very atypical.

“Writing is a lot of work, but the upside is it’s really creative,” he says. “You get to tell not only great stories, but you get to work with really great people. The writers are all smart, funny, enlightened people and you’re surrounded by them all the time.”

Hoselton has written for, produced or created stories for TV series including Bull, Houdini and Doyle, Chicago P.D. and House. He’s blunt about what it takes to survive in the business.

“The thing you come to understand about Hollywood is it’s based on money and very predictable that way. If they can make money off you, they want to be with you, and if they can’t, they don’t.”

Writing for a network show or a hit movie is about the best-paying writing gig you can get, he says. But the sense of creative fulfillment that comes from the work may be the most satisfying aspect of it.

“Every time I get on a new project, there is always that creative challenge of having to do something new and creative,” he says. “Writing something that challenges you and takes all your talents is what writing is all about.”