Ever-present doodles in her notebook margins clued University of Guelph grad Tory Miles into what she really needed to do with her life.

“I would say I was a late bloomer,” says Miles, who majored in literature at the University. “I wasn’t really sure about anything, especially about what I wanted to do as I went through university. I would put it down as an exploratory phase for me.

“If you looked at my notebooks, the one consistency is the doodles on everything. Finally, I realized that I loved art and I started taking studio art classes. In combination with English literature, it was a great education.”

During her time at U of G, she read great works of literature and learned about the power of storytelling – about the many ways there are to tell a story and the infinite array of details that go into crafting a good one.

But it was the doodling that sent a clear message.

“Eventually it just dawned on me: I wanted to be an artist of some kind.”

Her artist mother, Leslie, focuses on landscape painting; her father, John, retired as U of G assistant vice-president (finance and services).

Miles was a cartoonist for the U of G student newspaper. She also learned pagination software at the Ontarion and helped with publication layout. Perhaps most important, she found at the paper a work environment that clicked.

“It was such an incredible energy in there. And whatever that energy was, it’s what I wanted to be a part of.” 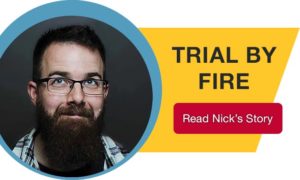 After U of G, she studied video game design at Humber College. Those skills were transferable to film.

Miles now works for Mr. X Visual Effects in Toronto. She was involved in the Oscar-winning Guillermo del Toro film The Shape of Water, using her visual art skills to help transform Toronto into Baltimore while adding digital effects to the film’s extraordinary underwater scenes.

Her work in special effects is the contemporary version of matte painting. Instead of painting on glass, she uses the digital tools in a computer program to enhance and alter cinematic environments.

Matte painting has been part of filmmaking for more than a century. Before digital tools were available, landscapes, buildings or people not present at the filming location were hand-painted on glass. The highly detailed image was then blended precisely with live-action footage to create the illusion of a coherent environment.

“They used to call us matte painters, but now we’re becoming environment artists,” Miles says. “We combine an array of digital techniques using very advanced computer programs. You paint with a brush in tandem with that, but it’s a digital brush. Having a background in and understanding of the importance of visual details comes into play at all levels, even if you’re using a computer.”

Almost anyone with a visual art talent can learn to make art with the computer, she adds. It just takes time, effort and a lot of curiosity and enthusiasm.

The Shape of Water was set in Baltimore but shot in downtown Toronto. Miles conducted extensive research on Baltimore, becoming expert in the intricate visual details of the city.

“There were some parts of downtown Toronto that didn’t look U.S. or Baltimore enough,” she says. “So I had to go in and replace things that didn’t belong, using tons of sourced images of Baltimore.”

Digital effects were used to create the movie’s underwater scenes, for which Miles did the concept art.

“There were things like tiny particulate bubbles, how the light shines through it and refracts differently. With things like that, you are kind of doing still images. It’s like painting.”

Film production workplaces, she adds, have a newsroom vibe.

“It’s really stressful, you have crazy deadlines, you’re in this tight team and you really have to work together. As much as I like academia, I really got inspired by that vibe, and that’s the environment I ended up in.”

The animation/special effects work environment is a pressure cooker, she says. Competition between companies is stiff, and the technology is always changing.

“It is a constant challenge to find ways to make the shot the fastest, easiest, best-looking way possible. It’s not an easy industry in that way.”

Directors, she adds, change their minds frequently, and digital artists must keep up, change directions and get the job done. Being able to handle intense pressure is an integral part of the job.

“To young people wanting to get into the industry, I say take every opportunity you can to explore graphics and computers. Try pushing into that world however you can. Universities have really great minds. They have the language and can teach you how to research. But if you can apply all of that to newer mediums and technologies and learn as much as you can, you’ll do much better.”

The worlds of mathematics and visual art have always intersected in Kristine Middlemiss’s life. So it’s not surprising that she landed in a career where visual images are created with complex mathematical calculations and advanced technology.

“Growing up, I was always into art and drawing, crafts and just building stuff,” says Middlemiss in a telephone conversation from Los Angeles, California, where she works for animation giant DreamWorks.

She may not have known at a young age about the nascent fields of augmented reality, virtual reality or motion capture, but she knew she loved art and pop culture. Growing up in Newmarket, Ont., Middlemiss attended an arts-oriented elementary school focused on visual art, drama and music.

“But my mom was a math teacher. So both of those worlds came together in my life.”

When the idea of becoming an animator first began to sink in, her dream was to use traditional methods of putting hand-drawn images together with stop-motion filming.

“But in high school, there were computer programming courses and I just started taking as many as I could. I got to do a lot of graphics. I thought, ‘This is really cool – I can draw pictures with computers.’ That’s what got me intrigued with it.” 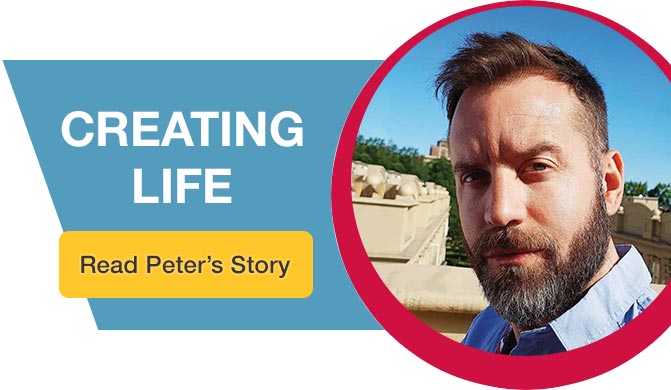 By the time she got to the University of Guelph, she was already hooked on computer-generated animation.

A 2004 computing and information science grad, Middlemiss has made a name for herself in the animated film world. Today she is a key member of DreamWorks’ advanced creative technology team.

She says U of G offered her a combination of superb training in computing and visual arts instruction that expanded her creativity – an ideal fit.

“I picked fine arts as my area of emphasis and it was amazing. I got to do printmaking, drawing and art history. It was huge to be able to do both computer programming and fine art at university.”

That fertile combination acted as a springboard into additional training in animation once she graduated from U of G.

Scroll through the credits and you’ll find Middlemiss listed as the motion capture engineer on the hit animated film How to Train Your Dragon: The Hidden World, and for her work on Kung Fu Panda, Captain Underpants: The First Epic Movie, Trolls and Home, some of the hottest animated films of recent years.

After U of G, Middlemiss took evening animation courses at Humber College. She landed a job at an animation company in Toronto and was part of the animation team for Grand Theft Auto V, a hugely successful media product.

She has worked at DreamWorks Animation for five years and has received the company’s technical achievement award for innovation.

Her field isn’t an easy one to get into, she says. While it’s highly rewarding, the work is challenging, and she needs to stay on top of technological changes. Studying math and science helps.

“It’s really challenging and rewarding to program and be in the profession,” she says. “Especially to the females in high school, I want to say keep with it, find a mentor and don’t be discouraged. Be confident.”

Passionate about fostering a tech environment that includes more women, Middlemiss is active in TECHWomen, a Comcast NBC Universal initiative to empower, connect and support women leaders in science, technology, engineering and mathematics. 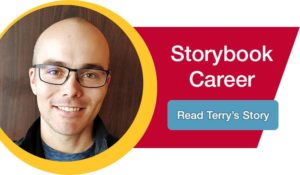 “It’s an important issue for me because there’s just so few women in technology. It’s hard to be heard and it’s hard for many women to continue in such a male-
dominated field.

“It’s really important to try to get more women into jobs, management and leadership positions, and balance the field 50/50. We have a really long way to go, but we really need that diversity of thought with females.”

She says attending U of G taught her to be resourceful – and to search for answers.

“I learned that I didn’t have to know the answer to everything, I just had to find the answer,” she says.

“I learned that it’s OK to ask somebody, it’s OK to search and to spend time really learning. It’s not like you have to have everything at the ready in your brain. That really helped me in my career.”