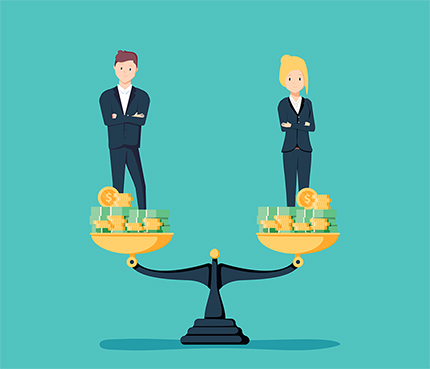 Having a PhD on your résumé is key to closing the gender pay gap, according to new University of Guelph research.

In a first-ever study, researchers found the higher the level of education upon graduation, the smaller the gender pay gap.

The study, published in the journal Higher Education Policy, revealed the average wage for recent PhD grads is the same for men and women.

“This is the first time that I’ve seen at any level that there is no discrepancy in earnings between males and females,” says Prof. David Walters, Department of Sociology and Anthropology. He worked on the study with departmental colleague Prof. Stephanie Howells and lead author Anthony Jehn, a former U of G master’s student.

The researchers focused on data from three years after graduation, which offers a glimpse into labour market outcomes before the influence of factors such as maternity leave and level of occupational commitment, Walters says.

The study found average pay during the first three years after graduation is around $70,000 for men and women with PhDs.

However, women master’s graduates earn about $7,500 less than their PhD counterparts.

The wage gap is smallest among liberal arts undergrads. The largest wage gaps exist for undergrads in math, computer science and engineering, also among the highest paying fields.