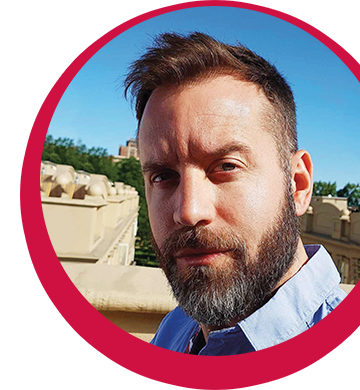 Like his colleague Tory Miles, animator Peter Dydo created art incessantly throughout his life. And, like Miles, he worked on the Academy Award-winning The Shape of Water.

“I’ve been drawing and painting since I can remember,” says Dydo, an animator with Mr. X in Toronto. He has also worked on The Silence, Shazam! and Resident Evil: The Final Chapter. He’s been in the business since 2005.

“Growing up, I was always encouraged to keep doing art,” he said. “I didn’t pay attention to the harsh realities of ending up a starving artist. Instead, I happily stayed on a path that led me to fine arts and animation.”

A lifelong fan of movies, Dydo says his high school art teacher, also a U of G grad, recommended that he enrol in the University’s fine arts program. Dydo studied drawing, painting, sculpture and art history.

“I did get a glimpse of what life would be like as a starving artist,” he says. “Fortunately, computer animation became more prominent. It was an exciting, somewhat new field.”

He took further training at St. Clair College in southwestern Ontario, where he immersed himself in traditional hand-drawn animation and computer animation.

“I had the advantage of having fine arts training from U of G, so I could focus more on the art of animation itself. That fine arts foundation was a boon for my work and helped set me apart from the pack, even to this day.”

Successful animation has a magic to it, he says. Manipulating pixels can elicit an emotional response in the viewer.

“This type of work allows you to create life where there wasn’t life previously. It basically allows one to play God with low stakes.”