OVC Class of 1966 grads Ross Fitzpatrick, Ted Clark and Don Wilson are the masterminds behind a new vintage veterinary exhibit opening at Calgary’s Heritage Park Historical Village. Through their non-profit, they have launched a fundraising campaign for the exhibit honouring the 300 Canadian veterinarians who served in the First World War and marking the 100th anniversary of the war’s end. More information is online at vintageveterinaryexhibit.ca.

Pamela Stagg, BA ’74, was among botanical artists across Canada honoured during the Art of the Plant exhibition at the Canadian Museum of Nature in Ottawa. Stagg delivered the keynote address at the exhibition’s opening.

Wayne Spencer, B.Sc. ’75. Retired since September 2003 after a career with the Government of the Northwest Territories Fish and Wildlife Service and the Canadian Wildlife Service. Spent 13 years above the Arctic Circle in the communities of Cambridge Bay and Pond Inlet, as well as Inuvik and Yellowknife. Linda and I have been together for 48 years come November 2019. Our children, Dana and Kristofor, have presented us with five grandchildren ages 13 to 18, including four gifted wrestlers.

Paul Sharpe, M.Sc. ’80, is lead author and editor of a new textbook, Horse Pasture Management, co-authored by 10 other specialists across Canada. Sharpe taught at U of G’s former Kemptville campus. He met his wife, Helen MacGregor, M.Sc. ’80, while both were graduate students in animal science at U of G.

Frank Y. Wong, BA ’81, joined Florida State University’s College of Nursing, where he will work in the Center for Indigenous Nursing Research for Health Equity. Wong is widely known for his studies on sexual health and substance abuse among Asian American and Pacific Islanders.

Lynn Smurthwaite-Murphy, BA ’87, has become president and CEO of StarTech.com, an IT technology tools company. She was director of the Halton Children’s Aid Society and has served on the advisory boards of some top IT companies in North America.

Jeffrey Hauswirth, BA ’82, was named vice-chairman of FPL, a global professional services firm. He was with Spencer Stuart for 25 years.

Scott Reid, DVM ’87, serves on several human hospital boards, providing input on issues from ethics and governance to strategic planning. “It has been a great learning experience and you feel that you are contributing to your community.”

Christine Langevin, B.Comm. ’88, recently obtained her chartered director designation from the DeGroote School of Business and the Directors College. She has served as the principal of a boutique accounting firm for more than 20 years.

Matt Johnston, B.Comm. ’96, co-founded Collective Arts Brewing, which combines craft beer with promoting emerging artists and musicians. Located in Hamilton, Ont., the brewery has won numerous awards and has a gallery showcasing artists who have designed their beer cans and labels.

Krista DuChene, B.A.Sc. ’00, aka Canada’s Marathon Mom and member of the 2016 Olympic team, will run in the Boston Marathon in April. Last year she placed third overall and first in the master’s division. DuChene, a dietitian, met her husband, Jonathan, B.Comm. ’01, at U of G; she studied human nutrition and was an ice hockey star, and he played volleyball. They live in Brantford, Ont. 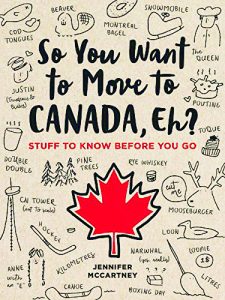 Jennifer McCartney, BA ’03. Her latest book, The Joy of Leaving Your Sh*t All Over the Place, is a New York Times bestseller. Her forthcoming book, called So You Want to Move to Canada, Eh?, is a handbook about Canada for Americans.

Arun Dhanota, MA ’05, is pursuing a PhD at Queen’s University while working as professor with the Police Foundations Program at Humber College.

Beth MacDonald, B.Comm. ’07, currently living in Portugal with her husband while running sales for the HempFest Cannabis Expo across Canada.