Just out of high school, Tim Lambert came to the University of Guelph with a great Canadian dream. Quick and strong on a pair of skates and tough in the corners, he wanted to be a hockey player.

Schools across the country courted him, but he chose U of G because it was exceptional in his other passion for agricultural science. It was that latter interest that took him places and helped him change the world for the better.

Lambert receives this year’s Alumnus of Honour among U of G’s Alumni Awards of Excellence.

Now chief executive officer of Egg Farmers of Canada (EFC) in Ottawa, Ont., he received his bachelor of science degree in 1983 in animal and poultry science. He cherishes the time he spent at U of G, remembering vividly his runs through the Arboretum and good times with a group of buddies who became lifer friends.

“I was interested in science and I always thought that agriculture was the perfect application of science,” he says. “I think that providing food to people is one of the most honourable professions that one could be in, so I have always been proud to be a part of that.”

He never got to play hockey for the Gryphons, a disappointment that proved to be an opportunity in disguise.

“One of the reasons I came to Guelph was for the science program and to be involved in agriculture, but I was also approached to play hockey at Guelph. I came and made the team, but then I got injured. I had knee surgery the next summer.”

The dramatic turn of events forced him to redirect the energy he dedicated to hockey into his academic work and career pursuits.

“I went from thinking about getting my degree, having fun and playing a varsity sport, to needing to take a really serious look at taking the competitive drive and intensity that I always had for sport and applying that to my academic pursuits and then to my career.”

He found a way to turn that negative into a positive.

“When you go through something that’s a negative, you realize how you can turn that into a positive. It happened after my first year and it was just kind of that life-changing, gear-changing moment where you go, ‘I’ve just got to grow up a little and look at things from a different perspective and through a different lens.’”

After graduating, Tim worked for the Ontario Ministry of Agriculture, Food and Rural Affairs, managing genetic improvement programs in the sheep and pork industries. In the early ’90s, he joined the private sector in a similar field. He has led EFC since 2003, an opportunity that he says has allowed him to make an extraordinary humanitarian impact.

Something that is truly making a difference. 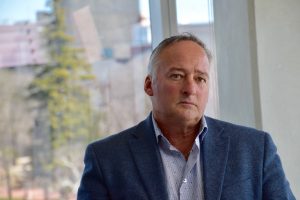 Of all the many things he has done to improve the egg industry and the world, his proudest accomplishment was to coordinate, through EFC, the building of an egg operation on the Project Canaan orphanage in Swaziland, Africa. In that country, 250,000 children have been orphaned by the HIV-AIDS pandemic.

The orphanage’s hen barns supply about 4,500 hard-cooked eggs to the nearly 190 orphans at Project Canaan and to more than 30 programs in the country — every day of the year. The project has fed more than 3.3 million eggs to orphaned children in Swaziland so far. Canadian egg farmers and businesses support the operation financially.

“Not only is malnutrition a big problem, but protein deficiency is just a huge obstacle for them,” he says. “The sad truth is, if a child doesn’t get adequate protein at an early age, they will never develop to reach their full potential. This is something that is truly making a difference.”

Businesses and organizations, says Lambert, have a broader responsibility to society and to our world.

With his guidance, Egg Farmers of Canada helped found the International Egg Foundation and became involved in other projects in Uganda, Swaziland and Mozambique. In drought-prone Swaziland, a 10-kilometre pipeline is being built to bring water from the mountains down to Project Canaan’s 2,500-acre farm.

Wherever he travels around the world, Lambert hears good things about U of G. Anyone who works in agriculture has heard of the University and has positive things to say about the institution, he says. “There are Guelph grads everywhere in the ag industry. The University of Guelph turned out to be a fantastic place and the right place for me. I’ve always been proud to say I am a U of G alumnus. It’s just such a well-respected, well-known educational institution.”