The secret is out. Robin-Lee Norris, respected former Guelph lawyer and volunteer extraordinaire, furtively painted Old Jeremiah, the University of Guelph’s iconic cannon, one night in the late 1970s. She had a little help from her friends.

“I will not forget that night,” says Norris, now the owner of a dispute resolution and business succession planning business.

“I’m admitting to it now because I believe the statute of limitations is over,” she adds with a laugh.

At that time, Norris was speeding through an undergraduate degree in sociology which she completed in two years – six straight semesters without a break. A night out at the pub and painting the cannon provided a much-needed break from her hectic pace of study.

But despite that pace, Norris always had time for volunteering. As a campus tour guide, she had the privilege of accompanying special visitors to the University. She once led eight representatives from the Nigerian government, all in full traditional robes, on a tour of the Elora Research Station. Transportation was by limousines, not altogether suited to the country roads and muddy entrances around the station. The scene, she recalls, was unbelievable. “That was a fascinating day,” she says.

Norris is the recipient of the Alumni Volunteer Award in this year’s Alumni Awards of Excellence program, an honour bestowed on her for incomparable dedication to volunteer work tied to the University and the city of Guelph. Since childhood, she has been inhabited by the spirit of volunteerism; she has maintained an unbroken association with U of G as a volunteer.

“Volunteering is absolutely a core pillar in my life.” She fully embraced the advice of her grandfather, who said we all have an obligation to leave the world a little better than we found it.

It began in elementary school, when she participated in a campaign to provide stuffed animals to children spending Christmas in the hospital. It felt so good to do good for others that she just kept doing it.

When she returned to Guelph after Osgoode Hall Law School at York University, she found that U of G had remained as important as ever to her. “It was the ideal spot to spend some of my volunteering energy – my time, my talent, my treasure.”

So many amazing and extraordinary people 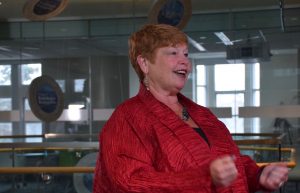 Soon after returning to the city to start her law practice, Norris began serving on the first of a long string of U of G committees, campaigns and boards, including the Board of Governors and Board of Trustees. She sat on the committee that worked to transform the campus sheep barn into Alumni Affairs and Development headquarters, and she oversaw fundraising for that project.

“All the things I was involved in taught me so much and introduced me to so many amazing people. I have sat and worked with and learned from and listened to just extraordinary people over my years at the University.”

Norris loved the Arboretum as a student, and the green space has held a special place in her heart throughout her life.

“The one place where I truly feel I made a difference was the work I’ve done with the Arboretum,” she says. “For me, it became that centre of health, a place for people to stop and catch their breath in a world where we don’t have huge opportunities to do that.”

The Arboretum, she added, provides the University and the whole of Ontario with a unique learning and research opportunity, its diverse population of trees offering insights into best growing practices, disease and pest control, and protection of tree species at risk and forest ecosystems.

She counts fundraising for the Arboretum and being involved in drafting its new master plan among the highlights of her volunteer work at the University.

What she learned in classrooms, on sports teams, as a tour guide and as a friend to many has served her well throughout her life.

“The things I took away with me, whether I knew it or not, came back into play in my legal practice. In the early days of my practice, I did a lot of land use planning that involved working with and understanding the farming community. All of that came from my time here at the University.”

Describing herself as a bona fide Type A overachiever, Norris advises young people not to do what she did as a student. Instead, she says, they should feel free to take a year off to discover who they are and what they want to become.

And she advises University students to volunteer from their passion and not because it fits into a career objective.

“Volunteer from the heart,” she says. “The friendships and relationship you form you will have for life. And you will make a difference.”

The University awarded Norris one of its highest honours in 2009, the Honorary Fellowship, for her significant contributions to the life and development of U of G. Beyond campus, she has also volunteered for numerous organizations.