It is a long and complicated path from evading Taliban threats in Afghanistan to transforming Canada’s beef industry, but that’s the route being traced by a former refugee now at the University of Guelph. 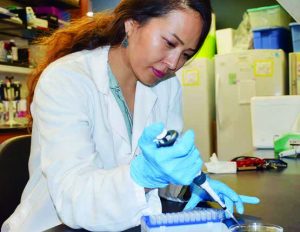 Nasrin Husseini is among an inaugural group of five graduate students who will receive new scholarships worth $50,000 per year as Arrell Food Institute scholars.

The prestigious graduate scholarships are among many new agri-food initiatives made possible through a $20-million donation – the single largest-ever gift in U of G history – from the Arrell Family Foundation. The foundation was created in 1999 by U of G alumni Tony Arrell, B.Sc (Agr.) ’67, and Anne Arrell, B.H.Sc. ’68.

The goal is to transform the global food economy through wider use of technology in agri-food and to further strengthen U of G and Canada as agri-food leaders.

It will fund new research chairs and scholarships — including those held by the inaugural Arrell Scholars, who come from Sri Lanka, Russia, Afghanistan and Canada — international food innovation awards and a prestigious annual conference.

U of G will provide matching funds of $20 million, for a total commitment of $40 million.

“This landmark gift will allow our University to address the defining challenge of our time: food security, safety and sustainability,” says president Franco Vaccarino.

“The Arrell family has shown incredible generosity and foresight in making this gift, and we are grateful to them for their faith in our agri-food prowess.”

U of G is the No. 1 agri-food school in Canada, with a 150-year history in agriculture and a global reputation for excellence, Vaccarino says. The University receives substantial provincial funding under its longstanding partnership with the Ontario Ministry of Agriculture, Food and Rural Affairs.
The Arrell Food Institute will build on U of G’s strong connections with government, international partners, industry, and communities, and help attract world-leading researchers, graduate students and experts, Vaccarino says.

Husseini is one example. As a child, she moved with her family to Iran to escape the ongoing war in Afghanistan. As a refugee, she was banned by the Iranian government from attending university. Only when the family returned to Afghanistan could she attend post-secondary education.

Her father pushed her to excel. “I got into veterinary school in Afghanistan when it was a huge deal for a girl to be a veterinarian. Every day, people would tell me to switch to another field, a field more proper for women, but I was not the type to give up.”

Husseini became the first woman to graduate from the veterinary medicine program after the Taliban period, finishing top of her class in 2010.

She taught English and computer skills to women, although occasional Taliban threats led her at times to cease teaching or to remove her business sign from the door.

After studies at Green River College in Washington State, she moved to Toronto for work. She visited U of G to see a friend, and grew interested in High Immune Response (HIR) technology developed by pathobiology professor Bonnie Mallard.

Husseini plans to adapt the HIR technology for use in Canadian beef feedlots to combat economically important ailments such as bovine respiratory disease, which costs North American beef producers more than $700 million a year.

“I really appreciate the Arrell Food Institute for this scholarship,” Husseini says. “They not only are helping a student through her master’s program, but they are also supporting a refugee girl to reach to her goals and find her dreams.”