Bondar, a University of Guelph alumna, vowed after her space flight to capture and share Earth’s magnificence in pictures, and to work to sustain its biodiversity and natural beauty. Her current exhibition at the Art Gallery of Guelph (AGG) is a rare glimpse of Canada’s many natural environments. The show opens today and runs until Dec. 17.

“Something that I’m trying to bring to people’s attention in terms of the diversity of the country is that we have different types of biological systems,” says Bondar in an interview.

“We have places that some people will never get to, and I feel that it is important for me, after my space flight, to talk to people about the very valuable piece of real estate that Canada has.”

Bondar completed an eight-day mission on Discovery in January 1992.

She describes the rare opportunity to look down on the planet from outer space as being plucked from a two-dimensional world and thrust into a three-dimensional one.

We know that the Earth is round, but seeing its actual curvature is mind-altering, she says.

Bondar says she hopes her photographs – some captured at ground level, others from an aircraft – inspire others to develop a personal relationship with the natural environment, and to enter the natural world with a renewed perspective.

That was also her motivation for creating the Roberta Bondar Foundation. “My foundation reflects what I firmly believe in, and that is, if we love something we will want to protect it,” she says. 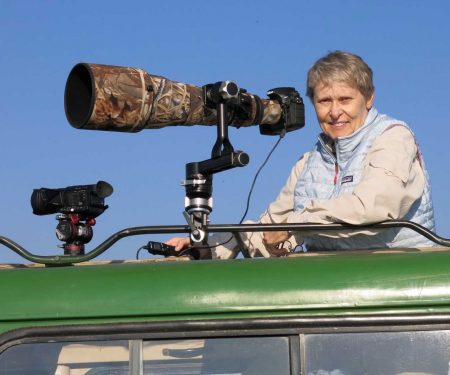 “I feel the role of my foundation, and my views since my space flight, is really to present the beauty of the world as it exists in the moment. We need to take some responsibility in trying to lessen the impact that we have as a life form on these wonderful natural systems.”

The photographs in the AGG show, called Light in the Land: The Nature of Canada, date as far back as 1999, and are part of Bondar’s extensive photographic explorations of Canada’s national and provincial parks.

Intentionally, the pictures include no human presence or human-made elements.

“We are egotistical enough, and there’s enough pictures of stuff that we do and the things that we create,” she says. “The natural environment has so much more complexity and layers that we still don’t understand. I want to show respect for that in the images that I’m able to create.”

Using her sense of sight to the fullest has long driven Bondar. Having grown up immersed in the powerful landscape around Sault Ste. Marie — her father was an avid photographer — she formed a lifelong attachment to the natural world.

She says she was encouraged to explore that world with a sense of independence and creativity, and she continues to challenge herself as a photographer.

“I understand better how to stimulate and push myself into a place where I’m trying to take my little human brain and try to understand this much greater and bigger thing that’s called the natural environment.”

After studying zoology and agriculture at U of G, she pursued medical studies in neuro-ophthalmology, or the study of brain disorders that affect vision.

“I’m deeply ingrained in the physiology of vision, and the things that affect vision and how we incorporate vision in terms of our view of the world,” she says.

She learned about the University of Guelph during her summer job at a forest insect laboratory in Sault Ste. Marie whose scientists included many U of G graduates.

Few women studied science at the Ontario Agricultural College when she enrolled in the late 1960s. At the University, she coached archery, played varsity basketball, and took courses in veterinary science and communications that were to prove invaluable later in life.

“Pursuing scientific and medical studies in neuro-opthalmology, she already had a deep interest in how we see the world around us,” McCabe says. “Her flight on the space shuttle Discovery 25 years ago clearly had a dramatic impact – the sheer distance of that perspective from space drove home the Earth’s vulnerability for her.”