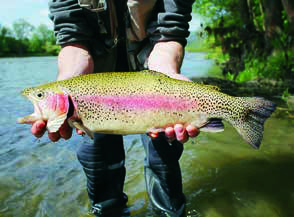 It’s long been known that fish can change the size of their hearts depending on water temperature. Now a University of Guelph professor has discovered the protein that makes this happen – a finding that may help treat or prevent heart damage in humans.

“Fish put on collagen in the winter and take it off in the summer,” says integrative biology professor Todd Gillis, whose research was published in the Journal of Experimental Biology. “They do this so they can keep swimming over a broad range of temperatures.”

Fish hearts and human hearts share similar structure. Under stress, such as a heart attack, the body accumulates tissue around the heart, which can hinder its function.

“If we can find out how fish are able to naturally add and remove this tissue, we can develop strategic treatment for humans that establishes a more controlled way for the heart to repair itself after a heart attack,” Gillis says.

His research team examined cells in hearts of rainbow trout that regulate collagen. The researchers found that exposing cells to the protein TGF-Beta1, known to help regulate connective tissue, caused those cells to enlarge.

“The theory is that when the fish’s heart gets stressed under the colder temperatures, it has to work harder, which causes the release of the TGF-Beta1 protein,” says Gillis.

The researchers hope to learn how fish remove collagen from the heart in warmer months. “The ultimate goal is applying what we learn in trout hearts to human disease.”

High-flying technology improves research on the ground
What’s in Your Sausage?
U of G Opens High-Tech Food Labs
Genetics Affects How Kids Snack
Facebook: friend or foe for health professionals?