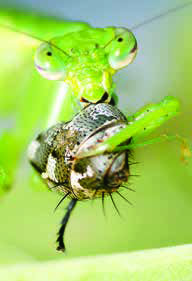 Fear alone may be enough to cause vulnerable species to go extinct.

Even the predator’s smell alone can cause population decline. The smaller the prey population is, the greater the risk of extinction.

“This finding has implications for species already endangered and living in smaller populations because it shows they are more vulnerable to predator fear,” Norris says.

“It seems once a population reaches a certain size, fear alone may lead to its extinction.”

The researchers suspect that flies feel safety in numbers, as their vigilance increases when numbers decline.

The finding may help explain a long-standing biological conundrum in population size and extinction, known as the Allee effect. The study was published in the journal Proceedings of the Royal Society B.

Wildfires turning boreal forests from carbon sinks to carbon sources
There is a Cost to ‘Bee-ing’ Too Smart
Pet owners aren’t adequately socializing their puppies
U of G Researchers Publish First-Ever Scientific Study on Cannabis Production
Is Eating ‘Ethically’ Only for the Wealthy?