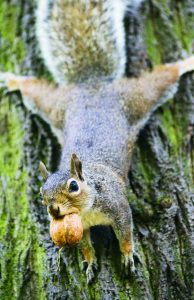 When it comes to survival in the squirrel world, first out of the nest is best.

“We found being born earlier than the other litters in your neighbourhood was a key factor in survival,” says post-doctoral researcher David Fisher, who worked on the study with integrative biology professor Andrew McAdam.

“This is because if you are born before your neighbours, you can leave your nest first and find a vacant spot to store your food for the winter.”

The study, published in the international journal Evolution, is one of the first to show multilevel natural selection, which occurs when traits of a group such as a herd or flock influence the success of individuals, Fischer says.

Young squirrels usually travel no farther than 100 metres from home. Their chance of survival beyond the next four months or so is only 25 per cent, largely dependent on whether they find a vacant territory.

“Young squirrels can’t oust adult squirrels from their territories, so early-born litters have an advantage because they are able to begin searching for vacant or new territories first.”

This study shows that an early birthdate – a heritable trait — helps red squirrels living in densely populated neighbourhoods. However, Fisher said he hasn’t yet seen an overall trend toward earlier births.

“When we expect to see evolution, but no evolution occurs, this is called evolutionary stasis.”