At 92, Herbert (Herb) Norry, B.Sc. (Agr) ’52, M.Sc. ’66, says he is the oldest member of his Kiwanis Club, his exercise group and his hunt club, but is not the oldest resident at the Richmond Woods by Sifton, a seniors’ residence in London, Ont., where he has lived since 2014.

Peter Johnson, Dipl. ’59 and B.Sc. ’65, moved to London, Ont., from Vancouver Island to be closer to family. He is setting up new beehives to help London’s pollinator population and support efforts to improve urban agriculture.

Peter Peachey, B.Sc. ’67, left the hospitality and retirement industries for a career in condominium management/business. He has worked for Percel Inc. for the last seven years, managing seven condominium corporations.

John Scott, B.Sc. ’70, received the Sovereign’s Medal for Volunteers from the Governor General for his work with Lyme disease patients and his research on ticks and Lyme disease across Canada.

John Henderson, B.Sc. ’74, was inducted into the North American Maple Syrup Hall of Fame in Croghan, New York. He regulated maple syrup production with the Ontario Ministry of Agriculture, Food and Rural Affairs, and was a consultant to the International Maple Syrup Institute.

Susan Lovelady, BA ’74, is a registered social worker in private practice and loves her work.

Michael Zigler, B.Sc. ’75 and DVM ’79, completed an M.Sc. in international animal health at the University of Edinburgh in 2013. Daughter Melissa is a third-year veterinary student in Edinburgh.

John Vermeer, B.Sc. ’76, retired as a college professor and taught English in China. He is now enjoying life in a small town and thinking about other ESL/travel opportunities.

Antonietta (Toni) Dona, BA ’78, retired from teaching full-time but still supply teaches due to the shortage of French-speaking teachers.

Michael Kral, BA ’79, has taught at the universities of Manitoba, Windsor, Yale and Illinois at Urbana-Champaign, and did community-based research in Nunavut for 20 years. Now teaching at Wayne State, he is looking to connect with other U of G grads.

Steven Oliver, B.Sc. ’79, and his wife, Barbara, attended the 100th anniversary of the Battle of Vimy Ridge at the Vimy Memorial in France in April. They also toured London, Amsterdam, the Normandy Coast and Paris. Their son, Peter, graduated from U of G in 2016; daughter Laura is an analyst at ArcelorMittal Steel in Hamilton, Ont.

Each March, Brenda Trask, Mary Lynn McPherson and other members of their B.Sc. ’80 class take part in the OAC alumni curling bonspiel. They have an annual tradition of “doing lunch” with their former agricultural economics professor, T.K. (Sandy) Warley, and his wife, Anita. Brenda and Mary Lynn say Sandy continues to be a mentor and confidant. (PHOTO INCLUDED; tagged “Warley gathering photo)

David Sax, MA ’83, retired as executive director of Catholic Family Services of Regina after 21 years and moved to Nanaimo, B.C., in May to be closer to family.

Jeptha Ball, B.Sc. (Eng.) ’84, retired as a flood safety engineer with the Province of British Columbia. He is enjoying backcountry hiking and whitewater canoeing in the summer and snowboarding in the winter.

Paul Fitzpatrick, BA ’86, recently celebrated his fifth year in business as an independent real estate broker in the Wellington and Waterloo regions.

Mark Fetterly and Andrea Barker, both B.Sc. ’81. Andrea recently retired after 27 years as a citizenship and immigration officer with the federal government. Mark is a biologist with the Department of Fisheries and Oceans Canada. They enjoy remaining in contact with other U of G grads. 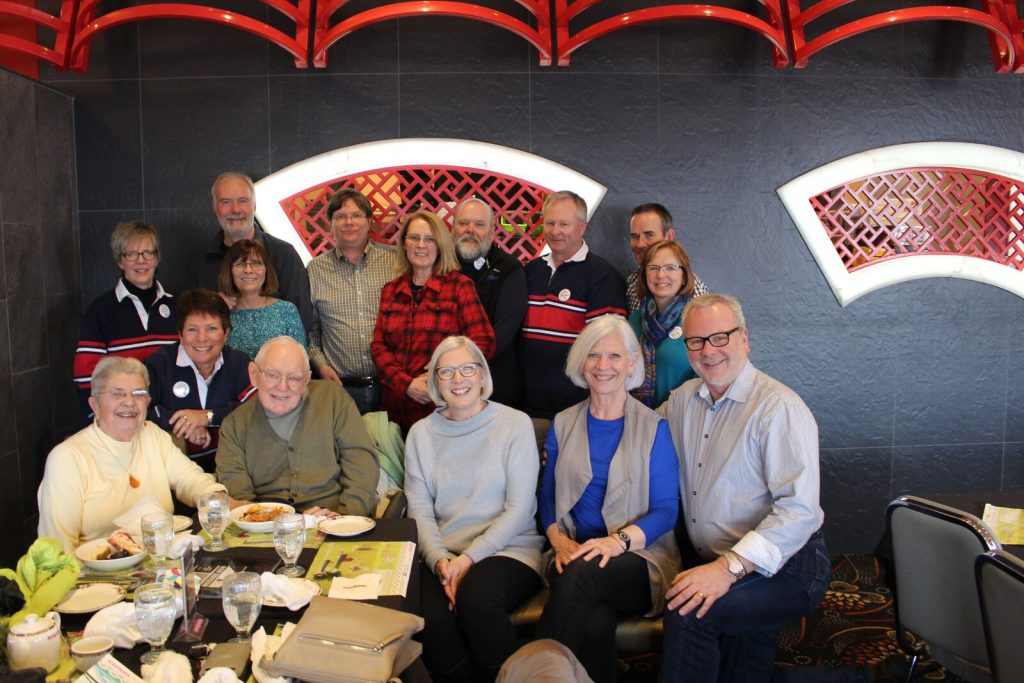 Caroline Valeriote, B.A.Sc. ’88, is co-owner of PV Tax Service in Guelph and Waterloo Region along with her husband, Patrick, and daughter Anita.

Richard Besworth, BA ’88, and Denise (Seghal) Bessworth, B.Sc. ’87, live in Georgetown, Ont. Richard teaches secondary school math in the Peel District School Board, and Denise is a secondary guidance head for the Halton District School Board. Their sons, Jake and Cole, are U of G students in engineering and psychology, respectively. Daughter Haley graduated from Western University but took classes at U of G.

Timothy Borho, B.Sc. ’90, is the commercial agronomist and silage specialist for Dow Seeds and spent seven years as the territory sales representative for Dow AgroSciences.

Ed Barre, PhD ’92, is a human nutrition professor at Cape Breton University and received the President’s Award of Excellence in Research in May.

Christopher Parkinson, B.Sc. ’92, brought his son to U of G to visit the MacNaughton observatory, and was proud to learn that the first aid team he helped organize in 1990 is still active.

Kumar Mallikarjunan, PhD ’93, was appointed head of the Department of Food Science and Nutrition in the College of Food, Agricultural and Natural Resource Sciences at the University of Minnesota.

Kristine Chalmers-Gibbs, B.Comm. ’95, is celebrating 15 years with Moxie’s Grill and Bar, and credits the company for helping her grow and change professional paths.

Margaret Hutchinson, PhD ’96, visited Guelph in June after 21 years. She is the principal investigator for a Kenyan team in a project involving India, Tanzania, Sri Lanka, Tanzania and Trinidad and Tobago. Also involved are Hutchinson’s U of G plant agriculture professors Al Sullivan, Jayasankar Subramanian and Gopi Paliyath. She plans to encourage her grandchildren to attend U of G.

Kristine (Tina) Sartori, B.A.Sc. ’00, was named executive director of the Montessori Academy of London, Ont. She joined the school as a teacher 16 years ago and has worked in admissions and development.

Sandra (Schultz) Venneri, B.Sc. ’02, runs Nutrition Bites, an education-based business. The company was a finalist for the 2017 Mompreneur Startup Award.

Nilay Lad, B.Comm. ’04, has worked with financial institutions for more than 14 years, and is the founder and CEO of JustCompare.ca.

Krista Snader, M.Sc. ’06, is moving to Nairobi, Kenya, with her family to work on water, sanitation and conservation projects with the Mennonite Central Committee.

Alana Evers, BLA ’07, works for the City of Mississauga, is a volunteer ambassador at Sheena’s Place in Toronto and planned her class’s 10-year reunion activities.

Reilly Scott, BA ’09, is a musician in Kenora, Ont. She recently released her second single and a music video, and has launched a kickstarter campaign to raise funds to release an album. Information at reillyscottmusic.ca.

Michelle Clarabut, MA ’12, completed a PhD in the School of Modern Languages, Literatures and Cultures at Royal Holloway, University of London.

Kelly Greig, B.Sc. ’12 and M.Sc. ’15, and Peter Kraska, M.Sc. ’15, were married in September. Kelly celebrated her fifth anniversary with a crop protection chemical company, a job she secured immediately after finishing her undergraduate degree.

David Lawless, B.Sc. ’12, has travelled around Canada to learn about the diversity of the energy sector as a fellow of Your Energy Future, a national policy and leadership development program. He will help develop national energy strategies.

Anita Acai, B.Sc. ’14, completed a master’s degree at McMaster University and has started a PhD in the departments of Psychology, Neuroscience and Behaviour, and Surgery.

Christina Van Bakel, B.Sc. ’15, is in her second year at the School of Dental Science, Trinity College Dublin, and recently won a Trinity Foundation Scholarship.

Jessica Wojcik, B.Sc. ’16, was married in March 2016, one month before finishing her degree. She bought her first house in Listowel, Ont., in April.

Gabrielle Psotka, B.Eng. ’17, is excited to start a new position at Canadian Nuclear Laboratories in the waste management operations department.