From sculpture to performance, community art sparks imagination, interaction and ‘on the fly’ critics 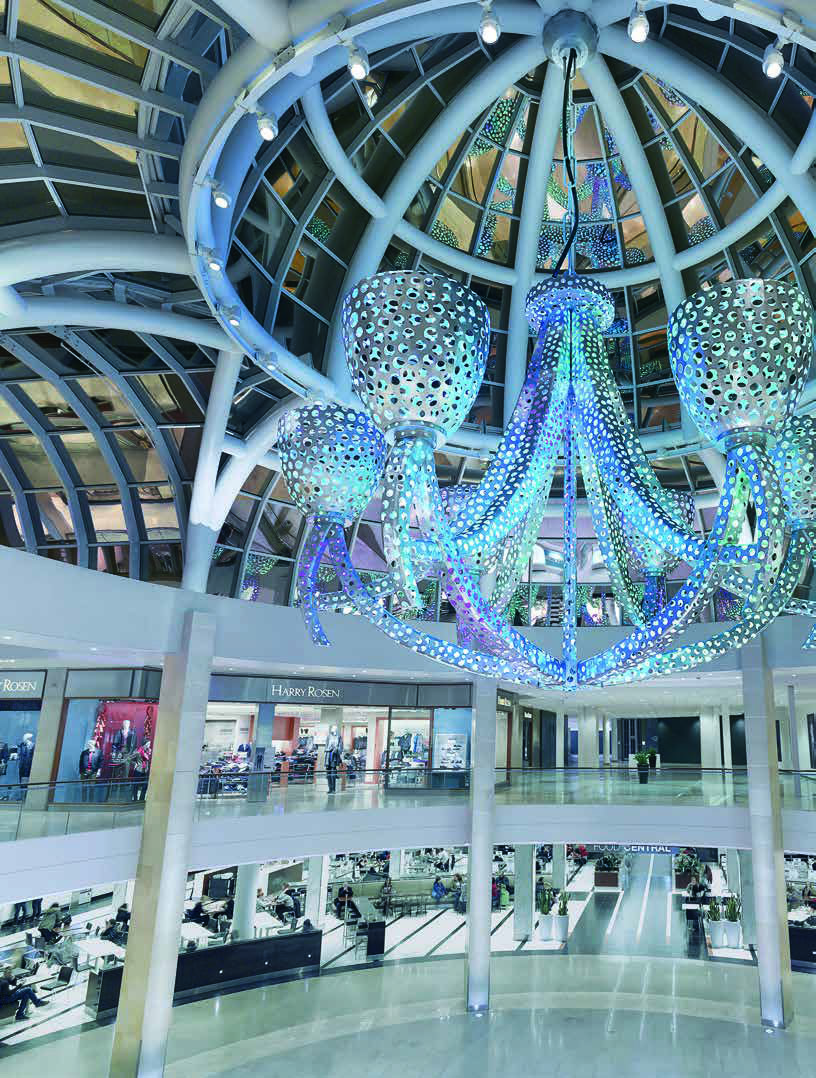 “A waste of taxpayer dollars.” That was one charge levelled in a newspaper article after the unveiling of a Toronto installation project by the art duo of Christian Giroux and Daniel Young. Other voices chimed in about Nyctophilia, asking why funding hadn’t been used instead to fix basic infrastructure, and complaining about neighbourhood disruption during and since the installation of what some locals called the “pole farm.”

Hardly an auspicious reception – but not an altogether unexpected one, says Giroux, a professor in U of G’s School of Fine Art and Music (SOFAM). Public art often sparks a love-it-or-hate-it reaction, says Giroux, who has learned to take the long view of installations – his own and those of other creators. Public art often draws vociferous responses, but then what form of art doesn’t? From Toronto’s Nyctophilia to the University’s Gryphon statue, U of G experts say assessing any work of public art is a matter of balancing sometimes-competing interests and tastes – not to mention changing values and viewpoints on historical figures, including Sir John A. Macdonald and General Robert E. Lee, whose sculpted likenesses dot our cityscapes.

By definition, says Giroux, public art often invites controversy. Unlike gallery or museum works for which viewers need to go out of their way, public art is, well, public. Often constructed on an architectural scale and situated in prominent locations, a public artwork may be seen routinely by hundreds or thousands of passersby, all critics on the fly.

For the 2014 Nyctophilia in west Toronto’s Mount Dennis neighbourhood – one of half a dozen installations so far for the art duo — Giroux and Young erected 10 concrete utility poles bearing three dozen cobra-head streetlights on a stretch of sidewalk fronting the entrance to a retail strip. Their quotidian and familiar industrial forms create an “almost surreal forest,” says Giroux, especially at night. “Thanks to a suite of randomized lighting programs, the work appears differently from evening to evening, altering the quality of space on a street corner in this working-class neighbourhood.” He says initial reaction ranged from hostility to puzzlement to outright excitement. A story published earlier this year in Canadian Art magazine said opinions are still mixed, but more people are coming around to the piece. Referring not only to Nyctophilia but also to numerous works animating our urban landscapes, Giroux says, “The work finds its way increasingly into the public imagination.” River Tiber, a Toronto indie musician, included the Mount Dennis installation in the music video for a track on his album Indigo released in 2016. Last year, the local business association held a Christmas market on the site; that group has also adopted the artwork in its branding materials. Some say the work has also provided a bit of a boost to a once-thriving manufacturing hub that has struggled with closure or relocation of numerous industries.

“When something alien enters the environment, it may appear hostile to local sensibilities,” says Giroux. “Over time they often grow to love it.” Just look at the resistance – including charges of “elitist” and “alien” — sparked in Toronto when Henry Moore’s The Archer was unveiled at City Hall in 1966. This year, a suggestion to move the piece from Nathan Phillips Square has kindled controversy in some quarters. Referring to Moore works, Giroux says, “They are now much-loved civic citizens. They have an identity. Now the public is willing to go to bat for them.” He’s already bracing himself for the reception of a new work called Three Points Where Two Lines Meet that he and Young will install in Toronto. Recalling the initial response to Nyctophilia, Giroux says, “I anticipate a similar arc of response.”

That new work was supposed to be installed a few years ago. But when it comes to public art, the creator’s imagination is not the only limit. Besides fickle public reception, the design and installation of a work can bump up against bureaucracy, budgets and competing interests such as infrastructure needs. Not that that’s necessarily a bad thing, says Giroux, who was turned on to public and contemporary art by sculptor Mowry Baden, a former professor at the University of Victoria. “It forces you to make clear decisions and constructs. There are compromises, but that’s one of the interesting things. Having constraints can free you in many ways.”

Not all works meet with resistance, he says. Look at Chicago’s Cloud Gate, unveiled in the city’s AT&T Plaza in 2006. Dubbed “The Bean” by locals, the work has been embraced as a symbol that shows up on souvenirs and that attracts tourists. “As a sculptor, I’m interested in place-making, how a sculpture is integrated within a space.” Closer to home, he says the same reception has greeted the Gryphon sculpture, installed at Stone Road and Gordon Street in 2014. Not only has the five-metre-tall bronze become a gateway to the campus and the city as well as a photo op for students and visitors, but the Gryphon also embodies the artists’ spirit, says Giroux. “I can recognize them in it.”

“They” are another artistic duo called FASTWÜRMS, a collaboration between SOFAM professors Kim Kozzi and Dai Skuse. They designed the Gryphon along with MFA graduates Nicole Vogelzang and Dustin Wilson. Kozzi and Skuse say they weren’t surprised at how quickly the work gained traction with viewers. If anything, they designed the Gryphon expecting that it would invite interaction. Skuse says they tweaked features such as the angles of the creature’s wings and ears – and even individual scales on its body – to provide handholds for people clambering on the statue.

The work finds its way increasingly into the public imagination.

What surprised Skuse was the nearly immediate virtual presence that the piece engendered on social media. On the morning of the Gryphon’s unveiling, students walking past the site had their mobile phones out as a crane manoeuvred the bronze into place. “It was on Twitter within 15 minutes,” he says. Indeed, the piece even has its own Twitter account, as with several other public artworks in Guelph (see sidebar). Adds Kuzzi: “The Gryphon comes from historical imagination but there’s also the history it begins to create.” From photos to tweets, she says, social media “becomes part of the history of the work.”

Beyond potential photo ops, Kozzi and Skuse built their statue on layers of memory and mythology that might help explain its resonance on a university campus. The duo drew upon John Tenniel’s illustrations of the gryphon character in the first edition of Alice’s Adventures in Wonderland by Lewis Carroll, the pen name for the English mathematician and logician Charles Lutwidge Dodgson. Elements of that book and his other writings were inspired by mathematics. Skuse says the campus Gryphon evokes interdisciplinary ideas and connections – even between seemingly unrelated things — that are embodied on a university campus. The eagle-lion chimera of classical mythology was regarded as a guardian of treasure; hence the U of G sculpture’s proprietary grasp of a book, representing truth and knowledge.

That campus gateway is a threshold for students, not unlike the rabbit hole for Alice. Says Skuse: “It represents that idea of acquiring knowledge with mystery and involvement and adventure. Entering university is a big jump.” Whether or not students and visitors snapping selfies think of the layers of time embodied in the creature, he says the Gryphon symbolizes not just the University but also the idea of the “university” – what he calls “a place where knowledge is not governed by simplistic rules of habit or unexamined political rules. That spirit of public inquiry is built into the sculpture.”

Little surprise, then, that FASTWÜRMS encourages public interaction with their work – and with this piece in particular, in various forms. The Gryphon image has already been reproduced on coffee mugs and has been replicated as a souvenir pewter paperweight. A new miniature version designed this year draws yet another cross-disciplinary connection, this time to U of G’s food and agricultural strengths. Responding to a request from Malcolm Campbell, vice-president (research), SOFAM design engineer John Phillips led a project to replicate the Gryphon in the school’s digital haptic lab using bio-composite materials. Turned out on a 3-D printer, the item is a prototype for potential replicas that might be mass-produced for use as gifts or promotional items. “We like public engagement,” says Skuse.

Whether you hold it in your hand or rub the bronze nose of the original for purported luck, a public art piece such as the Gryphon offers a physical and tactile experience. What’s more solid than a public monument sculpted from bronze or stone? But public art also includes more ephemeral pursuits such as music and dance, says Prof. Ajay Heble, School of English and Theatre Studies, and founder of the Guelph Jazz Festival. (He ran the event for more than 20 years before stepping down as artistic director in 2016.) “We often think of public art as a permanent thing, a sculpture. It’s interesting to think of performance as public art, especially improvisational music. It’s ephemeral. Things happen and then they’re gone.”

Heble, who heads U of G’s International Institute for Critical Studies in Improvisation (IICSI), says musical collaboration animates public space and offers tools for community-building and resilience. “Public art has been a large part of what we’re doing with the jazz festival and with IICSI,” he says. “I’m interested in bringing innovation and especially creative practices to places where they’re not expected.” This past summer, IICSI held a weeklong camp on the Gaspé coast called Musical Improvisation at Land’s End. The event encouraged participants to work with professional improvisers, developing listening and collaboration skills that Heble says are needed for adapting to and anticipating change. He says those kinds of skills might also ultimately be used in the Gaspesie community itself to stem a youth exodus.

Here in Guelph, he has connected improvisers with the Kidsability Centre for Child Development for the past 10 years. “Creativity and innovation are vital tools for building resilient communities and adaptation to change,” says Heble, whose team received the 2016 Impact Award from the Social Sciences and Humanities Research Council. “We learn from parents that kids have new levels of self-esteem and leadership. They communicate differently and listen more effectively.”

On the U of G campus, the Gryphon statue is only one well-known example of a public artwork that invites interaction.

The Begging Bear was installed in front of the Art Gallery of Guelph (then called the Macdonald Stewart Art Centre) in 1999. Formally called the Canadiana/Begging Bear, the bronze statue is routinely dressed and adorned, a use welcomed by sculptor Carl Skelton.

Similarly, Old Jeremiah in Branion Plaza has long been used as a painted message board for everything from pub announcements to birthday greetings – and even the occasional wedding proposal.

The cannon was hardly intended as an artwork when it was cast in George III’s day. But its use today makes it more sculptural icon than fieldpiece.

That’s why instructor Mike Ridley included it – along with the Gryphon and the Begging Bear –in his “stationary crew.”

That’s Ridley’s unofficial moniker for a handful of public artworks on campus and in downtown Guelph that are the subject of his first-year seminar of the same name.

Downtown icons include the Family in the Fountain in St. George’s Square, John McCrae’s statue at the Guelph Civic Museum and the bust of Guelph founder John Galt in Market Square.

In The #StationaryCrew Project course, students discuss the meaning and significance of the works, including their historical and cultural aspects, their contribution to a sense of place, and what their modern-day uses say about the icons and about us.

Each of the artworks even has an anonymously authored Twitter account. One entry posted last December “by” the Gryphon read: “Need luck for your exam? Rub my beak. I promise it works.”