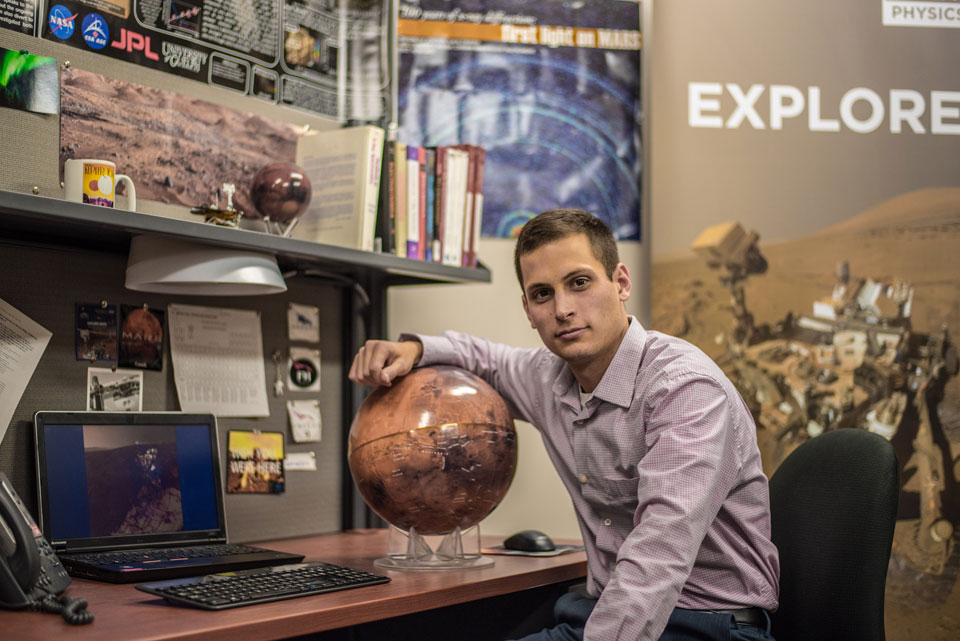 More than five years ago, Scott VanBommel watched a rocket roar into the sky, propelling the Curiosity rover to Mars.

Now the University of Guelph student hopes to become one of Canada’s next astronauts, a prospect that may line him up to be among the first humans to blast off on a voyage to the red planet.

In February, VanBommel was among 72 astronaut candidates shortlisted by the Canadian Space Agency (CSA). The list also includes U of G grads Matthew Bamsey and Olathe MacIntyre. VanBommel was one of nearly 4,000 applicants last summer after the CSA announced its current competition.

This summer, VanBommel will complete his PhD. He’ll also undergo numerous CSA tests designed to probe his physical and mental fitness for working in space, including everything from potential missions on the International Space Station to a possible voyage to Mars. The agency will name two astronauts by August.

“Being an astronaut encompasses everything I enjoy,” says VanBommel, referring to constant learning, teamwork and science outreach.

When he came to U of G to begin his B.Sc. in 2006, he was thinking of becoming a teacher like his mom and dad.

He was drawn to physics early and enjoyed the problem solving in his first-year classes. In his fourth year, he worked on a project for the first time with Prof. Ralf Gellert, head of a

U of G research team that designed and calibrated an instrument carried to Mars aboard a roving science laboratory.

About the size of a Rubik’s cube, the instrument — called an alpha X-ray spectrometer (APXS) — is mounted on the rover’s robotic arm. Testing soil and rock samples, it looks for evidence that features on the red planet were sculpted by water, or that the planet might once have supported life.

VanBommel was still in high school when the rovers Spirit and Opportunity landed on Mars in early 2004. By 2010, Spirit stopped working. (Opportunity is still sending data to Earth.)

VanBommel studied data from Spirit for that senior project, and found himself hooked. “The death of Spirit was the birth of my career in space exploration,” he says.

It was about two years ago that he realized that his Guelph experience might lend itself to an astronaut career. Last summer’s CSA competition was the first call since 2009.

Current NASA plans include a Mars mission in the mid-2030s. VanBommel says the red planet was once much like Earth, and it’s still possible that Mars harbours signs of life.

“You could argue that the search for life outside Earth is one of mankind’s biggest questions,” he says.
—ANDREW VOWLES