On the surface, Tunchai Redvers and Garrett McFadden have little in common. She grew up in a small First Nations community in the Northwest Territories and struggled with her indigenous identity; he grew up in a middle- class family, playing hockey in a lakeside Ontario town. Today, Redvers is a graduate student, and McFadden is captain of the Guelph Storm hockey team and a first-year student at U of G.

The common thread they share isn’t obvious, but it affects up to 20 per cent of Canadian youth. Mental illness has touched both of their lives.

Now they’re using their personal experiences to raise awareness and make things better for others. 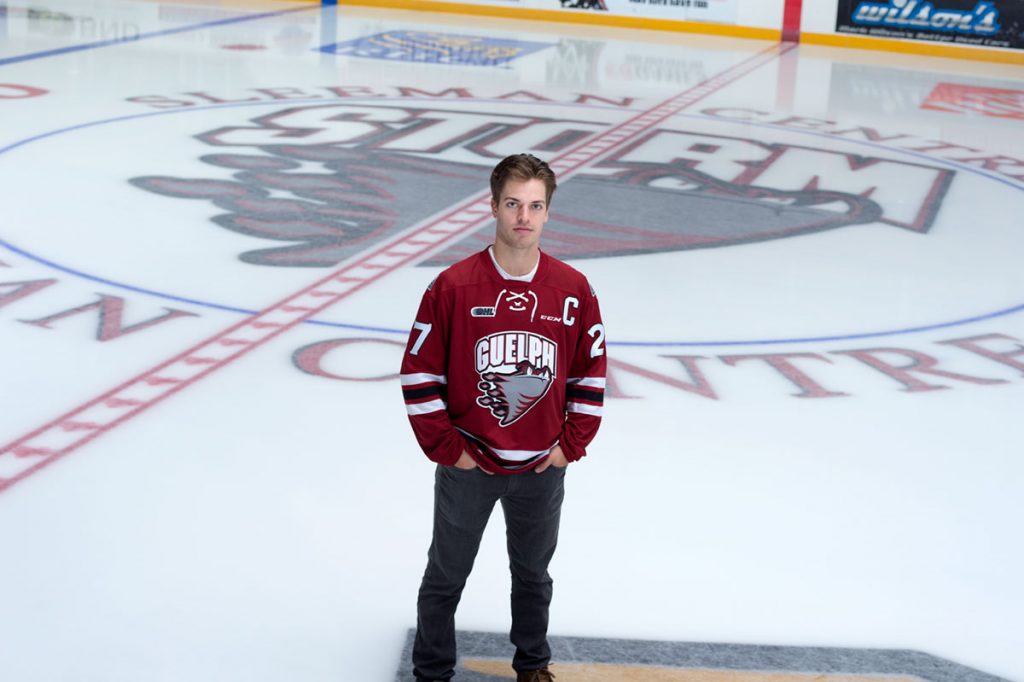 Breaking the stigma of “mental toughness”

He was already stickhandling roles as full-time captain of the Guelph Storm hockey team and part-time economics student at the University of Guelph. Now Garrett McFadden is devoting time to a new campaign intended to encourage young athletes to talk about mental health issues. It’s an initiative rooted in his brush with a teenage hockey player who took his own life several years ago.

“It’s important to make sure they know they have people to talk to and tools out there to help them,” says McFadden, speaking rink-side on campus.

Besides sharing information, he’s raising funds for the local branch of the Canadian Mental Health Association (CMHA) and for Wes for Youth, an online counselling and resource site for people with mental health issues. Jamie and Yolanda Cameron in Walkerton, Ont., established the program after their son Wes died by suicide at age 16.

That was just over five years ago, but the memory is still raw for McFadden, 19.

McFadden grew up in Kincardine, Ont., where he started playing organized hockey at age four. He and Cameron played in the Grey Bruce Highlanders minor hockey league, where they faced off against each other a few times.

[pullquote]“It’s important to make sure they know they have people to talk to and tools out there to help them.”[/pullquote]

Before Cameron’s death, McFadden knew nothing about mental health issues. Since then, he’s learned plenty about the topic — and about dealing with some of life’s ups and downs.

Drafted by the Storm at age 16, he moved to Guelph in 2014. That year, the team won the OHL championship, although rookie No. 27 saw little ice time. He missed much of the next season due to injuries. Last year, the team won only 13 games all year. Watching teammates’ reactions and behaviour as assistant captain during that bruising season, McFadden found himself learning about motivation, handling emotions and team play.

This year, the Storm defender was named captain. With a young team battling inconsistencies on the ice, that role has involved plenty of discussion with teammates, both collectively and one-on-one.

Under the new program, McFadden visits minor hockey teams around Guelph for hour-long talks. Typically he speaks to about 20 people at a time, although one session drew close to 50 people, including parents.

In his talk, he discusses the 2011 incident as well as struggles since then on and off the ice. Also part of the program is Jessica Schumacher, youth engagement facilitator with the CMHA. She provides information about teen suicide and mental health, including signs of stress, coping strategies and where to go for help.

Schumacher says McFadden’s combination of youthfulness and his status as a major junior player make him a role model for younger players, as well as a good foil for her own presentation.

“Garrett getting up to tell a story shows huge strength,” says Schumacher, who runs a CMHA peer suicide prevention and health promotion program in local high schools. “It also shows his vulnerable side, dealing with the loss of someone he knows.

“He’s able to talk on their level. It’s awesome to see someone they admire and look up to affected by mental health issues and still press on.”

That’s especially important for young athletes who often feel compelled to keep quiet about problems, she says. “You need to be strong, you’re not allowed to show emotion, and you’re supposed to keep things inside. It’s really important to reduce the stigma.”

McFadden gives about two to three talks a month — about as much as his hockey and school schedule will allow. He admits he was nervous about talking to kids about mental health. “What if I don’t make an impact?” he thought. “That’s what frightens me.”

He need not have worried.

“A few kids were barely blinking. They were just eyes on Garrett — full attention,” she says. “If he can see that he’s helped one kid, that’s a success to him.” –ANDREW VOWLES

Signs that someone may be struggling

Suicide is among the leading causes of premature death in Canada among people ages 15 to 24, according to the Canadian Mental Health Association (CMHA). Jessica Schumacher with the Guelph chapter of the CMHA, shares signs that someone may be dealing with a mental health problem:

•   Changes in appearance or mood.

•   Abuse or misuse of alcohol or drugs.

•   Withdrawing from family and friends. 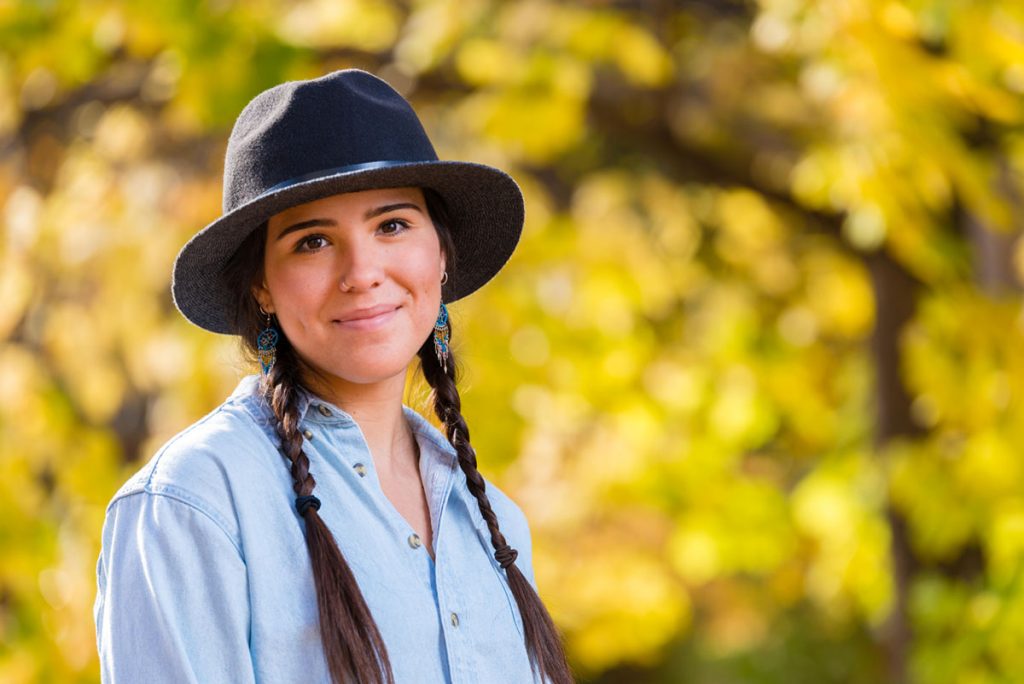 Hope and support for aboriginal youth

Tunchai Redvers didn’t have access to mental health resources while growing up in a Dene First Nations community of about 3,500 people in Hay River, Northwest Territories. Like many aboriginal youth in Canada, she experienced feelings of isolation and witnessed the effects of substance abuse.

“Drug and alcohol addiction was very present and visible growing up in the communities and also within my extended family,” says Redvers, BA ’16. “This visibility made it really normalized, and I saw a lot of people suffering and struggling.” Her personal struggles led to a suicide attempt at age 15.

Recent headlines have brought national attention to the high rates of aboriginal youth suicide in Can- ada, with victims as young as 10. Redvers points to Attawapiskat First Nation in Northern Ontario, where last year a state of emergencywas declared due to the epidemic of suicide attempts on the reserve.

“There really is a crisis in Canada,” she says. “We were just so overwhelmed by it and tired of hearing about these statistics, so we decided to do something about it.”

In fall 2016, Redvers and her filmmaker brother, Kelvin, launched a national campaign called We Matter to provide hope and support to aboriginal young people. It models itself after the It Gets Better campaign for LGBTQ youth.

The siblings created short videos of aboriginal role models across Canada who beat the odds to not only survive but also thrive. Aboriginal icons such as comedian Don Burnstick, Manitoba politician Wab Kinew and CBC reporter Angela Sterritt are among those who have shared their experiences in We Matter videos, which are posted on the website and have received thousands of views.

“I still get emotional watching some of the videos,” says Redvers. “There has never been a space like this before, especially for young people, to have so many positive, strong indigenous voices in one public spot.”

[pullquote]“There has never been a space like this before, especially for young people, to have so many positive, strong indigenous voices in one public spot.”[/pullquote]

She says We Matter gives the aboriginal community a platform to share their stories of hope and survival while turning tragedy into possibility. The website also wel-comes video submissions from any-one who wants to offer messages of support to indigenous communities.

Redvers attributes some of her own identity struggles to the lack of aboriginal role models she had while growing up and the negative portrayal of indigenous people in the media. Having access to a site like We Matter could have made a difference in her life, she says.

Redvers eventually moved to Yellowknife with her father and got involved in sports and other extracurricular activities available in a larger city.

When she came to U of G, she was drawn to international development studies for its focus on social justice and global issues. She travelled to India as part of the Global Youth Network and to Guatemala for a study abroad trip. A three-month internship with Right to Play brought her to Northern Ontario, where she helped organize sports-based summer camps for First Nations communities.

Redvers credits the Aboriginal Resource Centre at U of G for its support while she was a student. She’s now pursuing a master of social work degree.

According to Health Canada, First Nations youth face a suicide rate that’s five to seven times higher than for non-aboriginal youth, and Inuit youth have some of the highest suicide rates globally at 11 times the national average.

“I think it comes down to a real sense of hopelessness in youth and getting to the point where you feel nothing is going to get better,” says Redvers. She points to the lingering effects of colonization and residential schools (her grandmother grew up in a residential school in the Northwest Territories), substance abuse, loss of cultural traditions and lack of support for those who need help.

Since its launch, We Matter has reached more than one million people on social media and has received national media coverage. Redvers hopes the campaign will start a conversation about mental health, and help guide indigenous youth who are struggling with suicidal thoughts and hardship.

Where to get help

Seeking help for a mental health concern is one of the biggest hurdles for students, says U of G psychology professor Margaret Lumley. Students may blame themselves for not being able to deal with their own mental health concerns, and may fear being rejected or judged by friends and family.

“We know the higher the levels of internalized stigma that youth with mental illness possess, the less likely they are to reach out and ask for help or access services,” says Lumley. The University of Guelph’s Student Wellness Services offers various health and wellness services to students:

The wall of silence surrounding mental illness is beginning to crack, but the stigma hasn’t disappeared. University of Guelph psychology professor Margaret Lumley is helping students overcome the stigma by teaching “Mental Health and Well-Being,” a first-year course for students who have been diagnosed with a mental health issue.

“We know that in the university climate, the demand for mental health services has increased exponentially over the past decade,” says Lumley, who studies youth resiliency and mental health. “Universities across Canada have been struggling to meet that demand.”

Since 70 per cent of mental illnesses begin to develop in adolescence and early adulthood, when young people typically enter college or university, it’s a critical time for early intervention, she adds. Although mental health awareness is growing among students, “there’s still a long way to go,” says Lumley. Sharing their mental health concerns with other students who are experiencing the same challenges helps reduce feelings of isolation.

“Despite the difficulties they may have endured, they have so much to offer, sometimes because of those experiences,” she says.

[pullquote]“Despite the difficulties they may have endured, they have so much to offer, sometimes because of those experiences.”[/pullquote]

The course offers a supportive atmosphere for students to learn about themselves and each other through group activities and guest speakers, including upper- year students with mental health challenges. Topics include recognizing personal strengths, developing healthy coping strategies, and how to access mental health resources on and off campus and online.

Across campus, stress reduction and resilience skills are also built into academic programs, including initiatives in the School of Engineering and the Ontario Veterinary College, and other departments such as Athletics. –SUSAN BUBAK