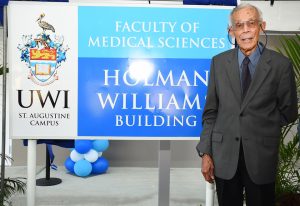 The University of the West Indies in Trinidad named a new building at its School of Veterinary Medicine, Faculty of Medical Sciences, in honour of Holman Williams, DVM ’49.

Donna (Winter) Jeffery, DHE ’50, and Donald Jeffery, BSA ’50, published Adventures in Foxieland, which tells the stories of animals living in Foxieland, a place that is based on their own farm in Northumberland, Ont. It is available on Amazon Kindle and soon in paperback. They have several other published stories and new writing projects on the go.

Joseph Gorski, Dipl. ’78, is founder and director of Soil Technologies, Inc., which tests and improves soil to increase yields and build disease resistance.

Laura Lee, DVM ’79, is still enjoying veterinary practice, and has been doing integrative medicine with a strong focus on animal chiropractic and sports medicine. She also focuses on traditional Chinese medicine, including acupuncture, herbal medicine and food therapy to treat chronic diseases and cancer in animals. She lives in Dartmouth, N.S., with her daughter who manages the veterinary practice, an Arabian mare and four cats. In her free time, she plays percussion in a Brazilian samba ensemble and improvised jazz groups.

Jim Murray, M.Sc. ’80, published his fourth book, Becoming … what you really want to be. He is the founder and CEO of Optimal Solutions International.

LeRoy Blake, B.Sc. ’82, and his wife Janet (Lilliman) Blake, B.Comm. ’83, mobilized their parish in Ottawa to sponsor a Syrian refugee family. The support was overwhelming, with contributions of more than $75,000, allowing the parish to sponsor two families. The Blakes report that one year later, the families are happy and well-adjusted, with the kids doing well in school, both fathers working and both families expecting babies this year, “a testament to them feeling safe and secure in their new homeland.”

Stewart Gill, PhD ’84, received an Order of Australia Medal in the Queen’s Birthday 2016 Honours list for contributions to tertiary education. He was recently appointed master of Queen’s College at the University of Melbourne and is the incoming president of the International Council for Canadian Studies.

Lori McLellan, BA ’85, retired at 54. She says: “Time to golf and fish and drink wine in Niagara! Still dancing after all these years!”

Alyda (Alice) Faber, BA ’87, published her first poetry collection, Dust or Fire (Goose Lane Editions 2016) – Johnston Green appears in one of the poems — and teaches at the Atlantic School of Theology.

Helen Sharp, B.Sc. ’88, has been appointed professor and director of the School of Communication Sciences and Disorders at Pacific University in Forest Grove, Ore.

Thomas Dimitroff, BA ’90 led the Atlanta Falcons to the 2017 Super Bowl as the team’s general manager. The two-time NFL Executive of the Year joined the Falcons in 2008 after scouting roles with the New England Patriots. The Falcons lost 34-28 to the Patriots in overtime.

Becky Madill, B.A.Sc. ’95, enjoys living on the Bruce Peninsula with her husband and four daughters, and teaching at a local school.

Deek Gray, B.Comm. ’96, works as a detective constable in the elder abuse and fraud unit in Burlington, Ont. He recently celebrated his 12th wedding anniversary. He says: “Big hello to all the 1995/1996 HAFA co-op grads out there for our 20-plus years since graduation!”

Joel Aitken, B.Sc. (Agr.) ’10, M.Sc. ’14, is an organic inspector at Ecocert Canada in Guelph, and Katie Thomson Aitken, B.A.Sc. ’10, is a naturopathic doctor in Guelph who treats stress and anxiety.

Frances Botden, BA ’14, and Anthony Hanemaayer, B.Comm. ’15, met in their second year at U of G, even though their childhood homes were less than five kilometres apart. Their wedding in August 2016 brought together five decades of graduates. The couple lives in Oakville, Ont., where Frances works at the Burlington Public Library and Anthony is working as an analyst for the Royal Bank of Canada.

Steve Stasko, B.Sc. (Agr.) ’11, head grower for Orangeline Farms, received an Ontario Premier’s Award for Agri-Food Innovation Excellence for the farm’s SurpriZingly Sweet Strawberries, which are available year-round. The farm was one of the first to grow greenhouse strawberries in Ontario.

Maureen Beech, B.Comm. ’14, was married in May 2016 at the Basilica of Our Lady in Guelph. She and her husband also purchased a new home in the city.

Erica Pollard, BA ’16, says: “You never realize how much you will miss the University of Guelph until you move to a different province. The U of G will always be home to me!”