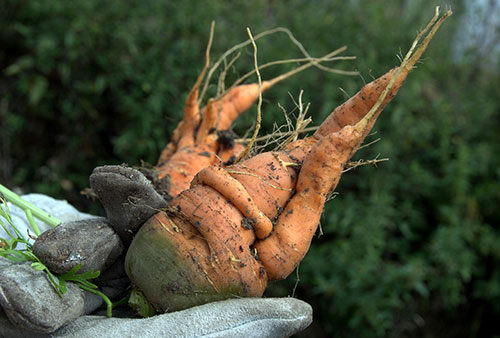 The next time you go grocery shopping, don’t turn up your nose to an asymmetrical apple or a forked carrot; they’re just as nutritious as more perfect-looking produce and they cost less.

Loblaw introduced “Naturally Imperfect” produce last year, offering up to a 30-per-cent discount to whet consumers’ appetites. The line has since expanded to offer more items, including peppers, onions and mushrooms.

Prof. Mike von Massow, Department of Food, Agricultural and Resource Economics, thinks it’s a great initiative. “We know that more than half of the food that is thrown out at the household level is fruits and vegetables.” Two-thirds of that waste is avoidable, he adds.

Imperfect produce usually doesn’t make it to grocery stores because of consumer perceptions that it’s lower quality. Instead, these fruits and vegetables are often sold at farmers’ markets, used in juices or thrown out.

Consumers have grown accustomed to perfect produce because that’s what grocery stores have traditionally offered. “It’s clear that it has to do with a disconnect between us and our food,” says geography professor Kate Parizeau, who studies food waste. “When we grew our own food it was easy to understand that this carrot next to the ugly one grew in the same conditions. There’s nothing wrong with it.”

Von Massow says food often gets wasted because it’s no longer suitable for its original purpose, but that doesn’t mean it can’t be used for something else. Overripe bananas, for example, can be used in banana bread or smoothies.

He also recommends keeping track of the food you already have so that you don’t buy the same items at the grocery store. And don’t throw something out just because it has reached or passed its “best before” date, which is only an indication of when the product has reached its peak, not when it has expired.

The researchers partnered with the City of Guelph and York Region to analyze food waste and develop strategies to minimize it. Composting food waste reduces its environmental impact, but it’s a costly service for cities to provide.

“I often tell people that if you’re throwing 20 per cent out, and you go buy five bags of groceries, you might as well leave one at the curb because it’s going to end up there anyway,” he says. “Why double the trip?” –SUSAN BUBAK

Is it true my dog doesn't like to be hugged?
Is it safe to eat foods past the 'best before' date?
My lawn is overrun with weeds – what can I do?
Professor Stephen Lewis on the scope and nature of self-injury