Until two years ago, Cameron Fryer’s experience with beer included a robust appreciation for the beverage and jobs that included almost every aspect of beer aside from actually making it. “I sold it, promoted it, served it, mopped it off of floors and delivered it,” says Fryer of his history with beer. “It just seemed like a natural thing to transition into making it professionally.”

Fryer, BA ’04, and Russell Bateman launched Royal City Brewing Co. in 2014, turning their passion for beer into a thriving Guelph-based business. “Russ and I started up the business because we really like beer, and we saw an opportunity in Guelph to come in and be a more local player,” says Fryer.

Starting their own brewery allowed them to be their own boss, but neither of them had much beer-making experience.

Fryer’s brewing knowledge was limited to a crash course on beer making he received while working an earlier job at Great Lakes Brewery in Toronto. After learning the basics from the head brewer, he began making beer at home. The learning process was “trial and error — mostly error,” says Fryer. Since then, he and Bateman have honed their beer-making skills into an art.

Royal City Brewing’s small scale and unique flavours set it apart from other breweries. When it opened, the brewery had just enough equipment to brew beer for its taproom and a handful of licensees. Since then, the brewery has expanded in size and capacity, and has made about 200 different types of craft beer. By next year, Royal City Brewing expects to be “one of the bigger small breweries in the province.”

Fryer studied history and German at U of G, but it was an elective beverage management course that piqued his interest in craft beer. Drinking his first Rauchbier, a German smoked beer, was a pivotal experience, introducing him to the diversity and flavours of different beers. “It’s now one of my favourite styles and has inspired a lot of our own brewing,” he says. 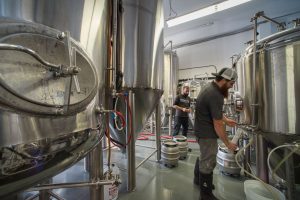 After graduating, he got a job teaching English at a high school in Nuremburg, Germany. “I actually landed in the beer heart of Germany,” says Fryer of the fortuitous post. Aside from teaching there for just over a year, Fryer spent time “learning about beer and tasting a lot of beer, and that furthered my interest in it.”

Fryer and Bateman grew up together in Aurora, Ont. They both attended U of G, but Bateman left before graduating to start his own business.

Royal City Brewing is brimming with Guelph pride (the city is also known as the Royal City). The walls of the taproom are lined with posters of their beer labels, which reference Guelph landmarks such as the covered bridge and Exhibition Park.

“When we first got going, we really wanted to be Guelph’s brewery,” says Fryer. “We wanted to share the enthusiasm and the love that we have for this place through what we’re doing beer-wise.”

Two-thirds of the brewery’s 15 staff are U of G graduates, including freelance graphic designer Cai Sepulis, BA ’02, who designs their retro labels and packaging. “We want to be Guelph’s brewery and she draws Guelph,” says Fryer. “She does some of the best labels and design work in the industry.”

The label for Gordon Hill Hefeweizen, for example, depicts a cyclist on the arduous Gordon Street hill. “I used to ride my bike up that hill every day,” says Fryer. He now lives in the Ward — a short walk from the brewery — which inspired their 100 Steps Stout.

Smoked Honey, Hibiscus Saison and Exhibition IPA are the brewery’s core brands, followed by its “Royal City regulars”: 100 Steps Stout, Suffolk St. Session Ale and Two Rivers Unfiltered Ale. Other beers such as Earl Grey Porter and Autumn Ale make seasonal appearances, while specialty blends such as Pear Vanilla, Octoberfest and Chocolate Raspberry are brewed once a year. Rotational brews and one-offs are also added into the mix.

Fryer and Bateman came up with the idea for Smoked Honey before they started the brewery. “That was the one recipe we knew we were going to go with,” says Fryer, describing it as a hybrid of his two favourite beer styles: an English brown ale and a German smoked lager. The flavour is created using beechwood smoke malt and local honey, which is fermented out for a light finish.

[pullquote]Craft beer is not determined by the size of the brewery, but by the way it makes its product,” says Royal City Brewing Co.’s Cameron Fryer. The main ingredient in a craft beer is grain, whereas macro brews typically use corn syrup, a cheaper alternative with a similar sugar profile that produces light-coloured, light-bodied beers.[/pullquote]

For Hibiscus Saison, Royal City Brewing works with The Custom Tea Company, which provides the hibiscus tea, and Escarpment Labs, which provides the yeast. Both companies are run by U of G grads, and received funding support from the Hub, an entrepreneurship program run by the University’s Centre for Business and Student Enterprise. “We just started it in May, and it’s been flying out the door,” says Fryer of the hibiscus brew. The tea infusion gives the beer a pink hue and a juicy tartness.

Fryer describes the current popularity of craft beers as a “reawakening” of beer tastes in Canada from the standard light lager. “I think people’s paletes are really adapting and changing now,” says Fryer, adding that his father is among the newly converted.

Much like a chef decides which flavours pair well together, Fryer and Bateman try to come up with flavour combinations that make good brews. “We’re just trying to imagine what goes well together and tastes well together, and how to get it in beer,” says Fryer.

Certain flavours come from the yeast itself, whereas other flavours are added at different stages. “You can affect the outcome of the flavour of the beer at every stage of the brewing process,” says Fryer.

He compares the beer-making process to making a cup of tea: just add hot water to grain instead of tea leaves. Mashing replaces steeping, where water is added to the grain and heated to extract the sugar. The resulting liquid goes into a kettle along with other flavouring agents. The starch is broken down into simple sugars such as glucose and maltose, which are easier for the yeast to digest, and then rinsed.

The sugars are boiled for pasteurization to eliminate any bacteria that can negatively affect flavour and to evaporate excess water. Hops represent the majority of flavouring agents and are added early or late in the brewing process. A heat exchanger rapidly cools the beer from 100 C to 20 C to kill any remaining bacteria. Fermentation takes about two weeks.

Despite the work perk of regular taste testing, working with beer all day has its downside. “My overall beer consumption has gone down quite a bit since we opened,” says Fryer, adding that brewing beer is hot and heavy work. “You’re covered in it and wearing it at the end of the day. You don’t always want to drink it when you get home.”

Unorthodox yeasts on the rise

Of all the ingredients in beer, yeast has the most impact on its flavour. The alcohol in beer is the by-product of yeast fermentation. As yeast feed on sugar, they produce alcohol and carbon dioxide. Different yeasts produce different flavours, depending on their genetics.

Those single-celled microorganisms are turning into big business for microbiology grads Nate Ferguson, B.Sc. ’12, and Richard Preiss, B.Sc. ’14, and graduate student Angus Ross. In 2015, they launched Escarpment Labs, which develops yeast strains for breweries across Canada.

Royal City Brewing has been a testing ground for many of their yeasts. “We’ve been working with them since day one,” says Preiss. “Before they even opened, they were the first brewery we approached with this idea of producing local yeast in Ontario. They were very supportive of that idea and they continue to be really supportive.”

Their research and development involves producing new flavours of beer using different combinations of yeast and trying them out on consumers. Escarpment Labs received a grant from Gryphon’s LAAIR (Leading to Accelerated Adoption of Innovative Research) program to work with Prof. George Van Der Merwe, Molecular and Cellular Biology, to study and commercialize Ontario wild yeast strains for craft beers.

Their fermentation facility is currently housed at Royal City Brewing, where they ferment test samples of yeast to see how they grow, taste and smell. They measure flavour compounds in U of G labs.

“We’re making these test beers, these experiments, inside a brewery, so it’s a saleable product,” says Preiss. Some of their specialties include saison and sour beers made with yeast blends that aren’t found in traditional beers. “They create a profile that no one yeast alone can create,” he adds. “They’re very yeast flavour-driven beers. It’s a really good showcase of what yeast can do in beer.”

Getting the beers out to consumers is as easy as selling them in the brewery. “I think it’s really great that we get so much support from the brewing community here,” says Preiss. “That’s really rewarding, being able to taste the end result that someone has created with our products.”

Beer and cheese have more in common than you might think, sharing a long history as farmhouse fermentation products. Certified beer expert Mallorie Edward, who teaches a beer seminar series at U of G, offers five beer and cheese pairings to please the palete.

Tim Lambert: Champion of the Humble Egg
U of G Has a "Supervillian" Grad
Shooting For The Stars
The Guardians
From Star Wars to the science of sleep, first-year seminars offer a unique learning experience for s...