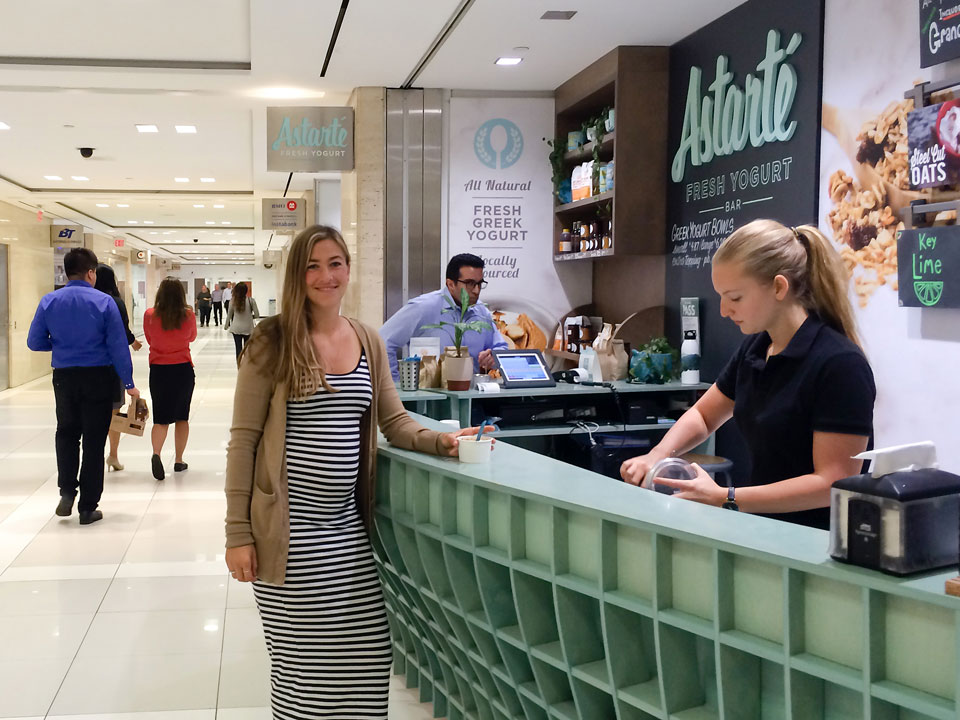 Greek yogurt is a blank canvas for Emily Wight. The former Gryphon varsity basketball player was travelling in Australia and New Zealand when she fell in love with the luxurious product that tasted delicious with any fresh topping.

“Everything was geared towards getting yogurt,” says Wight, B.Comm. ’07, of the trip with her now husband. “I cried my last day because we couldn’t get any.”

Her new love of Greek yogurt gave Wight the idea to open a similar business in Toronto. With high storefront rents and a specialized menu, finding a location was the first hurdle. She needed foot traffic, and after many walks along the PATH, a 30-kilometre pedestrian walkway beneath the Financial District, Wight saw the potential of going underground. In 2013, she launched Astarté Fresh Yogurt Bar — the first of its kind in Canada — under King Street West.

“It’s the perfect spot for my business,” Wight says of the PATH, which is used by 200,000 people daily. “I’m more morning focused. To get people comfortable with my concept, I had to be in front of them early and thinking of yogurt.”

Wight’s quick grab-and-go yogurt bowls have hit a mark with her largely corporate clientele who are rushing to work and need a quick, healthy breakfast. “I’ve converted tons of people into yogurt believers,” she says.

Wight, 30, says she’s an “outdoorsy” person, so the idea of working underground was an adjustment. And the venture was risky — she quit her corporate job as a national account manager to start her business.

Astarté now serves about 160 customers a day, offering up flavourful yogurt parfaits such as key lime, blueberry lavender, peanut butter and strawberry balsamic, and seasonal options like maple pumpkin. She sources the Greek yogurt from Shepherd Gourmet Dairy in St. Marys, Ont., and makes her own granola and preserves.

“I’m feeling reflective approaching my three-year anniversary,” says Wight, who is expecting her second child. “I’ve walked the PATH and have seen a lot of places that have gone out of business. I’m proud I stuck it out.”–DAVID DICENZO

James Carnevale’s “food truck” isn’t really a truck at all. He scoots around Toronto and serves delicious handmade frozen treats from a tiny, three-wheeled Piaggio Ape (pronounced “ah-pay”). Bar Ape is the city’s first mobile gelato shop, and although it’s only 40 square feet in size, it’s made a big mark on the city’s food scene — Carnevale’s lemon gelato bar was named one of the best frozen treats on a stick by Taste Toronto.

“I worked on it constantly and customized it,” says Carnevale of the blue 1982 Ape, which he worked on for four years before taking it to the streets in 2014.

The Ape’s size presented a few challenges: it’s actually classified as a motorcycle, so getting a permit was difficult, and because there’s no room to prepare classic gelato, Carnevale had to get creative — he decided to make the gelato in advance and form it into quick-serve bars. The vehicle’s battery-powered freezer holds a few hundred of the hand-moulded, chocolate-dipped creations, which come in unique flavours such as saffron, pistachio and chocolate hazelnut.

With the crowds clamouring for his gelato, Carnevale, who completed U of G’s ice cream technology short course and honed his skills in popular Toronto gelato shops, recently opened a walk-up storefront.

“I’ve always liked it and I always made it at home,” he says of gelato. “I knew it was something I always wanted to do.”–DAVID DICENZO