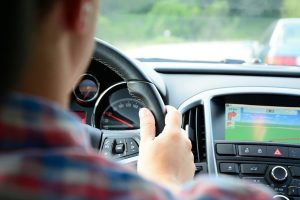 Psychology professor Lana Trick hasn’t driven since grad school. But the prospect of saving lives, and preventing injury and costly damage on the roads, will fuel her studies of motorists’ behaviour and performance with a new state-of-the-art driving simulator at the University of Guelph.

A cross-campus research team of psychologists, computer scientists and engineers will inaugurate the new driving simulator, considered unrivalled by any other university in Canada.

Equipped with a new simulator vehicle and motion capture system, the DRIVE Lab (Driving Research in Virtual Environments) is intended to help strengthen U of G’s leading research role in road and motorist safety.

Not only are vehicle crashes a leading cause of injury and death, but they also cost taxpayers billions of dollars every year in health and social welfare expenses, says Trick.

The simulator includes viewing screens that project a wraparound, virtual-reality driving environment. Linking to the Google mapping function will allow the screens to project real-live scenarios, such as driving around downtown Guelph.

It also includes a motion-capture system of cameras for observing subjects’ activities, including their use of in-vehicle devices and equipment.

The DRIVE Lab allows researchers to challenge subjects with road hazards, from inattentive pedestrians and poor weather and visibility, to heavy traffic and reckless behaviour by other motorists.

It also permits the team to gauge in-car distractions such as GPS systems, passengers and even the driver’s emotional state. Research suggests three out of four crashes involve lack of attention, says Trick. –ANDREW VOWLES