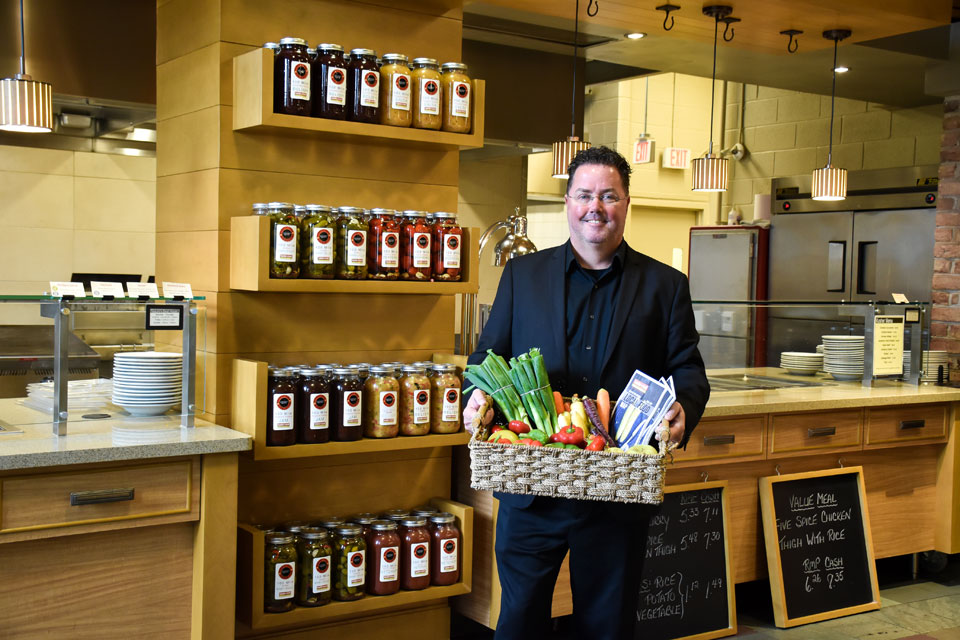 If you order a burger at the popular 100 Mile Grille food outlet in the University of Guelph’s Creelman dining hall, Mark Kenny can tell you exactly where all its parts come from: the meat is procured from local farmers and formed into patties at the University’s own meat processing facility; seasonal tomatoes and onions are grown nearby; the buns are made by a local artisan baker; and even the condiments, including spicy ketchup, mustard and barbecue sauce, are made from scratch with local ingredients. To sweeten your accompanying tea or coffee, there’s honey from the campus apiary.

“Good food is a lot of work, but it’s very rewarding,” says Kenny, procurement manager for Hospitality Services and a certified supply chain management professional (CSCMP). “It’s worth it when we see the faces of the students as they taste what our chefs have made.”

Kenny’s job is to source the raw goods to feed more than 20,000 staff, faculty and students in 17 outlets across campus, as well as specialty foods for catering events on campus. U of G’s Hospitality Services is one of only three independent food service departments at a Canadian university that directly employs a staff member with CSCMP accreditation to purchase food and manage contracts; many other institutions use outside catering companies to feed students.

U of G further sets itself apart by serving foods that are grown and processed on campus. Arctic char, for example, comes from the Alma Aquaculture Research Station, and more than 1,800 kilograms of honey produced at the Honey Bee Research Centre is served every year.

Veggies that can’t be used right away are processed on campus, vacuum-sealed and frozen for use over the winter, and a commercial-grade smoker adds flavour to mushrooms, ribs and chicken.

Kenny’s commitment to procuring locally means he knows many of the 75 nearby farmers who supply food to the University on a first-name basis. When he deals with larger distributors, he requests Ontario-grown foods whenever possible.

“I like to share the stories of the food we are serving, and that means sharing the stories of the people who produce that food,” says Kenny, who is active on Twitter (@100milemark) and often posts mouth-watering photos of the day’s specials.

Kenny balances his love of food with a solid business background and an artist’s sensibility. He started working in restaurants at 14 and went on to earn a business diploma. He enrolled at U of G as a mature student and took courses ranging from film studies to art history, but before he could graduate, the food world lured him back.

“The students here [at U of G] are educated about food,” he says. “They’ve travelled; they’re used to foods that would have been considered exotic not long ago.”

Kenny taps into the diversity of the chefs on campus to respond to that desire for variety. “We have chefs from 15 different cultural backgrounds here, so they can bring those flavours to our meals,” he says. A popular dish on campus is fish moilee with Indian spices served at InFusion, a pan-Asian cuisine kiosk in the University Centre.

Surprisingly, pickles have been one of the tougher foods to source locally. Kenny searched for months before discovering Lakeside Packers in Harrow, Ont. “Now we buy them by the skid.” He also started ordering cheese from Bright Cheese and Butter in Woodstock.

The only downfall to serving such great food is students don’t want to leave. One student leaving campus told Kenny, “I don’t know what I’m going to eat now — I’m so used to the great food here.”
–TERESA PITMAN

A quick bite of the menu served by Hospitality Services to 5,000 students on move-in day in September:

Tackling concussions, head-on
This I know: how a tattoo can heal
This I know: how to teach your baby sign language
How to make peace with the trillions of microorganisms that inhabit your body