Evan Fraser has a plan to fix our fragile food system 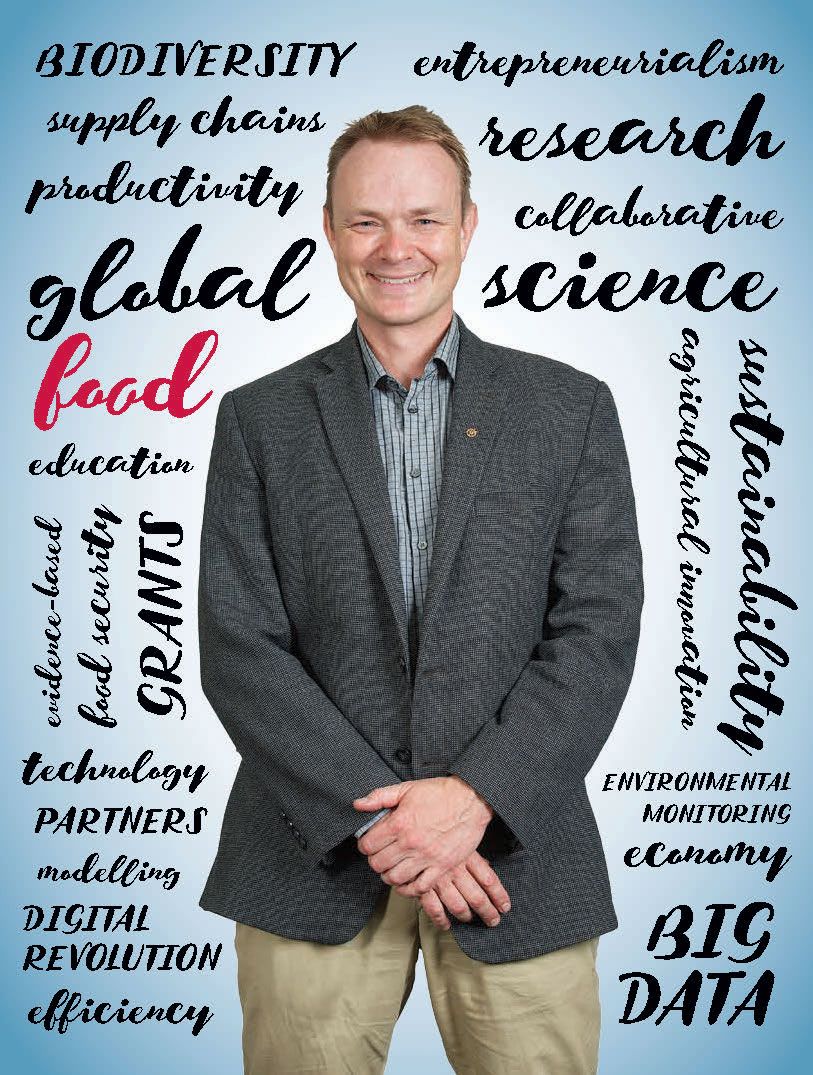 Evan Fraser’s career epiphany came one afternoon in the early 1990s while he was weeding a strawberry patch. That day, during a summer spent working on his grandfather’s fruit farm near Welland, Ont., Fraser was thinking about next steps beyond his university anthropology studies, including the possibility of taking over the farm. Then his step-grandmother drove up in her air-conditioned Lincoln Town Car and lowered the window to say hi.

Until her 50s, Kay Fraser had stayed at home to run the farm along with Evan’s grandfather, Frank, a graduate of the University of Guelph’s Ontario Agricultural College. Feeling restive, she decided to take the advice of one of her sons to become a stockbroker. “That unleashed a formidable force,” says Fraser. Starting with a few well-off acquaintances, Kay built a clientele and a new lifestyle for herself. “She almost certainly earned more in commissions that afternoon than I made all summer on the farm,” says Fraser, laughing in his Hutt Building office, which displays black and white family photos on the farm. “Not only that, her commission was paying my wage.”

Instead of farming, he opted for grad school — better to write and talk about farming, he thought. “I’ve got food in my genes, both from a consumer and a producer perspective,” says Fraser, whose father is an animal welfare scientist and mother is a U of G graduate who has run a bed and breakfast.

That decision ultimately landed Fraser at U of G in 2010 to take up a new Canada Research Chair in Global Human Security. Geography professor John Smithers was department chair when Fraser arrived. Sporting a neck scarf and looking “like a cross between the Tasmanian Devil and Grover on Sesame Street,” says Smithers, the new guy “blew into the building with a bundle of energy and enthusiasm.”

Today Fraser is a bit more measured, but only just. Wearing a heavy checked shirt, jeans and running shoes, Fraser, a youthful-looking 43, might be taken for one of his own grad students, with all the energy of a twenty-something. “He’s very enthusiastic and optimistic,” says Dave Hobson, a technology transfer manager in U of G’s Catalyst Centre and Fraser’s weekly jogging buddy. “He’s not motivated by material things and money. We had a meeting two days ago with three people in suits, and Evan shows up in a T-shirt and khaki green slacks.”

In public talks about our collective food future, Fraser paces the stage and delivers his points with the impassioned cadences of an evangelical TED talker. He lays out his view of the food crisis in a crisp, punchy style whose folksy language doesn’t detract from the seriousness of his message. “There is a mismatch between what we produce and what we know we should be producing, and if we are to nutritiously feed the future, there needs to be a realignment in terms of the world’s agricultural systems,” he tells the audience at this fall’s annual president’s dinner.

Says Smithers, “He really does have an appreciation that food is a basic human need that we can’t take for granted. The things he’s interested in are part of the campus DNA — not just food but justice and development elements. Justice and equity map onto the food legacy.”

That message reflects what Fraser has learned since that day in the strawberry patch. He studied anthropology at the University of Toronto (U of T) before completing grad degrees in forestry and environmental studies at U of T and the University of British Columbia. After his PhD in 2002, he worked in a policy institute with former MP Lloyd Axworthy. A year later, he headed to the United Kingdom for a position at the University of Leeds, which was launching a new school of sustainability. 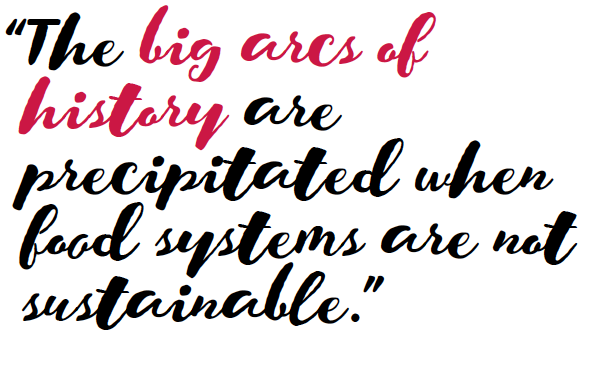 By the time he returned to Canada, Fraser had published numerous academic papers and book chapters. He’d also begun attracting mainstream attention for his more popular writing. He arrived in Guelph in the midst of media interviews about his new book, co-authored with journalist Andrew Rimas, called Empires of Food: Feast, Famine and the Rise and Fall of Civilizations. The book explores how mismanaged agro-ecosystems have contributed to hunger and other issues that led to unrest and conflict in parts of the world, including the 1930s American dust bowl and the Irish potato famine.

That lesson has repeated itself more recently, says Fraser. The 1990s Rwandan genocide was preceded by periods of drought or environmental degradation that spurred migration into already crowded urban areas. Similarly, he says, a drought in Russia cut off Kremlin wheat exports to the Middle East in 2010, which helped spark the 2011 Arab Spring. “Some of the big arcs of history are precipitated when food systems are not sustainable,” he says, adding that population growth and climate change often expose other political and economic problems, making civic unrest and international conflict much more likely.

At U of G, he set about developing a food security research, teaching and outreach program to address what he says is one of the world’s greatest challenges: how to sustainably and equitably feed the projected human population on Earth by mid-century. The Feeding Nine Billion project is intended to provide sound information on food systems and food security.

Kelly Hodgins, MA ’15, is project coordinator of Feeding Nine Billion. She came to U of G in 2013 to study the role of businesses in food security and was taken by Fraser’s friendly demeanour — a first impression that was only strengthened when he invited his grad students for Thanksgiving at his home. “This food prof is actually cooking food and bringing people together around food,” she recalls. “He’s walking the walk.” Other grad students have looked at food waste, local and global food systems, climate change and urban migration, and urban agriculture. Fraser says he likes to mentor students with activist leanings and prefers not to micromanage, calling his supervisory style “benign neglect.”

Two years ago, Fraser and Hodgins launched the Feeding Nine Billion challenge, a two-day contest that sees student teams from a handful of universities designing ideas for improving food security. This year’s event held in early September brought together more than 40 University of Guelph undergrads from across campus. Feeding Nine Billion has teamed up with U of G’s transdisciplinary “Ideas Congress” course run by Profs. Dan Gillis, School of Computer Science, and Shoshanah Jacobs, Department of Integrative Biology. The class is intended to help students develop their food security ideas, and to connect them with related initiatives both on and off campus. “The idea is to impart skills and confidence for students to make a difference in the world,” says Hodgins. “We’re engaging students in social innovation.”

Widening their audience, the Feeding Nine Billion team has made an animated YouTube series on the global food crisis, which has been viewed more than 280,000 times, and has been used as a teaching aid in university and high school classrooms. Fraser continues to write extensively about food in articles that have appeared in The Globe and Mail, The Guardian, The Walrus, Foreign Affairs and CNN. In 2014, he published a graphic novel, called #Foodcrisis, whose imaginary apocalyptic narrative shares Fraser’s five-part prescription for staving off a global food disaster: improved food distribution, sustainable higher farm production, support of local food, environmental protection and public engagement. 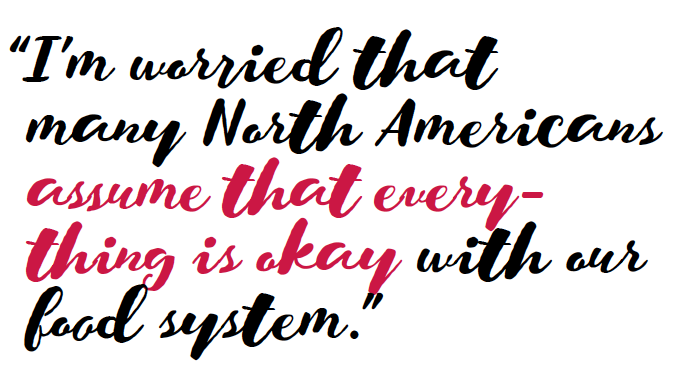 Fraser says food security is an intergenerational issue — one whose solution will lie largely with today’s younger audience, including his three children ages 6, 11 and 13. It’s tomorrow’s producers and consumers that he has in mind when publishing a graphic novel or airing those YouTube videos. “I’m worried that many North Americans assume that everything is okay with our food system,” he says. “The food crisis of 2008 to 2011 suggests otherwise.”

This summer, Fraser was named director of the University of Guelph Food Institute, a portal that connects Guelph food researchers with Canadian and international partners to improve food systems, and to raise Canada’s profile in the global food economy. Earlier this fall, he took on another challenge when he became scientific director of a seven-year, $77-million project called Food From Thought (FFT), involving more than 100 U of G researchers and many more partners in Canada and abroad. Fraser says Food From Thought is a huge boost for team members and the entire campus of what’s billed as Canada’s food university. “This has created opportunities to do big things,” says Fraser. “There’s huge momentum.”

It’s perfect fodder for someone described by friends and coworkers as a big-picture thinker and an investigator driven as much by curiosity as by conviction. He’s accompanied U of G ecologists Kevin McCann and Neil Rooney to Cambodia to look at small-scale fishing and farming, and he spent 10 days with population medicine professor Cate Dewey, “bouncing around in the back of a beat-up Land Rover in rural Rwanda” to see rice-growing projects run by the World Bank and small-scale farming by HIV-positive women in remote mountain villages.

Those experiences — and their lessons about the social nuances of sustainable production — play into Fraser’s own research studies of the social and environmental effects of food price volatility and ways to reduce waste in global food systems. We need 21st century technology to solve this century’s challenges, says Fraser, but we need to be mindful of potential consequences. Those technologies could accelerate the decline of rural communities and leave farmers disenfranchised, both here and abroad. “What does a self-driving, GPS-guided tractor do for a farmer in Malawi?” asks Fraser, who also plans to study data ownership and privacy issues in agri-food systems along with U of G engineers and computer scientists.

Fraser figures he’s making change in wider ways than he could have done back on his grandfather’s fruit farm. It’s his global view on food security that in turn lures tomorrow’s potential change-makers to work with him. Referring to his grad students, he says young researchers are equally drawn to U of G by its combination of rigorous academics and a chance to contribute to real-world change.

“We have to strive to explore the full complexity of these issues,” says Fraser. “There’s no simple populist answer about food and sustainability. I’m determined to try to explore these issues in a way that’s accessible and relevant.”

A pandemic year in HIGHLIGHTS
U of G Grad Cycles, Swims, Runs the Distance in World Triathlons
Lessons From Past Pandemics
Art in the Public Eye
U of G Grad Heads Project to Improve Workplaces for Women in Skilled Trades