Bruce Hunter, Dipl. ’62, invites OAC class of 1962 members to a 55th reunion during next year’s Alumni Weekend on June 9 and 10, 2017. There will be a class gathering and a dinner banquet at PJ’s Restaurant. 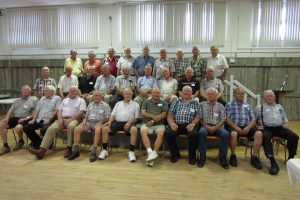 The OAC class of ’62A recently celebrated its 54th reunion. 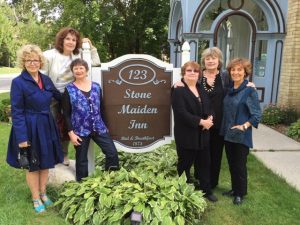 (l-r) Karen Kirkland, Julie (Petch) Goldhawk, Karen (Hawrychuk) Myers, Patricia Jamieson, Melissa Dean and Gale (Frizzell) Repta have been getting together for an annual “Guelph Girls” reunion since 2003. They met in 1966 at Wellington College (now the College of Arts). Says Myers, who lives in Eugene, Ore.: “When I fly in every summer, the magic happens all over again and we pick up where we left off last year. But this year is special, marking our 50th anniversary of friendship full of wicked laughter, joy and outrageous fun.”

John Gordon, BA ’76, was inducted into the Ontario Golf Hall of Fame. He has worked as a reporter and editor, and in golf communications for 30 years, and has also authored eight books about golf. Along with a family friend he created the annual Mikey’s Tournament for Autism, which has raised more than $300,000 to support a resource centre for families and children affected by autism.

Robb McQueen, B.Sc. ’83, retired as head of guidance at Aldershot School in Burlington, Ont., at the end of June 2016. He and his wife, Sharon, moved to Nova Scotia to enjoy retired life.

Janet Cooper-Webb, BA ’87, is the chef-owner of Orchard House Gourmet, a chef and catering service in Guelph. She also teaches at a culinary college and is a food safety trainer. She says her job is “allowing me to share my experience and love of healthy, local food — I love my work!”

Patrick Dowds, BA ’88, has been an elementary school teacher with the Halton Catholic District School Board for 27 years and recently moved with his family to his hometown of Milton, Ont. He says: “We enjoy visiting the U of G campus at least once a year. It’s so awesome to see how much it has grown since I graduated. Guelph has always had one of the prettiest campuses in Canada.”

Guy Gilron, B.Sc. ’84, M.Sc. ’88, recently completed the directors education program jointly developed by the Institute of Corporate Directors and the University of Toronto’s Rotman School of Management, and received his ICD.D designation, indicating a commitment to excellence in the boardroom. He is a senior environmental scientist and principal at Borealis Environmental Consulting, serves as a board member for the Canadian Ecotoxicity Workshop and is an editorial board member for an international journal.

Patrick Lawrence, M.Sc. ’91, has been appointed associate dean (social and behavioural sciences) in the College of Arts and Letters at the University of Toledo, Ohio.

Kristen Wallace, BA ’08, got married in February 2016 and completed her master’s degree in higher education and leadership at the Ontario Institute for Studies in Education at the University of Toronto.

Jesse Kirshenbaum, B.Comm. ’10, is co-founder of Bardown Sports, Inc., which creates hockey apparel that is sold in more than 300 stores across North America and Europe. The company also produces apparel for almost every university in Canada, including clothing for the U of G Gryphons.

Kevin Sukhu, M.Sc. ’10, and Sarah Law, B.Sc. ’14, received an award on behalf of their compressed time frame nursing class at a Western University award ceremony. The class won for exemplifying qualities and leadership skills critical to the field of nursing.

Stuart Cameron, BA ’16, is enrolled in the University of Toronto’s master of social work program.