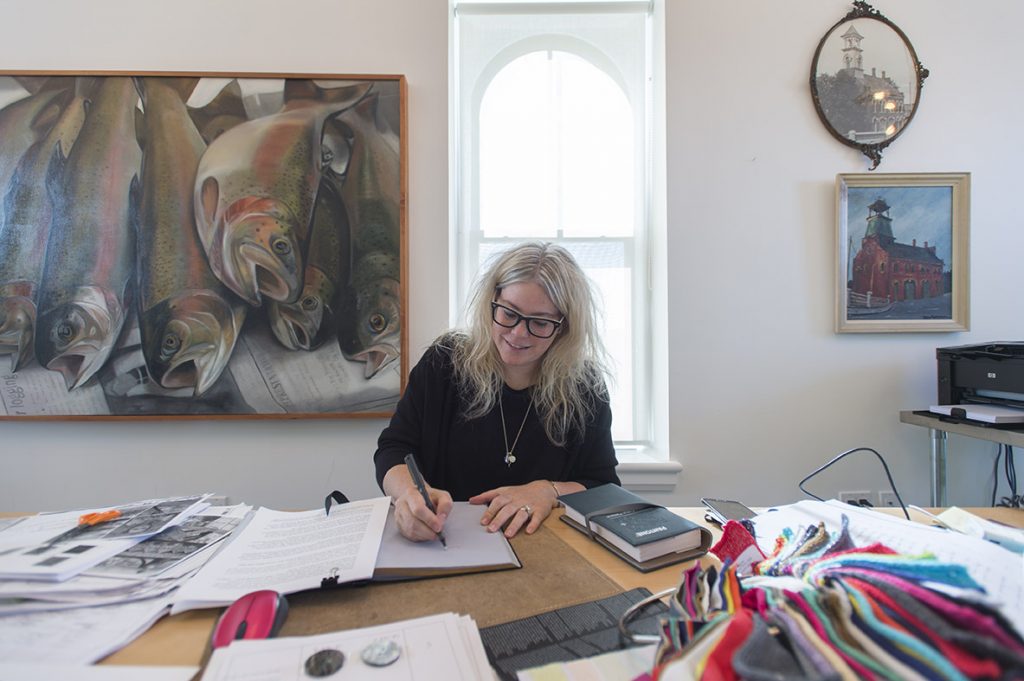 You won’t find any stamps or envelopes in the old post office building  in Thorold, Ont., but you will find unique clothing and accessories made locally and around the world. Clothing and textile designer Shannon Passero and her husband, Michael, transformed the former government building into a niche boutique called The Post Office. The store caters to socially-conscious consumers who care about what they buy, where it comes from and the people who made it.

The store features a colourful assortment of products, from hand- stamped pewter jewelry made by an artisan in Thailand to preserves from Niagara-on-the-Lake. Along with a team of buyers, Passero handpicks all of the merchandise — more than 20,000 items from 200 vendors—and every item has a story. “We know where everything’s coming from and the accountability of it, which is refreshing,” she says. She also wants her customers to have a memorable shopping experience, from the moment they walk through the door and smell the handmade soaps to when they make their purchase. When was the last time your receipt came in a small hand-beaded purse?

“It all works together in this amazing little spot,” says Passero, 43. “The way retail is going is that people want a great experience. The whole ‘shop local’ thing is great, but people want to have good value, they want to have friendly service and different products. It’s a simple equation, but it’s very difficult to get.”

Passero, BFA ’95, is a veteran of the fashion world, getting her start in 1998 when she co-founded and designed her first clothing line, Pure Handknit Designs, a collection of hand-knit sweaters with distinctively crafted buttons. In 2006 she launched Neon Buddha, a lifestyle clothing collection. Today, she designs clothing for both multimillion-dollar brands under the umbrella Shannon Passero Designs.

High-end retailers such as Bloomingdales, Nordstrom and Neiman Marcus carry Passero’s designs, along with more than 2,500 specialty stores in North America, Europe and Australia.

Originally from Welland, Ont., Passero and her husband decided to put down roots and open a bricks and mortar store in Thorold to be close to their families.

In 2013, Passero opened her first retail location in the Old Firehall (also named after its former life) down the street from The Post Office and now uses it as a design studio. Her style inspiration comes from being a working mom — all of her clothes are wash and wear.

When the store outgrew the 800-square-foot fire hall, she moved into the 6,500-square-foot post office in August 2015. Both heritage buildings underwent extensive renovations to bring them up to modern building standards while preserving their historical character. “The community at large felt that this project was so important to Thorold and Niagara as a whole,” says Passero. 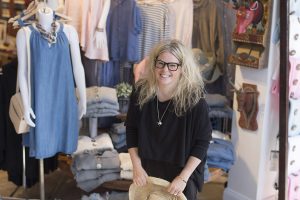 Every item in the store reflects a commitment to sustainable production and respect for the workers who made it. Much of the knitwear is handmade in Thailand. The coconut-shell buttons are one of Passero’s trademarks. “That was a way of differentiating ourselves in the market,” says Passero, who is wearing a dress and tights from The Post Office and several necklaces from the store, two of which bear “E” and “V” pendants — the initials of her two daughters, Elizabeth, 2, and Victoria, 4.

In the wake of the 2013 garment factory collapse that claimed the lives of more than 1,100 workers in Bangladesh, Pure Handknit and Neon Buddha have set themselves apart from other clothing lines. More than 6,000 people in Thailand have worked for Passero’s collections over the past 18 years, all of them receiving a living wage, paid health care, including a maternity leave that’s twice as long as the state standard, a daily hot meal, and English and Thai classes. Some of them have graduated with master’s degrees; others have become the first generation in their families to send their children to university. A large number of her managers are female, a rarity in the clothing industry, she says.

She admits it’s not easy to provide these benefits to her workers but that her time in Guelph, both as a student and as a resident for 10 years after graduation, influenced her mindset. She also praises consumers for becoming more aware of where their purchases come from and how they’re made.

Starting a business with a foreign supplier posed unique challenges, including cultural and language differences. Although most of her contacts in Thailand speak English, she finds they’re reluctant to be critical. “In Southeast Asia, they don’t like to use the word ‘bad,’” says Passero, so she asks if a product is “good or not so good.”

Passero recently received an honorary degree from Niagara College and was invited to speak at the school’s 2016 convocation. Among her advice to graduands were to have “respect for others” and “be gentle to the Earth,” which are the cornerstones of her business.

She credits her own education at U of G for instilling an appreciation for sustainability. “Guelph empowered us to feel like we could change things — that always stuck with me. There’s a right way to do business and that’s always stuck with me as well.”

She attributes much of her success to “not a lot of strategy, but a lot of luck.” Her entrepreneurism started in high school, when she sold her own handmade creations at craft shows – she sold greeting cards at the Guelph Farmers’ Market. Working for retail clothing stores pointed her towards a career in fashion.

With the goal of helping other women entrepreneurs succeed, she launched the Shannon Passero Women in Business Grant in 2013. Two grants valued at $12,500 each are awarded annually to female entrepreneurs in Ontario who have been in business for at least three years and follow Passero’s tenets of producing goods ethically and sustainably. “I’m amazed there’s so much talent in Ontario, especially here in Niagara,” she says, adding The Post Office carries many of the winners’ products.

Passero says even after more than two decades in business she’s still learning. She wishes she’d had a mentor when she was starting out and now dedicates a few hours every Friday to mentoring others. “The need for women to mentor other women in business — we have to do it.” 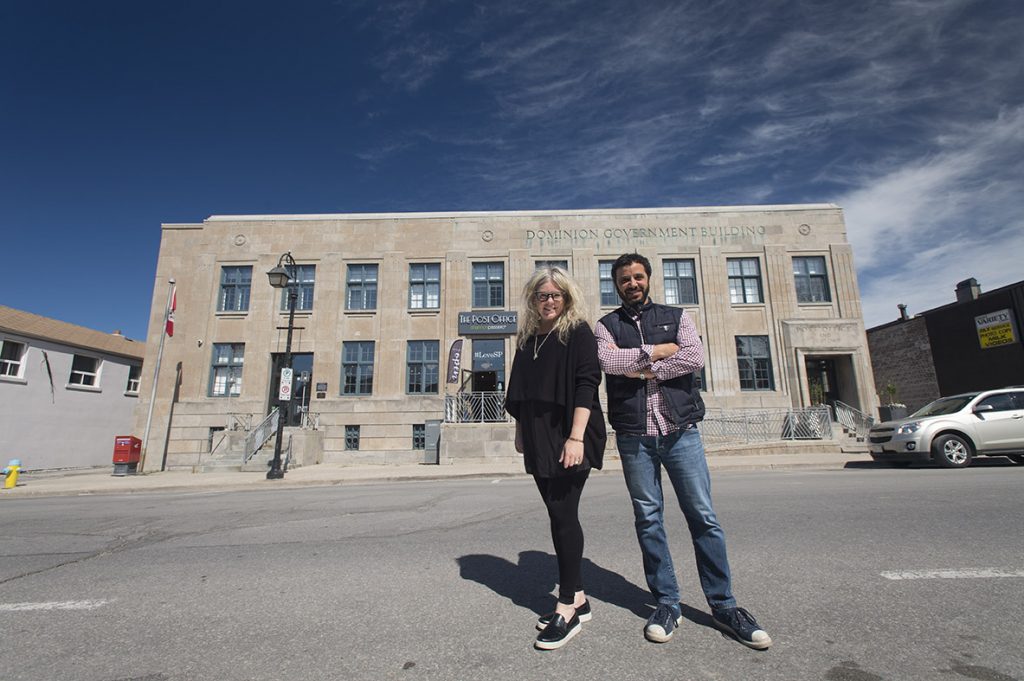 Bringing heritage buildings back to life

The old fire hall and post office in Thorold, Ont., could have stood empty and in disrepair if it wasn’t for the vision of local residents Shannon and Michael Passero, who saw retail potential in both buildings.

Under the Ontario Heritage Act, any renovations to a heritage building must be in keeping with its time period. Preserving a building’s historical character while improving its energy efficiency is costly and time-consuming, but that didn’t deter the couple. Michael’s expertise in designing energy-efficient homes combined with Shannon’s eye for design helped Thorold reclaim part of its historical identity.

Once used to hang fire hoses to dry, the fire hall’s bell tower is one of its most distinguishing features. In strong winds, the tower would sway, so the couple hired a structural engineer to reinforce it with internal bracing that was invisible from the outside. Layers of paint were removed from the window frames to reveal their original black colour, which was matched when they were repainted. Set against the red brick walls, the black window frames create a “striking contrast,” says Michael.

Built in 1935, the post office is clad in Queenston limestone. “It’s such a beautiful stone,” he says, and after a thorough cleaning, “the spark from the stone is back.” The stone capping on the roof was painstakingly recreated using casts of the originals. Instead of replacing the windows, the couple had them reglazed and repaired. Each window was then inspected for historical integrity and energy efficiency. The elevator, with its top- and bottom-closing doors, was restored and is now used to move inventory. The vault in the basement had to be unlocked by a locksmith. “It took the locksmith two days to open it,” says Michael.

The restoration of the post office received a Niagara Community Design award and was featured in Heritage magazine.