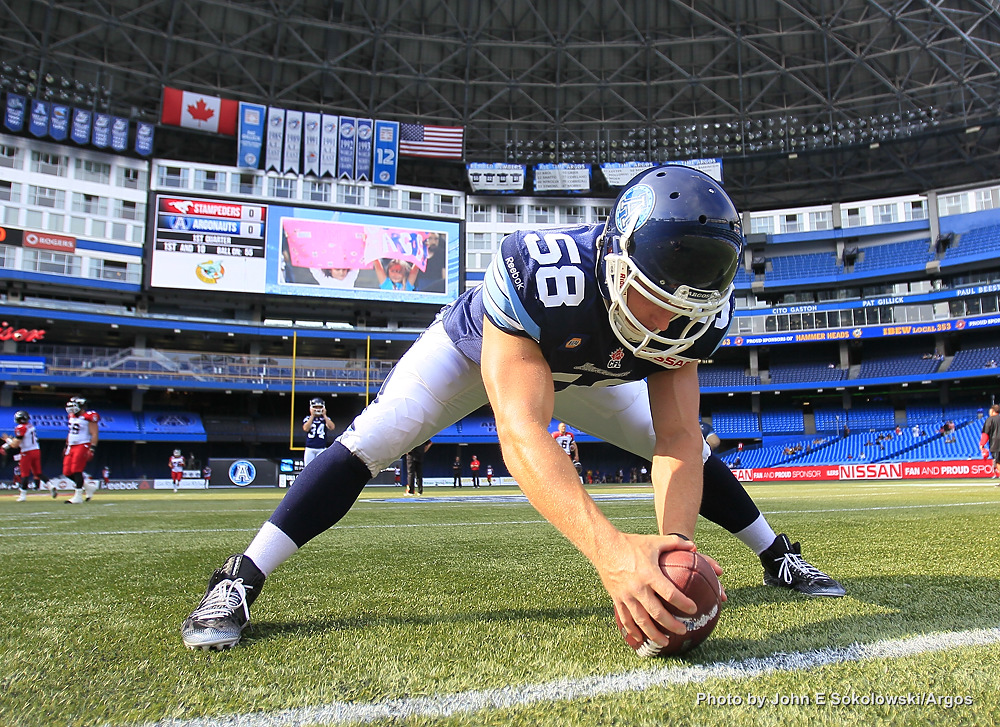 Guelph’s Jake Reinhart has the muscular frame of a construction worker or a pro athlete.

He’s actually both, playing in the Canadian Football League (CFL) from June to November and doing home renovation work in the off-season.

At six feet tall and 225 pounds, the third year Toronto Argonaut has thick arms and wrists, which make him one of the CFL’s best long snappers.

With his sunglasses perched atop his head, holding back his golden-brown hair, the 26-year-old has the look of a surfer, complete with glistening smile and easygoing charm.

But looks are deceiving. Surfers don’t heed the clock or routine. For Reinhart, life on the field and even at home is all about clockwork routine and simple rhythms.

As a long snapper, Reinhart spends hours perfecting the timing of snapping the ball back 15 yards to an exact point on the punter’s right hip, and seven yards back to the field-goal kicker with exactly 2.5 revolutions.

At home, life takes on a familiar rhythm, too. He and his two brothers, Job, 21, and Will, 24, live at home with parents, John and Ellen. When they aren’t with the girlfriends, the brothers are hopping on mountains bikes and riding the trails near their home.

John raised his family on the same street where he grew up in Guelph and the university has been the centre of the family’s life for decades.

John, 57, earned a horticulture diploma in 1985, and is U of G’s grounds department manager. He’s been working at the school for close to 40 years.

Jake graduated from the geography program in 2013, while Job is coming off a rookie-of-the-year campaign with the Gryphons.

Too light to be a regular centre, Jake is happy to be a specialist, even if there’s little glory in the job. But he’s doing his part to make the position cool.

In a series of popular CFL videos, Reinhart has performed a variety of “trick snaps,” including clanking the ball off the uprights from long range and snapping the ball through a small opening of a passing tractor into the arms of a receiver.

Jake and Job have followed similar paths on the field, both playing quarterback in high school before switching to linebacker in university.

In Jake’s third year at Guelph, defensive line coach Brian Cluff encouraged him to specialize as a long snapper. “He said I’d been a quarterback, so I’d be doing the same thing, only throwing it between my legs,” Reinhart recalls.

Reinhart catches the Gryphons games when he can. “He had a great first year,” he says of his brother’s team, which advanced to the Mitchell Bowl after a 7-1 regular-season record. “He’s definitely getting noticed. He’s really strong and fast.”

But brotherly love sometimes takes a back seat to sibling rivalry. “My brother is probably five pounds heavier, but I’m stronger and faster,” Reinhart says with a big laugh. “That’s what I tell him anyway.”

On the job: Making science fun for everyone
On the job: taking the reins as one of Canada's top athletes
On the job: an office on the water
On the job: Allison Day takes her kitchen online