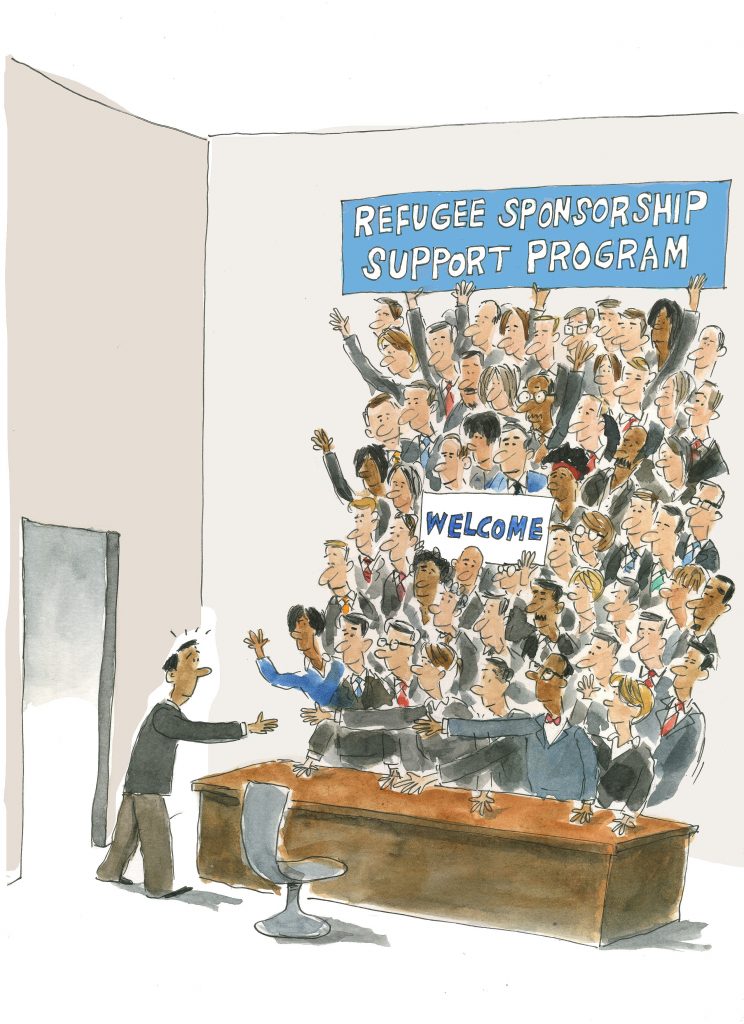 As an immigration and refugee lawyer in Toronto, Jackie Swaisland has encountered her share of horror stories about the ordeals of migrants. Still, when news outlets broadcast images last fall of three-year-old Alan Kurdi, who drowned in the Mediterranean Sea, the Syrian refugee crisis took on added poignancy. Swaisland had just returned to work from her first maternity leave. “Like parents all across the world, I thought: ‘What if that had been my daughter?,’” she says. “It struck really close to home.” She felt driven to act.

She’s one of many U of G graduates who are helping refugees or internally displaced people, now numbering in the tens of millions worldwide. The United Nations High Commissioner for Refugees says those numbers have reached their highest point since the Second World War, driven by recent conflicts in Syria and Iraq.

Ripples from the Middle East have reached other parts of the globe, notably Europe, where Edward Koning grew up in the Netherlands. The U of G political science professor — and, as of last year, a permanent Canadian resident — says Canada’s geographical distance allows us to be more selective of prospective migrants than many European countries facing floods of people spilling over their borders. He says we could be doing more.

“The story of Canada as the most generous place for refugees is a little self-congratulatory,” says Koning, who is studying immigration policy in Europe and North America. Referring more generally to the country’s careful selection process for admitting immigrants, he says Canada tends to accept applicants based on their potential for finding work. Government-assisted refugees to Canada, who are registered as refugees with the United Nations, receive public assistance for at least a year.

Still, there’s no denying the refugee crisis has touched a humanitarian chord in many Canadians, including Swaisland.

Stunned by those TV images last fall, she launched the Refugee Sponsorship Support Program (RSSP). Taking time off from her work at Toronto law firm Waldman and Associates, Swaisland, BA ’03, worked with University of Ottawa law professor Jennifer Bond to enlist practitioners across Canada for this new venture.

Under the network, legal experts offer pro bono services to groups and individuals looking to privately sponsor refugees to Canada. Within days, they received more than 100 responses. Today, the network involves 1,300 lawyers and law students in 11 major centres. The RSSP trains lawyers in refugee sponsorship issues and matches them with prospective private sponsors. So far, the group has helped sponsors submit applications for about 2,500 refugees — mostly Syrians but also from Burundi, Somalia and Afghanistan. Swaisland now helps run the program’s Toronto chapter.

Earlier, Swaisland served as co-counsel in a successful court challenge of cuts to federal health-care benefits for refugees imposed in 2012 by the former Conservative government. Earlier this year, the new Liberal government — already committed to resettling thousands of Syrian refugees — restored full benefits.

“One hundred thousand refugees have better health care as a result,” says Swaisland, 35. “It’s amazing, knowing that you have been a small part of helping so many people. How often do you have an opportunity to help on that kind of scale?”

Swaisland arrived at U of G to study philosophy, with a minor in business. “I wanted a university with a sense of community and I heard that Guelph was social justice-oriented.” She went on to complete degrees at Queen’s University and Harvard Law School, and has worked at Waldman and Associates since 2009.

“Lawyers are people who can evoke change in society,” she says. “People who can challenge how things work and enter politics often have a legal background.” Practising refugee law involves a high proportion of pro bono cases and more than a little resilience. “You deal with people who have faced trauma and who have been through things nobody should have to deal with.” 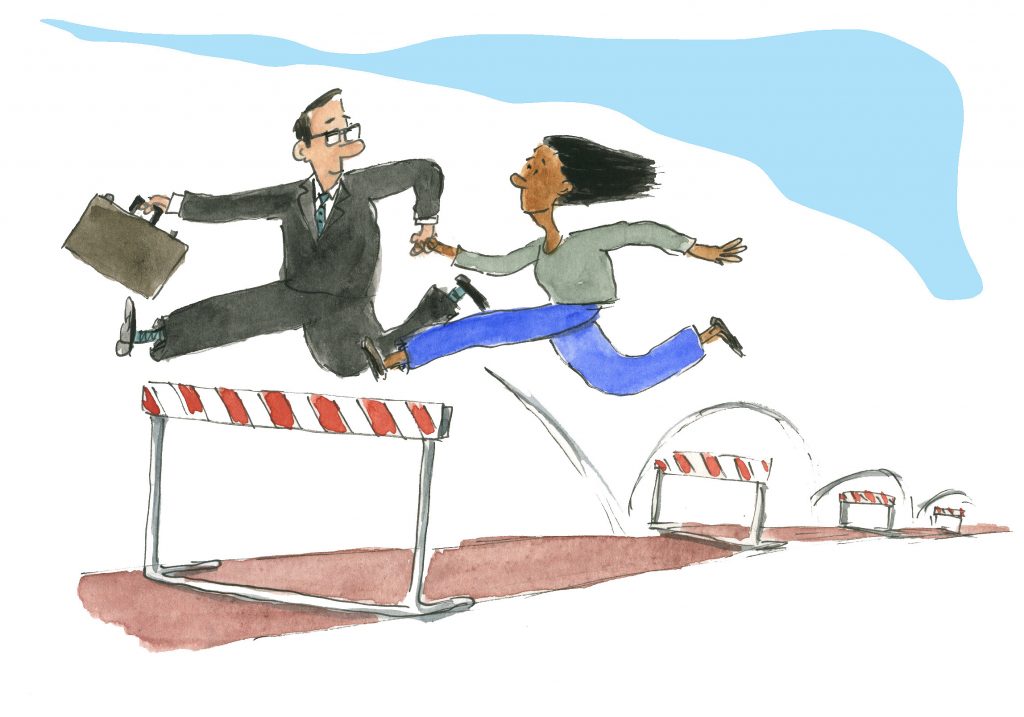 While at U of G, Swaisland was involved in student governance and worked on Interhall Council. So did Michael Stephenson, who came to U of G to study biomedical science. After graduating in 2002, he went to medical school. One day he heard a talk by a man who had been tortured in Iran and said Canada’s health-care system had been vital to his recovery. “I’ve always been interested in the care of more vulnerable populations,” says Stephenson, who spent time travelling through Central and South America, Asia and East Africa.

His residency took him to a Montreal clinic where half of the patients were refugees. Later he worked in Toronto at Access Alliance Multicultural Health and Community Services, a community health centre focused on refugees. After moving to Kitchener, Ont., in 2012, he realized that services were lacking right where he lived.

“I heard again and again there was a huge need in the region,” he says. “Refugees were facing a lot of access issues, and health providers misunderstood coverage and entitlement. I heard stories of insured refugees being turned away from walk-in clinics and emergency rooms.”

Working with local social service agencies, he established Sanctuary Refugee Health Centre in 2013. Today about 1,400 patients — mostly from the Middle East — are registered with the clinic. Stephenson, 37, retains a full-time social worker and a registered nurse, as well as other part-time specialists. He relies on volunteer receptionists, nurses and translators. Funding and administration are ongoing challenges, but he loves helping to improve people’s health and change their lives.

“I have the good fortune of being able to assist somebody to become established in Canada,” he says. “My patients have been through horrible life-changing events. Helping them move past this is an important part of settling into Canada.” Recalling his anger over the 2012 health-care cuts, he says he was among numerous practitioners who joined the court challenge to overturn that decision.

Prof. Edward Koning’s research also looks at migrants’ access to health benefits and social services. He says the Harper government invoked fairness and equitable access to health care to justify its cuts. Right idea, wrong approach, he says. To ensure the best chance of integration and to quell tensions between groups, Koning says the same benefits and social services need to be offered to all migrants.

Earlier this year, Koning found himself in demand as a local speaker on the Mediterranean refugee crisis. That’s where he met Jaya James, B.Comm. ’02, a policy adviser with the Ontario Ministry of Agriculture, Food and Rural Affairs based in Guelph. When Ottawa announced plans last year to accept 25,000 Syrian refugees to Canada, James, 38, was drawn to the mounting efforts to sponsor local refugees and raise funds.

She took a six-month leave from work to devote her efforts full-time to the cause as the volunteer director of Guelph’s Refugee Sponsorship Forum (RSF), which supports private refugee sponsors in the city. The organization recruits, trains and screens volunteers for various tasks, including transportation, housing, food and clothing collection, counselling for work and health care, and English-language training for new arrivals. More than 800 volunteers are organized into teams under the RSF umbrella.

“There’s a sense of relief because they got out [of the country], but there’s also anxiety because they had to leave some immediate family behind,” says James of the new arrivals she’s met, including many multigenerational families. “You can see how grateful they are, but also how concerned they are.”

By the time her volunteer appointment ended in late June, more than 20 families — mostly from Syria — had settled in Guelph and Wellington County. She expects to join the forum’s advisory committee and help with fundraising: the group hopes to raise $100,000 to support RSF operations until the end of 2017.

Last spring, Stephenson returned to campus to deliver the Last Lecture to the 2015 graduating class. He says Guelph introduced critical thinking skills and enabled him to investigate history, political science and the arts — all useful grounding for dealing with humanitarian issues. He encouraged graduates to apply these skills to make a difference in the world.

Next spring, it will be Swaisland’s turn to deliver the Last Lecture. Before that, her volunteer work is being recognized this year by awards from the Canadian Association of Refugee Lawyers and the Advocates’ Society, and with a Precedent Setter Award for being a “leader of tomorrow.”

She says much of her conviction stems from her U of G days. There’s a sense of enthusiasm and optimism around campus, she says: “There’s bad in the world, so let’s go help fix it.”