The U of G alumni family is growing strong with more than 122,000 grads living in 150 countries around the world. Much like a family reunion, Alumni Weekend in June brought almost 1,000 alumni back to campus to celebrate with class reunions, the President’s Milestone Lunch and the Awards of Excellence Gala, among other events. There were many reasons and events to celebrate our connections to the University of Guelph.

At a family celebration, you often get to know some distant family members, and this was the case at the Awards of Excellence Gala. We gathered to honour Harry Brightwell, DVM ’56; Karen Kuwahara, B.A.Sc. ’76; and Gavin Armstrong, B.Comm. ’11, PhD ’16, and we learned so much about each of them and their unique experiences.

We met Alumnus of Honour Harry Brightwell and learned about his extraordinary life. He graduated from the Ontario Veterinary College in 1956, and began trailblazing a path of success and service in the veterinary profession. Known for having more than one groundbreaking idea, he established a veterinary buying group in 1972 that now sees sales of $275 million a year. He also made key discoveries for keeping swine healthy, and found time to serve as a Member of Parliament and volunteer for many organizations.

We got to know Karen Kuwahara, retired president and CEO of Nestlé Purina Petcare. During a time when fewer than 25 women were CEOs of Fortune 500 companies, she forged a path and set an incredible example for women in business. As the recipient of the Alumni Volunteer Award, Kuwahara lives and breathes volunteerism and has served on U of G’s Board of Governors, Campaign Cabinet, and countless advisory boards and committees.

We also learned about Gavin Armstrong and the story behind the Lucky Iron Fish. As the recipient of the Alumni Medal of Achievement, Armstrong’s social entrepreneurship is saving lives in developing countries with a simple iron fish that helps prevent anemia and its terrible effects. His idea marries innovation and activism, using business as a source for good.

What we learned from our three esteemed alumni at the awards gala, is that having a great idea is only part of the picture. You also need passion, purpose and commitment to excellence. By combining these qualities, our alumni are charting new territory, developing life-changing solutions, and making a difference in the world. And they’re making their alma mater proud.

In June, almost 1,000 U of G grads attended the marquee alumni event of the year — Alumni Weekend. Reunions, tours and social events for all ages and interests were on the agenda.

The event kicked off Friday evening with the Awards of Excellence gala. The sold-out annual celebration of excellence honoured three distinguished alumni for their achievements. The President’s Milestone Lunch the following day was also sold out, with 350 grads from 1949 to 2010 celebrating their class anniversaries. 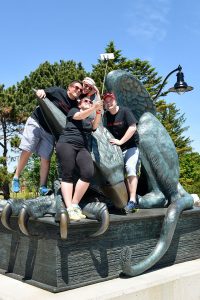 There were 23 class reunions held over the weekend, with alumni travelling from across Canada and the U.S. to attend. The Great Gryphon Race had alumni racing across campus on a timed mobile challenge, taking photos and answering U of G trivia questions. The Alumni Pub Night at the Brass Taps featured a beer tasting, marché-style dinner and live music.

Special tours allowed grads to see what’s changed on campus and learn more about programs and research. Highlights included an ice cream technology tour, and visits to MacDonald Hall, the arboretum, the School of Engineering and the Livestock Research Innovation Centre in Elora.

If you missed Alumni Weekend, mark your calendars for next year’s event June 9-10, 2017. If you are planning a reunion for 2017, we can help. Get in touch at alumni@uoguelph.ca.

Roberta Bondar, B.Sc. (Agr.) ’68, Canada’s first female astronaut, was a special guest and speaker at an alumni reception at the National Art Centre (NAC) in Ottawa in May. The reception was held prior to NAC Orchestr

Guests enjoyed hearing about Bondar’s 1992 Discovery mission, when she became the world’s first neurologist in space. Bondar spoke about how much she loved her time at U of G and that her diverse university experience boosted her chances of selection into the Canadian space program. Almost 100 alumni attended the event, which was hosted by Daniel Atlin, U of G’s vice-president, external.