Theresa (Terry) Cosgrove, BA ’68, has a piece of art displayed in the Centre for Contemporary Canadian Art database.

John Richardson, BA ’68, attended a U of G mini reunion this spring in London, England, and will drive from Alexandria, Egypt, to Cape Town, South Africa, in September with Brian Barclay, BA ’68.

Barry Heath, DVM ’72, published Mosie and Me: A Veterinarian’s Story, a humorous book about his summer experiences on his grandparents’ farm that led to his veterinary career.

Cinda Gault, BA ’76, MA ’94, published a new book called This Godforsaken Place. She is also an English professor at the University of Guelph-Humber.

“On Feb. 26, 2016, a group of Guelph graduates gathered at the Holiday Inn, Guelph, to celebrate the 40th anniversary of their graduation from the  agricultural diploma program. They were more fondly known to many as ‘dippers.’ These grads were in Class ’76A and became friends right away. Since graduation they have been getting together every year, renewing their friendships, catching up on each others lives and reminiscing about all the fun they had at U of G. ~ Submitted by Lynn Fischer

Ian MacPherson, BA ’77, and Valerie (Hanson) MacPherson, BA ’77, sold their retail business in Kenogami, Ont. and are now semi-retired. Ian remains an on-air contributor at CJKL-FM in Kirkland Lake where he has served as weather specialist for 25 years.

Catherine Wentworth-Stanley, B.Sc. ’77, received an M.Sc. with distinction in equine science from the Royal (Dick) School of Veterinary Studies at the University of Edinburgh in 2013.

Steven Oliver, B.Sc. ’79, is happy to report his son, Peter Oliver, has graduated from the environmental sciences program at the University of Guelph.

Jock Langford, B.Sc. (Agr.) ’82, retired as intellectual property adviser and international negotiator on the Nagoya Protocol (genetic resources). He is consulting on the protection of traditional knowledge and recently opened his online Langford Gallery.

Diane McClure, BLA ’82, recently produced an art show called “Home and Away” in London, Ont. The show featured 35 artists who described the Canadian immigrant experience through story and art.

Marian Thorpe, B.Sc. (Agr.) ’82, and husband Brian Rennie, PhD ’85, have retired from careers in education with the Halton District School Board. They have spent the past 30 years birding on seven continents and Marian is into her third career as an indie writer, reviewer and editor — her e-books, Empire’s Daughter and Spinnings, can be found on Amazon. The couple has returned to Guelph, living less than a kilometre away from where they met in South Residence.

Bruce Schouten, B.Sc. ’83, was appointed chief risk officer at Coast Capital Savings. He has more than 25 years of experience in the financial services industry, including corporate and commercial lending and credit adjudication, credit policy and enterprise risk management.

Kevin Wang, B.Sc. ’84, is an associate professor of psychiatry, neuroscience and chemistry at the University of Florida. He is also a scientific co-founder of Banyan Biomarkers, Inc., which is developing the first point-of-care blood test to diagnose traumatic brain injury.

Adam Socha, M.Sc. ’86, has been a toxicologist with the Ontario Ministry of the Environment and Climate Change for 30 years, and is currently science coordinator in the Director’s Office, Laboratory Services Branch. He is also secretary of the Society of Toxicology of Canada and the secretary of the OPS Analytical Laboratories Council.

Christiaan Vanderkop, BA ’86, is semi-retired and “finally riding a Harley.”

Rob Scott, BA ’89, has been promoted to OPP inspector and detachment commander in Perth County, Ont. He and Kimberly Morissette-Scott, B.A.Sc. ’90, are proud their son, (Robert) Bradley Scott, has chosen Guelph as the place to earn his engineering degree.

Leslie Woodcock, DVM ’89, was appointed chief veterinarian for Ontario. She is also director of animal health and welfare at the Ontario Ministry of Agriculture, Food and Rural Affairs.

Delma Lobo, BA ’95, moved from Guelph to the Sunshine Coast, B.C., to be closer to family. She is a freelance writer for online publications about Goa and Mumbai, India, and is also a member of a writing critique group. She says, “I am a huge proponent of ‘never stop learning.’”

Colin Dewar, BFA ’98, has published his first novel, Mammoth, which is available on Amazon.

Anne Clermont, B.Sc. ’99, will publish her debut novel, Learning to Fall, in August.

Marilyn Rayner, B.Sc. ’99, has been appointed a professor in food engineering at Lund University, Sweden.

Tamara Keeley, B.Sc. ’00, is a wildlife biologist and postdoctoral research fellow at the University of Queensland in Australia. She is featured in a video about predicting tiger pregnancy: vimeo.com/153846169.

Gabriela Flores, BA ’01, and Sarah Hutchison, BA ’01, founded Bliss B4 Laundry, which focuses on self-care and wellness for women.

Chad Nuttell, BA ’04, and his wife, Marie Crosta, are happy to announce the birth of their first child, a son named Grayson Anthony, on April 1, 2015.

Wesley Macdonald, B.Comm. ’08, writes: “Grateful for my experiences at U of G and how they’ve helped me become the leader I am today.”

Travis Cranmer, B.Sc. ’11, M.Sc. ’14, was a finalist for BioTalent Canada’s 2016 Catalyst Award for biotechnology graduates. He works as a plant pathology biocontrol technician at Vineland Research and Innovation.

Laura Pipher, B.A.S. ’13, is a third-year student at the Canadian College of Naturopathic Medicine.

Nathan Lachowsky, PhD ’14, is a new faculty member at the University of Victoria’s School of Public Health and Social Policy. 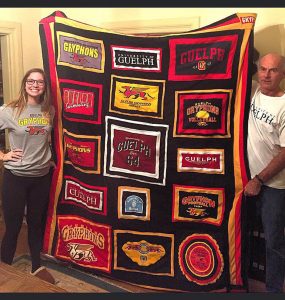 Craig Merkley, BA ’80, and daughter Olivia Merkley, B.A.Sc. ’16, hold up a blanket made from U of G paraphernalia that was handmade as a graduation gift.

“We both have a love for anything athletic and the spirit of Guelph in general,” says Olivia. “My stepmom actually came up with the idea for a Christmas/upcoming graduation gift. My dad and I are very close, and have really bonded over the fact that we both attended the University of Guelph and our shared love for the school. She thought it would be a nice memento of my time here, as well as my dad’s memories. She made it by hand, using articles of clothing my dad has collected over the years, as well as donations from friends who have also attended Guelph.”