Matt French tells stories not with words but with design.

An award-winning page designer and assistant art director for The Globe and Mail newspaper, he aims to create eye-catching page layouts that give readers a clear idea what the story is about before they read a sentence.

“The designer is there to make the message as clear and effective as they can,” says French, adding that a skillful design draws attention to the article rather than to the design elements, including graphics, photos and typography.

Take the Globe’s front-page coverage of last fall’s final report of Canada’s Truth and Reconciliation Commission. The story was illustrated by oversize numerals that punched out the key points: numbers of victims, witnesses and deaths associated with the country’s former residential schools.

“The story was the numbers, and the numbers are the impact,” says French, B.Comm. ’07. “It’s not about any highfalutin’ image or fancy colour.”

Most days, French, 30, helps design the newspaper’s front page, working with a “cast of many,” including editors, headline writers and the paper’s creative director. Over the past year, he’s designed more than 300 front pages and thousands more inside. 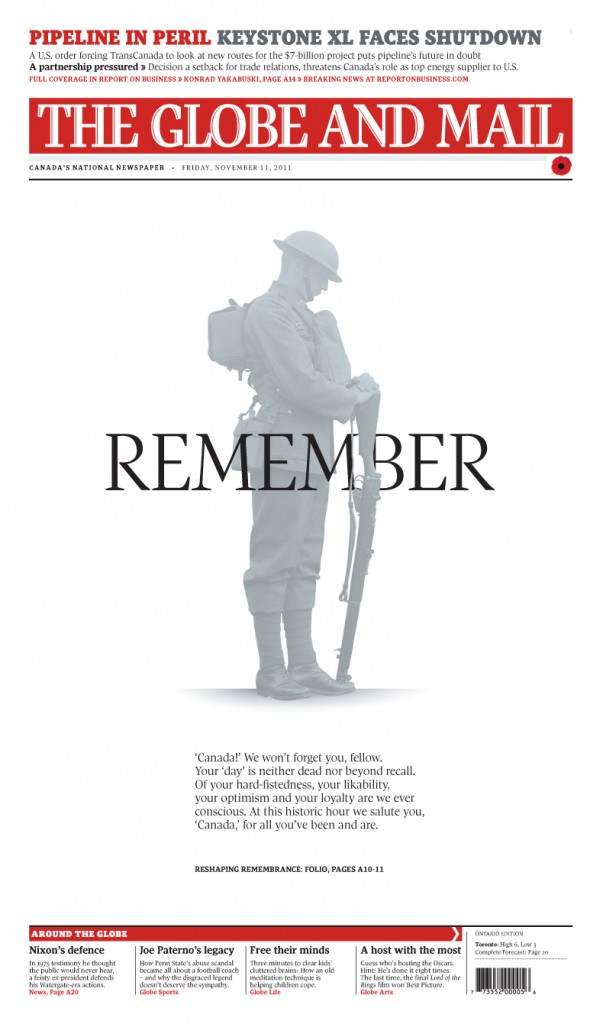 French’s design skills are self-taught, but his career path started at U of G. Always driven to do creative work, he pursued a commerce degree thinking he could “make a living doing something creative in business” such as working for a marketing agency.

During a summer job in a marketing department, French took a stab at creating promotional material for trade publications. Back on campus during third and fourth year, he then worked at Guelph’s student newspaper, The Ontarion, as photo and graphics editor, and layout editor. Recalling those days, he says, “You were able to cut your teeth doing what you wanted. Learning from your mistakes gave you the freedom to make mistakes.”

Following graduation, he worked at the Woolwich Observer. After three years there, he worked for 24 Hours, a Toronto commuter newspaper, and the Toronto Sun, among others.

Among his notable Globe projects, he points to an “Unremembered” series of articles last year about the suicides of Canadian soldiers and veterans who fought in Afghanistan, as well as the 11th-hour package of reports covering the 2015 federal election that vaulted Justin Trudeau’s Liberals into power.

Another favourite was the 2012 Remembrance Day cover, with the word “Remember” stamped over a soldier’s image. “It did what it was intended to do: cause the reader to pause and reflect.”

A fan of the Washington Post and the Guardian, French brings what he calls a simple and subtle but graphic approach to his work, as well as a refined sense of visual literacy — all without getting in the way of the story.

Sitting down to assemble a page, he knows that reporters and editors might have put months of work and passion into the article. “At the end, I’m the person responsible for taking it over the finish line, making it sing so that people connect with it.” – ANDREW VOWLES