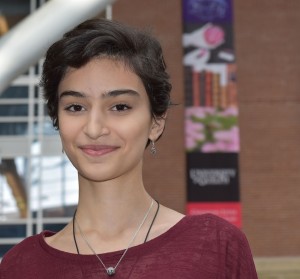 Next to her new winter clothing, that campus guide was a must-have for Kuwatly in early January. Newly arrived at U of G from Lebanon, the Syrian student needed to find her way around a snow-covered campus completely unlike anything she’d left behind in the Middle East.

“People are nice here,” she says with a slight Arabic accent. “People treat you differently than in Lebanon.”

By mid-February she had her bearings, but she was still missing her parents and siblings scattered between Lebanon and Europe.

Kuwatly arrived at U of G as a specially sponsored student under the Student Refugee Program run by the local chapter of the World University Service of Canada, an international development organization based in Ottawa. A second student is expected to start at Guelph in the fall semester.

Since the Syrian conflict began in 2011, and especially since the militant Islamic State took over parts of Syria and Iraq in 2014, millions of Syrian refugees have arrived in camps in Lebanon, Jordan and Turkey.

Kuwatly never endured the camps. Along with her mother and brother, she travelled in spring 2013 from her home in Damascus, Syria, to Beirut, Lebanon, where they found an apartment.

She had never heard of “Gelf,” as she pronounced the name while Googling U of G. And she knew practically nothing of Canada, except that “it was so cold here and far away.” Her online investigation turned up something even more important: Guelph was a safe place.

Her joy at being accepted was tempered by the notion of leaving her family. The worst moment was bidding farewell to her mother, a recollection that sparks tears.

She flew overnight on a chartered plane full of Syrian refugees travelling from Beirut to Canada. After staying overnight in Toronto, she was picked up by a University of Guelph team.

Kuwatly is taking a full course load this semester in a general science degree program. She’s thinking about medical studies and plans to return to Syria one day.

Referring to her generation’s responsibilities to that divided nation, Kuwatly says, “We have a country to build.”

She says she’s still lonely in Canada, but she’s grateful for a chance to live and study in a safe place where basic rights such as education are respected. “It’s a huge transition for me, everything is different, the people, the weather, the time difference. I sometimes feel like I’m not totally settled in here. There’s still a lot to know and do.

“I thought I couldn’t stay without my mom and here I am.”