Success for jockey Emma-Jayne Wilson depends on making split-second decisions while guiding a 540 kg horse as it races at speeds reaching 70 kilometres per hour.

“It’s not like a car where you have steering and brakes,” says Wilson, who in 2007 became the first woman to win Canada’s oldest and most prestigious race, the $1-million Queen’s Plate. “You have to persuade a large, powerful animal that has a mind of its own to do what you want.”

Riding lessons at age nine led to an accomplished decade-long career — although she may not be a household name, Wilson is one of the country’s most successful female athletes. She is Canada’s most winning female jockey with more than 1,200 career victories, and she has earned well over $60 million in purses for her mounts.

A lifelong love of horses led Wilson to study equine management at U of G’s Kemptville campus. After graduating, she took a job working behind the scenes for a trainer. She got her start racing horses when agent Mike Luider spotted her exercising racehorses at Woodbine Racetrack. Wilson made her professional debut in 2004 and won two of her first three races. By the end of the year, the Jockey Club of Canada named her Outstanding Apprentice Jockey, and in 2005 she received the Eclipse Award for the top apprentice in North America.

Wilson, 34, still works out of Woodbine, and on race days she’s at the track by 6 a.m. to exercise horses under instruction from their trainers. She then heads to the jockey room to handicap the afternoon races.

At the height of the season, Wilson can compete in as many as 10 races a day, four days a week. Many of the horses are familiar to her, but some she will be mounting for the first time.

“Being able to read a horse, to know its personality and build a rapport quickly is the most important skill for any jockey,” she says. “Some horses are quieter and need coaxing, and others are more aggressive and need to be told what to do.” 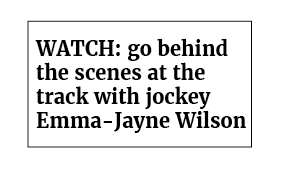 Even with the best preparation, Wilson says being ready to adapt is crucial: you never know what will happen until the race is under way. She once suffered a badly lacerated liver after falling off her mount and landing under a horse running at full speed. “I would be lying if I said there was zero fear, but if I let it affect me negatively, I would hang up my tack.”

Jockeys work on one-race contracts — if you want to keep riding, you have to keep winning. And the more you win, the better horses you get to ride. Where some might feel pressure, Wilson feels motivation.

“It’s definitely not a ‘normal’ job,” laughs Wilson. “But I’ve earned the right to be here. It makes me want to continue to get better and achieve. It’s all about perspective.”

After 9,000 races, what Wilson still loves most is working with a horse to achieve a common goal.

“I wish I could bring people on board to experience it: the moment when I’m on a horse who’s just as determined and eager to win as I am, and we’re fighting down the lane, tooth and nail — there’s no better synergy. It’s indescribable. I think it’s the best job in the world.”

On the job: long snapper Jake Reinhart plays one of the most specialized positions in football
On the job: an office on the water
On the job: Making science fun for everyone
On the job: Allison Day takes her kitchen online