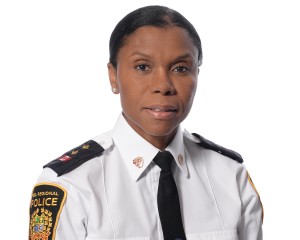 Ingrid Berkeley-Brown, MA ’14, doesn’t consider herself a role model, even though she’s the highest-ranking black female police officer in Canada. As superintendent of Peel Regional Police, she prefers to be a mentor who helps others reach their goals, whether that’s to work in law enforcement or another field.

Even before she became a police officer, she knew she wanted to help people. As the daughter of a police officer in Guyana, she came to Canada at the age of 14. “My goal was to work with youth,” she says, so she volunteered as a probation and parole officer. That’s when she met Sid Young, a retired black police officer in Toronto, who encouraged her to join the ranks.

She was one of only two black female recruits in a class of about 300 at the Ontario Police College, but she never viewed policing in terms of gender. “I am a strong and confident person, so I knew I could do the job. It was a matter of gaining the trust and respect of the other officers.”

Thirty years after joining the police service, she says policing hasn’t changed much; the day-to-day community interaction remains a big part of a police officer’s job. Technology has had the most impact on policing, giving officers more tools to fight crime.

Catching criminals is just one part of her job; community engagement and teaching the public how to stay safe are just as important. Working in crime prevention and race relations has helped her make inroads in the community, especially the black community.

Berkeley-Brown joins the ranks of other black police officers in leadership positions, such as Mark Saunders, a graduate of the University of Guelph-Humber’s justice studies program, who became chief of Toronto Police Services in 2015.

Lawyer turned 'Doctor'
Tackling concussions, head-on
The unexpected adventures of a vet in Newfoundland
Landing on His Feet
Engineering an 80-calorie cooler