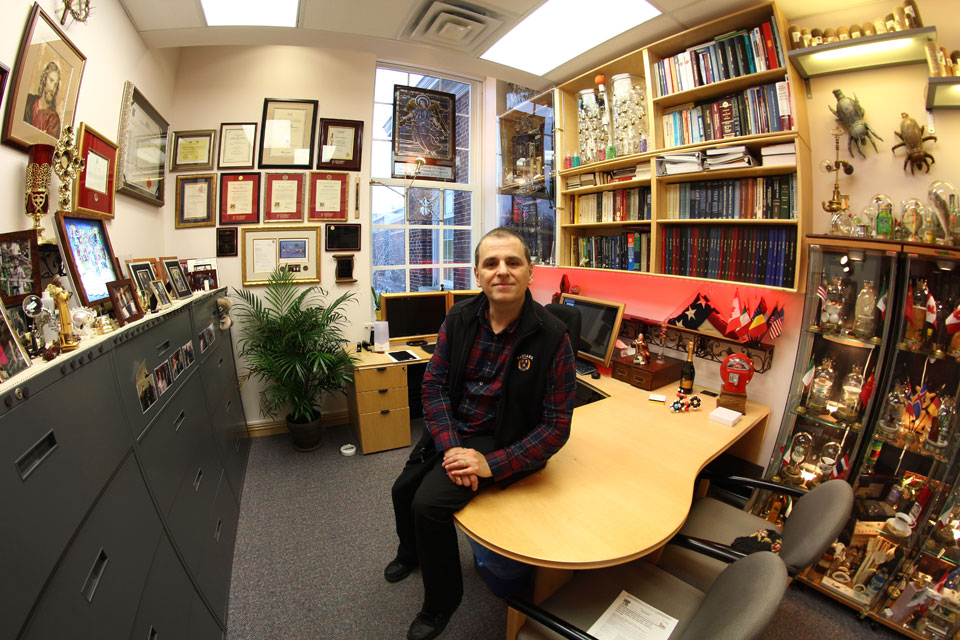 Renaissance collectors accumulated their treasures in rooms called cabinets of curiosities. Today, Prof. Massimo Marcone’s office in U of G’s Food Science Building is a wunderkammer whose collections reflect his world travels in search of exotic edibles — and light bulbs.

Arrayed on glass shelves, dozens of bell jars display unusual delicacies and associated paraphernalia collected by the U of G researcher from five continents over the past two decades.

On his office shelves are Kopi Luwak coffee beans harvested from an Indonesian civet cat’s feces to make the world’s most expensive java, selling for $600 a pound. He also has argan nuts excreted by tree-climbing goats in Morocco and pressed to yield salad dressing oil. Elsewhere are ant eggs, putrefied shark meat, Italian cheese made using maggots and morel mushrooms hunted in North American forests.

Marcone, a three-time Guelph grad, has used his biochemistry background to probe these foods’ contents, including how coffee beans change inside the civet’s digestive tract. He wrote about the allure and science of world delicacies in his books In Bad Taste? (2007) and Acquired Tastes (2010).

$3,600: Highest price Marcone has paid for a single antique light bulb — it’s the bulb used as an exhibit in a court case won by Thomas Edison over patent infringement.

Also in Marcone’s cabinet of curiosities are hundreds of antique light bulbs, including a collection of carbon-filament lamps made between 1885 and 1910. One private collector says Marcone’s bulb collection might be worth up to $50,000.

Flicking a switch, he turns a wall cabinet of bulbs aglow. “I’m working in light that goes back 130 years,” says Marcone, who started his collection about 20 years ago.

The collection is partly a nod to the perseverance of Thomas Edison, inventor of the first long-lasting light bulb in 1879. “Without his invention, I would be working in the office with a candle or lantern. It’s pushed us forward by light years.”

View more images from this story