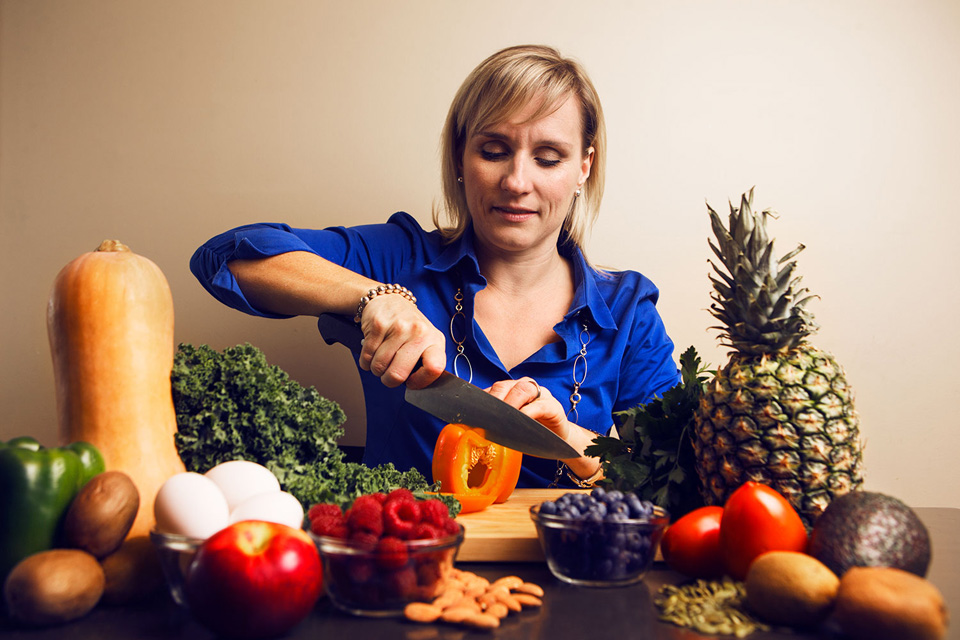 [dropcap]Y[/dropcap]ou are what you eat — that’s especially true of professional athletes whose success depends on what they consume before, during and after each game. As the sports nutritionist for the Toronto Maple Leafs, Jennifer Sygo is part of the team behind the team that keeps the players in top shape.

“A lot of people have been waiting a very long time for this team to win, and I’m so excited to have a tiny role in helping these players be the best they can be,” says Sygo, who began working for the Leafs last summer.

The team is already very health-conscious, so it doesn’t take much convincing for the players to adopt a healthy diet and lifestyle. Most of the players have been athletes since childhood and grew up in families that instilled healthy eating habits. You won’t find any junk food in their locker rooms because Sygo ensures that healthy alternatives are always within reach.

Sygo also works with national and Olympic athletes in various sports, and provides nutrition services to the Toronto Raptors. She says the biggest difference between working with professional athletes and the public is the access players have to experts who help them eat well, including personal chefs, dietitians and nutritionists. Even when they’re on the road, sports teams have healthy meals delivered to them so they don’t need to rely on fast food. “There’s no shortage of getting good food in their hands,” says Sygo, whereas the average person may not have the time or money to spend on a specialized diet.

Both professional athletes and their fans share a love of junk food. “Athletes are also human, and fries taste good to all of them,” she says. As a registered dietitian, she makes recommendations on how to make healthy choices, but ultimately it’s up to her clients — athletes or not — to decide what they put in their bodies. Each player is different and so are their dietary needs — some need to lose weight while others need to gain it. Sygo works with each athlete to develop a diet plan specific to their needs and lifestyle.

“Nutrition can make a big difference in performance,” she says, recalling her earlier work with a junior hockey player. He was eating a protein-heavy diet with minimal carbs because he wanted to avoid gaining weight. “We worked on a more balanced meal plan, and he noticed an almost immediate improvement in speed and endurance on the ice, not to mention mental focus off the ice,” says Sygo.

Not surprisingly, her own recipe for success includes a healthy diet and an active lifestyle. A sports fan since childhood, she grew up “playing a little bit of everything.” Her favourite sport was basketball, but she also played volleyball and enjoyed track and field, ultimate Frisbee and swimming. Now she prefers running. “These days it’s more about being healthy and active with my kids.”

After earning a bachelor’s degree in biochemistry, Sygo decided to apply her passions for science, sports and working with people in a career that combined all three: sports nutrition.

She enrolled in what was then the human biology and nutritional sciences program at U of G and completed a master’s degree in 2002. She took additional courses and internships to achieve the professional designation of registered dietitian (RD). “It took almost nine years from the start of my undergrad to the time I got my RD, but it was totally worth it.”

She brings her message to the masses with a regular column for the National Post, and on television and radio programs. Her 2014 book, Unmasking Superfoods (HarperCollins Canada), was a national bestseller. 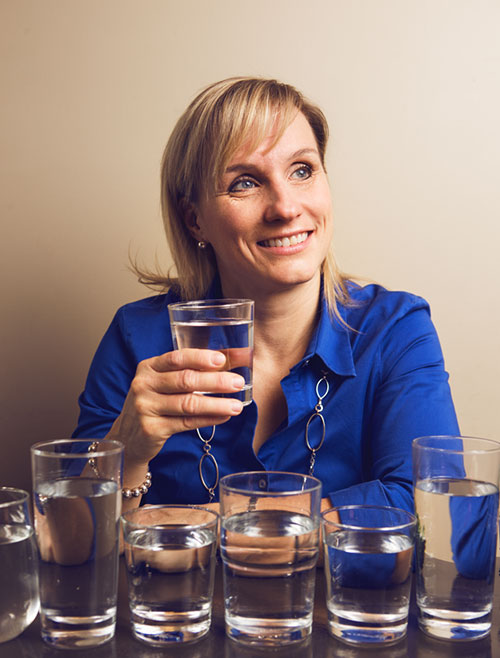 What are some of her most popular columns? “Whenever I write about the paleo diet, I get a lot of attention,” she says. Paleo involves eating a caveman’s diet of unprocessed foods such as fruits, vegetables and meat, while excluding grains and dairy. “It’s nonsense,” she says of the paleo diet. “You’re cutting out large portions of what would be considered to be a healthful diet: grains, dairy and even legumes.”

Another column addressed “dietary dogma” or the strong – and often inaccurate – opinions that people have about diet and nutrition. “It seems that if you yell the loudest you get the most attention, so we have a lot of people who are making claims about certain diets or certain foods or certain ways of eating as being the right way in almost a religious kind of way,” says Sygo. She’s not the only one concerned about people taking non-expert nutrition advice. Dietitians around the world have thanked her for addressing the topic because their clients often receive conflicting advice from celebrities and the media.

One of the most common food myths she hears from clients is that eating one type of food is going to change their lives, help them lose weight or prevent disease. “The idea that eating a certain berry will help you lose weight or eating a particular vegetable will prevent cancer is unrealistic,” she says. “You really have to look at the totality of someone’s diet to see how their weight and their health are going to be affected.”

The way we eat is just as important as what we eat, she says, because making sustainable choices allows us to eat foods that are healthy and produced with minimal environmental impact. “Do berries from the Amazon jungle need to be on our table if we can find something that’s equally healthy and local, and that requires far less energy and resources to produce and get to consumers?”

Although it’s her job to help people follow a healthy diet, even Sygo has a food weakness: cereal. “I could eat it for breakfast, lunch and dinner, but obviously that’s not a terribly balanced diet.” She admits that she wasn’t the healthiest eater when she was a kid, citing Kraft Dinner as one of her favourite meals, but that has made her more sensitive to her own clients’ food vices. Now she eats a salad every day and enjoys preparing healthy meals for her family, including her signature beef barley soup.

Sygo keeps her family’s fridge stocked with healthy foods such as milk, yogurt, eggs and fruit. Her family tries to eat meals together whenever possible, and she encourages her kids to eat at least one bite of whatever is on their plate.

“We try to enjoy a wide variety of foods, and over time, kids will develop a palate for things you might have thought were impossible for them to like at first,” she says. “For example, my kids love chickpeas, kale chips and mangoes and they usually eat their veggies, but if you offer them candy or french fries, they’ll be more than happy to eat those, too!”

I have to drink eight glasses of water a day.
That’s a massive myth and it’s one that unfortunately still shows up in well-regarded places. You’ll see nutrition professionals and doctors recommending it in magazines, and it’s not based on any real data. It’s based on the idea that people generally need about two to 2.5 litres of fluids from all sources per day. That includes fruit, vegetables and foods that contain water like soups and yogurt as a totality. An individual’s water use is really variable, depending on your size, how active you are and your sweat rate.

Sports drinks are the best post-exercise beverages.
It depends on the sport, athlete and various other factors, even the weather. In some cases, sports drinks can be a real benefit to athletes, especially when it’s hot or humid, or if the athlete is already dehydrated, which can happen in a tournament setting, a long run or ride for 90 minutes or more, or if an athlete has already trained once that day and is feeling tired. But for most athletes and weekend warriors, water is best.

A gluten-free diet is healthier.
I do believe that gluten-free diets have their place — obviously if someone has celiac disease, there’s no question. There’s also thought to be a condition called non-celiac gluten sensitivity that could affect five to 10 per cent of the population. For those individuals, following a gluten-free diet makes good sense and it may be medically necessary. For the rest of us, there really isn’t any convincing evidence that you need to be gluten-free.

Whole grains are better for me.
Yes, their nutrient content tends to be higher than what you get from a refined grain. For example, quinoa is particularly high in magnesium, which is a nutrient that North Americans generally don’t get enough of. It plays a very important role in our cardiovascular health, in particular blood pressure control and possibly strokes. Whole grains have a higher amount of those key nutrients such as magnesium, fibre, B vitamins and iron, so you have the nutritional benefits. They also tend to be eaten in intact form, which is also a benefit. You’re eating the quinoa as actual quinoa versus a ground-up form, turning it into a flour. When you eat any food that’s been pre-ground or taken from its original form and made highly digestible, you tend to absorb more of the calories from that food.

From Visual Arts to Virtual Reality
Sustainable Solutions
U of G Alum on Award-Winning ‘Arctic Corridors and Northern Voices’ Team
A new food revolution
U of G Grad Cycles, Swims, Runs the Distance in World Triathlons