Jerrold Beech, Dipl. ’67, joined a writer’s group after being diagnosed with Parkinson’s disease eight years ago. He recently completed his third book with all proceeds going to Parkinson’s research.

Adeline Misener, B.H.Sc. ’68, established the Rotary Club of Hanwell in Nova Scotia with 21 members. Misener is the club’s first president and was recognized as a Paul Harris Fellow by Rotary International for her achievements. 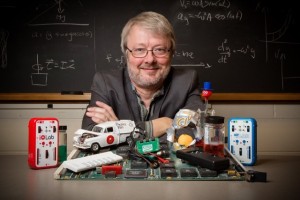 Mats Selen, B.Sc. ’82, M.Sc. ’83, received the 2016 U.S. Professor of the Year award from the Carnegie Foundation, and the Council for Advancement and Support of Education. He is a physics professor and associate head for undergraduate programs at the University of Illinois.

James Ball, B.Sc. ’85, M.Sc. ’87, received the Irwin Talesnick Award for Excellence in Teaching from the Science Teachers’ Association of Ontario. He is a physics teacher at John F. Ross CVI in Guelph.

Desmond Layne, B.Sc. (Agr.) ’86, is director of two undergraduate programs at Washington State University. In addition to program administration, he is also a professor of pomology in the Department of Horticulture.

Ed Barre, PhD ’92, was promoted to full professor of human nutrition at Cape Breton University. His research involves type 2 diabetes and its potential molecular triggers, as well as pre- and post-onset management. He lives in Sydney, N.S., with his wife, Kazimiera, and their son, Alexander. Their daughter, Emily, teaches secondary school in Barre’s hometown of Barrie, Ont.

Jennifer Spreckley (nee Kinsman), B.Comm. ’94, is founder and director of Kingsway Pilates, a boutique home-based studio in Toronto. She is also hoping to educate schools on the importance of integrating more movement into the classroom.

Jane Lewis, BA ’95, is a Guelph-based singer-songwriter. She recently released a video of her cover of the Beatles’ Come Together, which can be viewed at janelewis.ca.

Deborah Lynn Rumble-Dani, BA ’95, is taking cooking classes with Greenwich College and hopes to volunteer with the Greenwich Community Hospice and the Stables Care Centre in Charlton, England.

Terence Humphreys, PhD ’01, was elected president of the Society for the Scientific Study of Sexuality.

Andrew Kaszowksi, BAA ’06, started a new role as communications lead at the South West Community Care Access Centre, where he is responsible for communicating the rollout of integrated electronic health records in the region.

Kyla Baron, B.Sc. ’07, defended her PhD thesis in December 2015 and will graduate from the Faculty of Medicine at the University of Ottawa in June.

Megan Dell, BA ’07, was married in December 2014, and will welcome her first child with her husband in May. She lives in Western Canada and works as a sales manager in the hotel industry.

Jennifer Althouse, BA ’08, and Stuart Clark, BA ’08, will be married in Toronto in August.

Pat Bowley, PhD ’13, wrote a new book about the University of Guelph’s ice cream technology course called Celebrating 100 Years at the College of Ice Cream. The book looks at the origins of the course at U of G, as well as the ice cream industry in Ontario. Bowley wrote an earlier book about the history of soybean farming in Ontario.

Melissa Zigler, B.Sc. ’14, is in her second year of veterinary school at the Royal (Dick) School of Veterinary Studies in Edinburgh, Scotland.

Cole Crawford, B.Comm. ’15, cycled from Vancouver, B.C., to Miami, Fla., to raise money for school supplies and bicycles for teachers in Cambodia. To read about his adventure, visit sols24x7ride.com.

Nichole Reynolds, B.Comm. ’15, got married, moved from Ontario to Saskatchewan, and “landed an awesome job that’s the start of a career.”