The baby mountain gorilla cradled in his mother’s arms is very sick: he’s lethargic and not nursing, and has a yellow discharge from his eyes and nose. Veterinarian Mike Cranfield, DVM ’77, suspects a respiratory virus complicated with a secondary bacterial pneumonia. Without medical intervention, the baby will die.

Cranfield, along with Congolese veterinarian Eddy Kambale and several park rangers, have walked an hour through community farmlands to the Virunga Massif park boundary in the Democratic Republic of the Congo, and then endured another hour of steep climbing through thick rainforest vegetation to reach this troop of mountain gorillas. Now they move cautiously: the troop of eight includes three mature silverback males weighing up to 400 pounds each and one younger blackback male. The gorillas watch warily as the veterinarians approach.

“Gorillas are vegetarians, so silverbacks and blackbacks won’t attack you as food, but they’ll do what they have to do to protect their troop,” says Cranfield, co-director of Gorilla Doctors, a non-profit organization dedicated to bringing gorillas back from the brink of extinction through life-saving veterinary medicine.

Kambale anesthetizes the mother with a dart and the countdown begins: the veterinarians have 40 minutes until she wakes up. Moving quickly, Cranfield and Kambale inject the baby and mother with antibiotics. No reaction from the baby. They then collect samples from the mother to help diagnose the medical problem. Cranfield also wants to swab the baby’s nose to gather secretions for testing. As he gently turns the baby’s head, the tiny animal lets out a squawk. The male gorillas charge.

[dropcap]That[/dropcap] baby gorilla’s life represents hope for a critically endangered species. In the mid-1980s, research by American gorilla expert Dian Fossey indicated fewer than 250 mountain gorillas remaining in the Virunga Massif, home to one of two mountain gorilla populations. Because of their restricted habitat and slow reproductive rate (about one baby every four years), the work to protect and help increase the gorilla population has been slow, difficult and dangerous.

The mountain gorilla’s habitat is limited to two protected areas in Africa: the 450-square-kilometre Virunga Massif, which spans national parks in Rwanda, the Democratic Republic of the Congo (DRC) and Uganda; and the 331-square-kilometre Bwindi Impenetrable National Park in Uganda. The land surrounding the parks is some of the most densely populated in Africa, and the countries the gorillas call home are among the most volatile in the world.

As a result, gorillas face numerous threats, including poaching and habitat loss. But the biggest health threat may come from human-borne infectious diseases. Gorillas share more than 98 per cent of their genes with humans, making them extremely susceptible to human viruses and bacteria — with no immunity, a common cold can be deadly.

Gorilla Doctors is continuing and expanding on Fossey’s appeal to save the species by providing veterinary care to individual gorillas in their habitat. Co-director of the organization since 1998, Cranfield oversees a team of 12 African veterinarians, plus other support staff, most from the communities near the gorilla ranges. The organization works in Africa providing preventive and clinical care for mountain gorillas and eastern lowland (Grauer’s) gorillas, even performing surgery on the jungle floor. It also provides health care and treatment for orphaned gorillas in three sanctuaries, and supports health programs for the people and their animals living in the area as part of its “one health” approach. In addition, Cranfield’s team conducts research, and regularly collects gorilla and human medical samples to help predict new pandemics through the United States Agency for International Development’s Emerging Pandemics Program.

Their efforts seem to be working: today, there are 880 mountain gorillas in the world, with nearly 500 living in the Virunga Massif. An improvement, but the species remains at high risk for extinction. 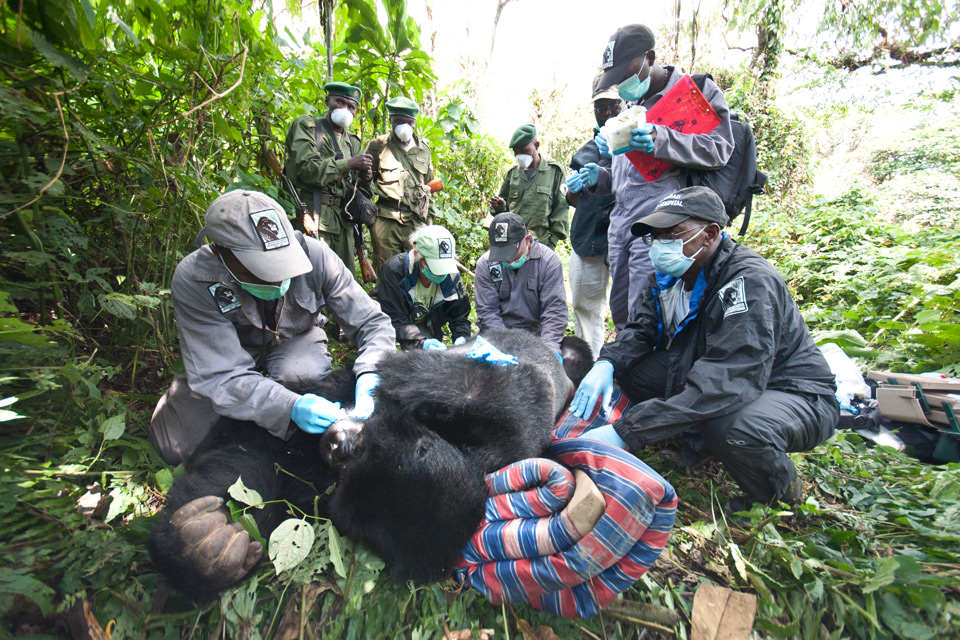 [dropcap]It’s[/dropcap] a long way from the Riverview Park and Zoo in Cranfield’s hometown of Peterborough, Ont., to the mountains of Africa. While attending the Ontario Veterinary College (OVC) with plans of a career in the dairy field, Cranfield worked at Riverview as a zookeeper in the summer months. The experience sparked his love of wildlife. “I liked working with cows and other livestock, but those (zoo) animals were something special.” He still returns to Riverview each year to work for a week.

After graduating, he worked in a large animal practice before landing the first joint residency with the Toronto Zoo and OVC in zoological medicine and pathology. He later moved on to the Maryland Zoo in Baltimore, where he focused on research and the preventive health care of its 1,500 animals. Cranfield joined the Mountain Gorilla Veterinary Project, the precursor to Gorilla Doctors, in 1998. 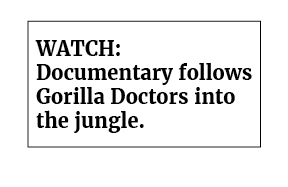 “Mike’s easy to get along with and a lot of fun, but he has this strong commitment and cares deeply for the gorillas and the people he works with,” says Dale Smith, a pathobiology professor at OVC who has worked with Gorilla Doctors in Africa identifying diseases affecting the gorillas and potential risks to humans. “And he’s right out there working in the field with everyone else.”

Cranfield usually spends about five months a year in Africa (he’s spent almost all of 2015 there), and much of that time is spent in the jungle. Gorilla troops are monitored daily by trackers, and teams of veterinarians perform jungle rounds to each group once a month to perform health checks, recording information such as body condition, activity and respiration for each gorilla group. If a gorilla is suffering from a human-induced or life-threatening injury or illness, plans are made to medically intervene. The vets can follow a troop for up to four hours through dense vegetation to find a clear shot to deliver antibiotics or sedate an animal. If a gorilla spots a tranquilizer gun, it will often vocalize an alarm and the whole troop will race away. Gorillas have bitten trackers and veterinarians while trying to protect their families.

Heavy rains often turn the pathways to mud or force the team to climb steep terrain in layers of wet, slippery vegetation. Other days, extreme heat adds to the difficulty. Park rangers and porters assist the veterinarians by carrying equipment bags, which weigh about 30 kilograms each.

Gorilla Doctors works closely with governments and the United Nations to monitor safety issues in the region, and their work has been suspended because of political unrest and warfare in DRC. In the last 10 years, 140 government park rangers in DRC have been killed protecting the gorillas. Gorilla Doctors had one close call — a team in DRC was held at gunpoint by rebels, but no one was hurt.

Cranfield says despite the risks and hard work, the interventions they perform are necessary.

“We feel if we make some headway with gorillas, we can help other species, too,” he says. He calls gorillas a “flagship species” — if habitats are preserved for them, many other endangered animals that share their territory are also protected. Cranfield also suggests proactively vaccinating gorillas against disease to ensure their survival. 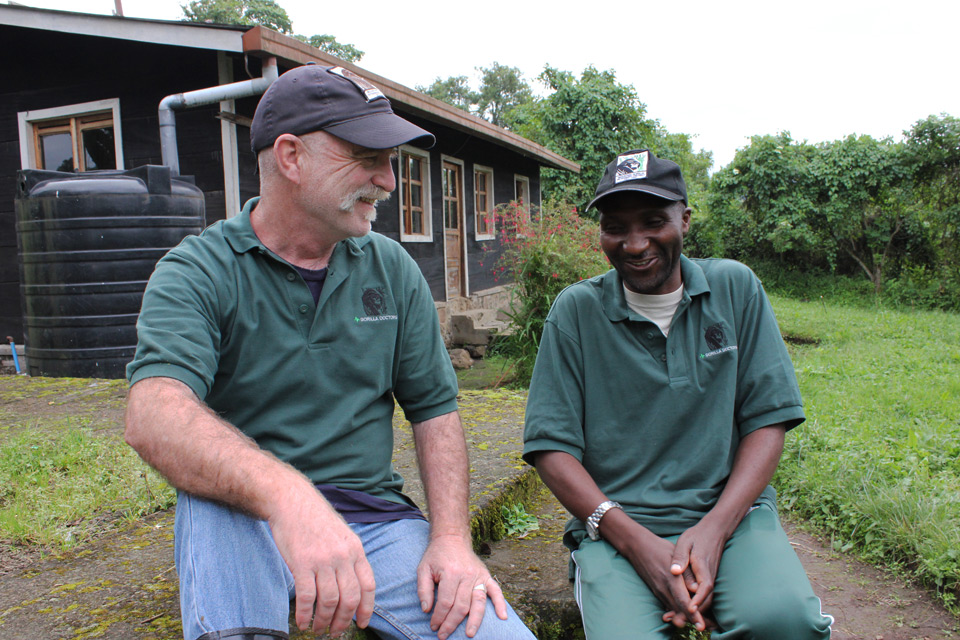 Some conservationists say the organization is going too far, and their interactions with the gorillas are making the species less wild. Of the 880 gorillas in the world today, up to 500 are human-habituated, meaning they are accustomed to the presence of humans. Ecotourism also plays into this — every year 30,000 people travel to Rwanda alone for a chance to visit the gorillas. The money generated helps the park and the gorillas, but exposing the animals to so many people also increases the risk of disease transmission.

“It was imperative to act quickly, which stopped the downhill trend in gorilla numbers, and now it’s the only known population of great apes to be on the increase,” says Cranfield. “And the truth is, the gorilla habitat and behaviours have already been affected by the tourists and communities. It’s not a natural situation at this point.”

Cranfield feels Gorilla Doctors has achieved a good balance by focusing on treating human-induced or life-threatening situations. The veterinarians always weigh the emotional well-being of the troop against any intervention before deciding on a course of action. If a mother is killed and an infant needs treatment, for example, the vets will study the interactions between the baby and its father or other members of the troop, and balance the need for medical treatment with the fragile social implications of an intervention. The organization has never removed an animal from the wild — orphans are only confiscated from poachers who have taken them from their habitat.

This balanced approach seems to be working. A comprehensive study led by American primatologist Martha Robbins published in 2011, shows the life-saving veterinary care provided by Gorilla Doctors may be responsible for up to 40 per cent of the increase in the gorilla population. That, Cranfield says, makes the effort worthwhile.

[dropcap]Back[/dropcap] in the Virunga Massif, with four charging male gorillas coming straight for them, Cranfield and his team had only one course of action: “We just got out of there as fast as we could,” he says. “It was very unnerving.” With the team at a safe distance, the silverbacks are calmed and the veterinarians can monitor the mother and baby as they recover.

Cranfield didn’t get the nasal swab, but when the team returned to check in on the troop the next day, he could see an improvement. The baby, now alert and inquisitive, was nursing and appeared to be on the road to recovery.

For Cranfield, the thrill of having an impact and working hands-on to save a species is just one aspect of his job that he loves.

“Gorillas look at you with intelligence in their eyes,” he says. “While I appreciate the challenge of a complex clinical case, my favourite days are when I can observe the gorillas in a relaxed situation, just doing their normal activities.”

How you can help the gorillas:

• Conserve energy at home by reducing energy and water use.
• Invest in “green” companies that aren’t harming the environment.
• Donate at  gorilladoctors.org.