When Scott Duke moved across the country to small-town Revelstoke, B.C., he had a clear plan: snowboard 100 days of the year.

To put that plan into action, he needed a job. For Duke, who first ventured into the world of entrepreneurship as a teenager, this didn’t mean working at the local coffee shop or ski hill; it meant starting a business. He quickly established his sixth startup company, Duke’s Dogs, a hot dog cart in the downtown area.

“It was a way to earn enough money to comfortably support myself while working minimum hours that didn’t conflict with snowboarding during the day,” says Duke, B.Comp. ’05. “It also had low overhead, high margins and didn’t require staff. I still think of it as one of my more successful ventures — it achieved everything it set out to do.”

That was seven years ago. Today, Duke, 33, is still based in Revelstoke, but he’s moved on from the hot dog cart. He’s now the owner of Stoke FM, a radio station he started in the basement of his house, and a property management company. He’s also a city councillor.

“I’m into whatever I can learn,” Duke says of his business strategy. Since graduating he’s also run a jet-ski rental business, a boat-cleaning company and a wakeboarding camp. Not everything worked out: a snowmobile rental company was a flop but still a learning experience.

Many entrepreneurs create a business based on their passion or interest. For Duke, the product or service he offers is secondary.

“What I’m passionate about is finding voids in the marketplace and figuring out ways to fill them.”

DUKE’S KNACK for spotting an opportunity goes back to his teenage years in Mississauga, Ont. Seeking a better alternative to his local high school, he settled on an arts school. He wasn’t particularly artistic, but he did see an opening in the music program, where few students played the saxophone. After a year of intensive classes to learn the tenor sax, he applied and got in.

His first business was Fleece It, a project he started with other students in his entrepreneurship class. They made fleece gloves, hats and scarves, and Duke did the majority of sewing and production on his mother’s sewing machine.

In high school he also discovered software programming, which he enjoyed. Most diehard computer science students he knew headed for the University of Waterloo, but he liked Guelph’s location, size and culture. “It has a small-town feel but it’s not a small-town school.” With a tech boom going on, companies were plucking students out of computing programs almost before they could complete them. Within the first year of Duke’s degree, that boom went bust.

But he gained other benefits besides learning how to program. Duke says Guelph taught him how to continually learn and the importance of social interaction. And he found something else while on campus: a way to combine his longtime love for the outdoors with a budding passion for entrepreneurship.

Duke was five years old when he started waterskiing on Georgian Bay — he switched to wakeboarding at 12. Into his teens, he realized that keeping up watersports would take equipment, which required money, and “profits are better than wages.”

During his U of G studies, he started a painting outfit in Muskoka, Ont., which grew to include 25 employees. “The work was never for work — it was to learn and support a fun habit. The only way to make money and have free time to wakeboard was to run something of my own,” says Duke, who also learned about the stress of entrepreneurship when he landed in the hospital with an ulcer.

After graduating, he opened Basecamp, a wakeboarding camp on Muskoka’s Lake Rosseau, and ran it for five years. By the time he sold the business, it was the largest wakeboard facility in North America.

“I’m of the thought that you’ve never ‘made it,’” says Duke. “I’ve just lived my life always doing what I wanted to do. There was a time I wanted to own a successful wakeboard facility. After I accomplished that goal and learned all I could from it, there was no reason to continue running the business.”

During those years, he began spending winters skiing in the British Columbia interior. In 2008, he moved to Revelstoke, a former railway town that has become a winter sports destination and is home to about 8,000 people. “I came out here for the lifestyle — same as any decision I ever made in my life.”

AS AN OUTSIDER, Duke spotted an opportunity. Revelstoke had a commercial radio station, but he saw room for a community-based alternative. Not that he had any experience in radio: as a student, he wasn’t even involved with Guelph’s campus station.

“Think of someone running a radio station and you think of someone passionate about music,” says Duke, whose station bio gleefully highlights his lack of radio and music credentials. Despite his musical taste being “generic,” he saw a gap in the marketplace, and after some research, knew he could fill it.

Stoke FM began in his basement — he funded its startup costs by holding concerts, and raised the necessary $10,000 after three events. To get it up and running, he had to learn about equipment and operation, which included bolting a 17-metre antenna to his house. He also had to navigate the strict regulations of the Canadian Radio-Television and Telecommunications Commission, and Industry Canada. After just four months on the air, the business broke even. Stoke FM stayed in Duke’s basement for two years, where he picked the music and hosted a morning show, until earlier this year when the station moved to a downtown office space. It now has five employees and owns 85 per cent of the market share. But Duke doesn’t count it as a success quite yet. 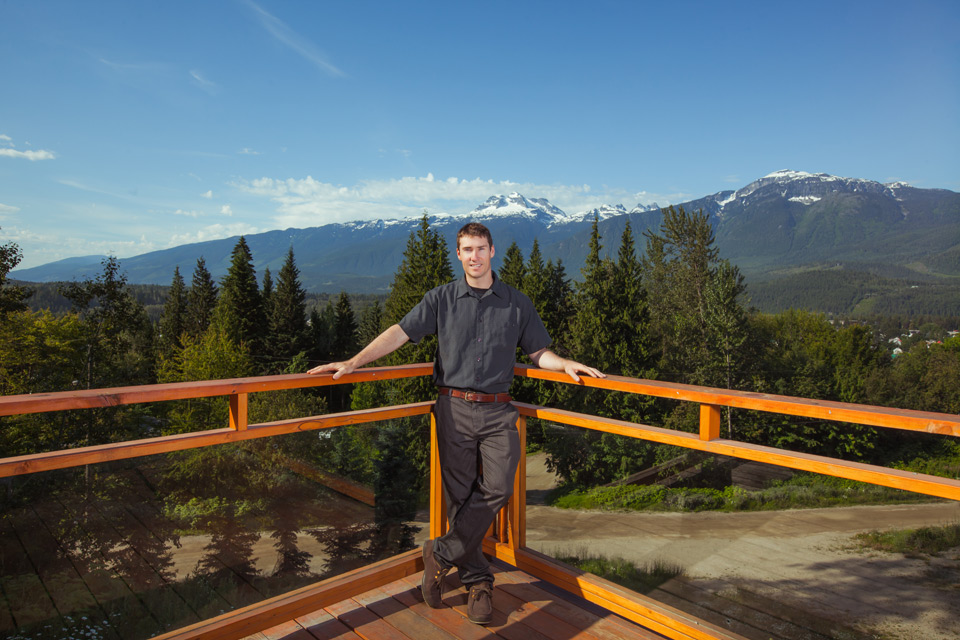 “The first cheque I put in the bank from a radio advertiser gave me a great feeling of accomplishment,” says Duke. “But those feelings are always temporary because running a business has daily ups and downs. For instance, today I have three ad sales calls and I have to sell all of them to ensure we have enough cash flow this month to make payroll in eight days. The day I hand off a fully operational station to a new owner, I’ll consider the business a success.”

Duke also operates a property management company with his partner, Eve Northmore. It started as a vacation rental business, but he saw a development boom coming to town. Revelstoke Property Services now manages 160 units, both residential and commercial, and also includes a cleaning company.

Being an entrepreneur in a small town can have its challenges: staffing shortages, limited resources and a small customer base. But Duke says less competition is a big benefit. Where some see obstacles, Duke sees opportunity.

“What’s nice about a small town is they’re like Petri dishes: you can do something here, test it out and then scale it up.”

LAST FALL Duke won election to city council. From its blue-collar roots in rail and logging, Revelstoke has become a tourism magnet with more resort properties. “I really like it here,” says Duke, who has created a hobby farm in the backyard he shares with Northmore, complete with chickens and daily fresh eggs. “It’s not that I can save the town (from development), but I can be a part of making it better.”

Earlier this year, Duke launched yet another new company to buy and sell other businesses, and he’s taking continuing education courses through York University and the International Business Brokers Association. He says his biggest challenge is concentrating on a single career path, but thinks the business brokerage could ultimately be his main focus.

“I think biting off more than you can chew is really the only way to grow,” he says of his growing portfolio. “Constant learning and the application of new knowledge is truly the key to success. I think most people understand this, but they’re too nervous to practically apply what they’ve learned or they’re too lazy to learn in the first place.”

As for Duke’s pursuit of the ideal lifestyle, he may not be snowboarding 100 days of the year, but his priorities are the same: work hard at what he loves, play hard as much as he can and choose the path that’s right for him, even if it’s a more difficult one.

“I ride my bike to work and I can go skiing on Canada’s highest vertical mountain during my lunch break,” he says. “Yesterday I did a business deal in the gondola going up to the top of the mountain to have coffee. Although I have to piece together many smaller ventures to total an income that’s equivalent to one decent-paying managerial job in the city, it’s worth the trade-off many times over.”

The craft of beer making
A bright future for clean energy
Lang gift rooted in desire to improve life
Tim Lambert: Champion of the Humble Egg
U of G’s Living Lab