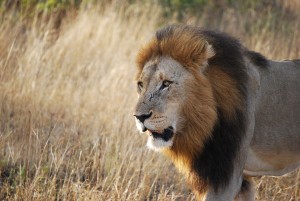 Why aren’t there more lions when there’s plenty of prey on the African savanna? A team of researchers, including integrative biology professors John Fryxell and Kevin McCann, found that relative amounts of predator and prey biomass in diverse ecosystems around the globe are remarkably well-predicted by a simple mathematical function called a power scaling law.

The resulting “power law” shows there are always fewer top predators than expected in resource-rich ecosystems than in resource-poor ecosystems.

The study, co-authored by Fryxell and McCann, was published in Science.

The researchers looked at biomass and production measurements in grasslands, forests, lakes and oceans. They analyzed results of more than 1,000 previous studies conducted in more than 1,500 locations worldwide.

No matter where they looked, they found the same predator-prey ratios. “We kept being astonished,” says McCann. “This is just an amazing pattern.”

As you add more individuals of prey species to a resource-rich ecosystem such as the savanna, you might expect the biomass of predators to increase at the same rate, says Fryxell.

Instead, the ratio of predators to prey falls dramatically in that productive grassland.

“What is it about a productive system that accounts for reduced predator success?” he said. “When a system is teeming with prey, why are predators leaving so much food on the table?”

Biologists don’t yet have all the answers.

The paper calls for a new look at ecological mechanisms that shape food webs in similar ways around the planet. Fryxell says understanding these processes will likely yield better ways of conserving and managing natural resources.