Have you ever lied in a job interview? Based on the findings of a recent study by U of G researchers, chances are you probably have. 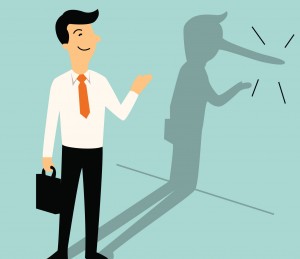 Leann Schneider, a U of G PhD student in psychology, and Prof. Deborah Powell, Department of Psychology, along with co-author Prof. Nicolas Roulin, human resource management at the University of Manitoba, videotaped more than 100 participants in a mock job interview and then asked each one if he or she had been dishonest. Ninety-four per cent admitted to lying.

Although employers are often unable to detect deceit, behavioural cues can help differentiate the liars from the truth-tellers. Key findings show that:

A straight face could be a lying face

Liars tend to over-control their movements, so those who smile less and show a pattern of restrained facial behaviour are usually more deceitful.

Although anxiety is often associated with lying, the study shows that candidates exhibiting interview anxiety are actually less likely to lie. “Don’t write someone off if they’re looking anxious during an interview,” says Schneider. “It may not mean they’re a poor person for the job.”

Powell suggests asking the job candidate to perform a skills-based test related to the position for which they are applying. “You can’t really lie when you’re demonstrating your skills.”