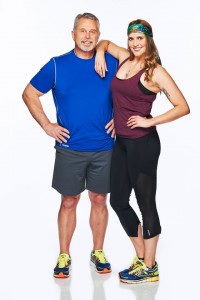 At 62 years old, Neil Lumsden was the oldest competitor on the most recent edition of The Amazing Race Canada, which aired over the summer. But when his daughter Kristin, 31, asked him to be her teammate and apply for the show, the U of G assistant football coach and CFL Hall of Famer was up for the challenge.

“You do what you can to help your kids, and I was a fan of the show, so I was up for it,” he says. “You really have to step outside of your comfort zone in experiences such as this if you want to be successful.”

Lumsden has coached with the Gryphons for five seasons, and won three Grey Cups while playing for the CFL’s Edmonton Eskimos. But he says playing football was nothing like the experience of competing on the reality show, which saw the team paragliding in Santiago, Chile, performing the tango in Buenos Aires, Argentina, and diving for lobsters in Halifax, Nova Scotia.

“It’s very unique, and the only thing you can expect is the unexpected,” says Lumsden of the race.

The duo was the sixth team eliminated after taking a two-hour penalty on a mentally challenging flight schedule test that involved matching time zones and flight durations to create a 25-hour itinerary. The senior Lumsden then struggled on a trampoline challenge.

“It was a great experience,” he says. “You take the whole race and roll it up into one memory that you will look back on and be glad that you were a part of.”