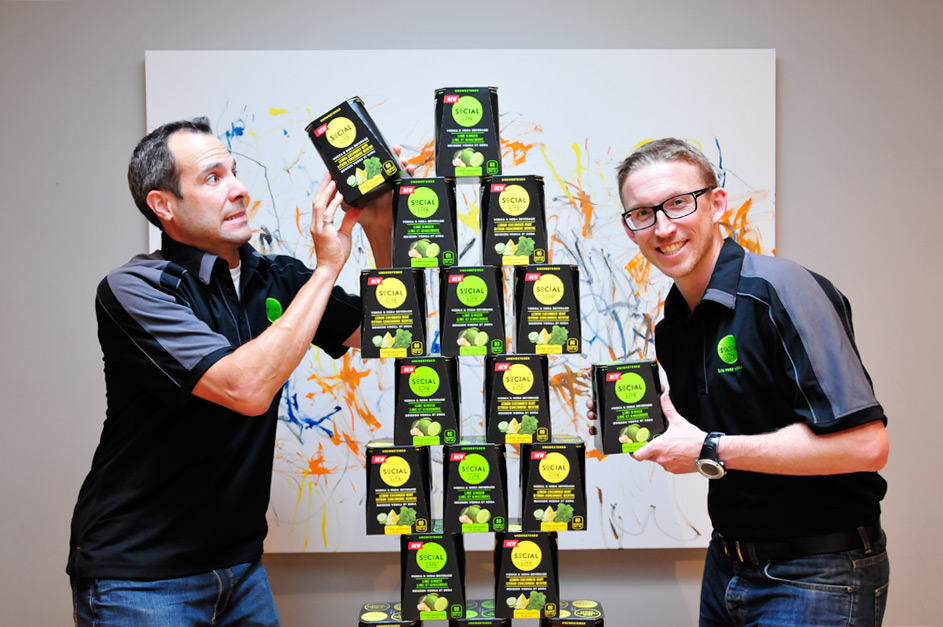 Dan Beach and Kevin Folk engineered a “healthier” vodka cooler made with natural flavours — their SoCIAL Lite Vodka contains no sugar, gluten or artificial colours, and it has only 80 calories per can.

Beach and Folk met as engineering undergrads at U of G and worked in their respective fields for several years after graduation. What started as a mutual fondness for vodka coolers turned into a business venture — after some market research, they discovered a niche for low-calorie vodka-based beverages, the top-selling mixed drink at bars across Canada.

“We saw the trends in the marketplace,” says Beach. “People are watching their calories; people are eating less sugar.”

After experimenting with different flavours, they approached the Business Development Bank of Canada and received funding for their idea. Their next stop was the Guelph Food Technology Centre, which helped them develop their beverage’s flavours. It took eight months to create the brand’s two flavours: lime ginger and lemon cucumber mint. Achieving the right flavour balance involved some trial and error — one recipe was too mint-heavy and tasted like toothpaste, says Folk.

“The flavours we use are all natural,” he says. “You can pronounce every ingredient: it’s basically carbonated water, vodka, natural flavours and either lemon or lime juice concentrate.” Pasteurization eliminates the need for preservatives, he adds. “That definitely sets us apart from the competition.”

They partnered with Still Waters Distillery in Concord, Ont., to make their vodka, which contains four per cent alcohol content. Beach says most vodka coolers contain neutral grain spirit, a low-grade alcohol made from corn. “In order to cover up the flavour and create a pleasant flavour profile, they add a lot of sugar.” That can add up to 300 calories per bottle.

SoCIAL Lite Vodka was launched in Alberta in September 2014, and the duo hopes to expand sales into British Columbia this year and the rest of Canada in 2016.

The entrepreneurs advise other startups to be passionate about their ideas, but don’t expect instant results. No matter how many taste-testings Beach and Folk did, they admit that starting their own business was challenging and time-consuming. Beach quit his full-time engineering job to focus on SoCIAL Lite Vodka. Their personal lives also took a hit, says Folk, referring to “annoyed [yet supportive] wives.”

Their efforts are starting to pay off with sales around $150,000, and positive feedback from consumers and retailers. They have also appeared on Dragon’s Den and are currently working with “dragon” investor Arlene Dickinson.

“Dan and I can say that all of our hard work is paying off,” says Folk. “We created a viable brand from scratch, and we will continue to apply the same energy and dedication to build a Canadian success story.”
–SUSAN BUBAK

ALSO TRY: Revel Cider, a dry cider crafted with 100 per cent Ontario apples, hops and Canadian oak. Its Hop X cider, created with a new Ontario hop varietal, has flavours of orange, strawberry and lychee, and its Liquid Gold cider is fermented with a wild Ontario yeast infusing it with flavours of guava and citrus. The start-up brewery by plant science graduate Tariq Ahmed, B.Sc. ’15, began with an internship at Manorun Organic Farm and a winning pitch to the Hub, an entrepreneurial program run by the Centre for Business and Social Entrepreneurship in the College of Business and Economics that provides start-up funding and mentorship. Revel Cider is available at various locations in southern Ontario.