The Rotary Club of Gagetown named Gerald Misener, B.Sc. (Eng.) ’68, a Paul Harris Fellow for his “service above self.” A retired research scientist, he is an active Rotarian and lives in New Brunswick with his wife, Adeline Misener, B.H.Sc. ’68.

Thomas Reaume, B.Sc. (Agr.) ’71, authored 620 Wild Plants of North America (University of Regina Press) and donated 10,000 of his pencil and ink drawings to the Canadian Museum of Nature. His new ebook, tom4art.ca, can be printed for free.

Lorie Jocius, B.A.Sc. ’72, aims to raise $125,000 for brain cancer research — matched by Brain Canada for a $250,000 total — through the Ginty Jocius Brain Cancer Research Fund. The fund was established in memory of her late husband, Ginty Jocius, B.Sc. (Agr.) ’70, who was an active alumnus and former chair of the OAC Foundation. To donate, visit www.GintyFund.org.

Peter Charlton, B.Sc. (Agr.) ’76, was a dairy farmer for 25 years, and then worked at Farm Credit Canada for 15 years where he was an accredited senior agricultural appraiser. He is now enjoying retirement.

Nikki (Rand) Kelvin, BA ’76, completed a PhD in archeology at the University of Sassari in Italy. For her dissertation, she was part of a team that excavated a medieval crypt in the Cathedral of Saint’Antonio Abate in Castelsardo that contained the remains of more than 100 individuals, several of whom were naturally mummified. After graduating from Guelph, she completed a master’s degree in Old and Middle English at the University of Waterloo and then worked as an editor, as well as a writing instructor at Western University and Fanshawe College. She has been married to David since 1978, and they have five children and six grandchildren with another due in October.

Kenneth Anderson, BA ’77, is semi-retired but still works for clients in Canada and abroad ranging from the Government of Canada and Universities Canada to the Ontario Real Estate Association.

Neil Dolson, B.Sc. (Agr.) ’77, MBA ’99, retired from his job as president and CEO of Nachurs-Alpine Solutions, an international starter fertilizer company. He spent his entire career working in agriculture, concentrating on fertilizers in the past few years, and has travelled around the world sharing his expertise. He now looks forward to travelling and pursuing other interests.

Rick Elliott, B.Sc. ’78, is “living the life” in Kelowna, B.C., working as a manager at Andrew Peller Wines in the Okanagan Valley. He says he’s “still pinching myself to make sure I’m not dreaming!” Friends can contact him at rick.elliott@andrewpeller.com.

Leslie Newman, B.Sc. ’79, is studying penis fencing in flatworms and is working on a second volume of his book The World of Polyclads. He is also an adjunct professor at Southern Cross University in Lismore, Australia. He says, “I thought I was retired but I am busier than ever!”

Michael Pitcher, B.Sc. (Agr.) ’81, owns a bakery operation serving central and northern Vancouver Island. For the past 15 years, he’s also been involved with timber reclamation and environmental cleanup in the Comox Valley, and has volunteered for the Canadian Association for Disabled Skiing and Habitat for Humanity.

Tom Hedican, BA ’82, received an honorary doctorate of education from Nipissing University. A professional goaltending consultant, he founded Coach4Food, which has raised more than one million pounds of donated food.

Cameron Smillie, B.A.Sc. ’82, director of touring for Canada’s Ballet Jörgen, won the B.C. Touring Council 2015 Award for Agent/Manager of the Year. He is also co-founder of Live at the Hippo Pool Events, Inc. and is an active volunteer for the arts.

Scott Fotheringham, B.Sc. ’85, earned his PhD at Cornell University Medical College and worked in molecular genetics, organic agriculture and other areas. He has always been passionate about writing, and his first novel, The Rest Is Silence (Goose Lane Editions 2012), was shortlisted for the Amazon.ca First Novel Award, the Dartmouth Book Award and an Ottawa Book Award. Currently, he is senior account manager at Philpott Communications, where he writes marketing and public relations material for a wide range of companies.

Susan Langille, B.A.Sc. ’85, lives in Lake St. Louis, Missouri, with her husband. She is proud of her four children, two of whom graduated from U of G. She travels between the United States and Canada working as a local elementary substitute teacher in Missouri and a supply teacher for the Kawartha Pine Ridge School Board in Ontario.

Carol Poland, DVM ’90, has “shifted gears” from a professional veterinary career to co-own the bike-friendly Grandview Chalet Bed & Breakfast in Canmore, Alta. She is a proud supporter of bike-friendly businesses that promote cycling.

Barbara Allen, B.Comm. ’91, is developing works of art, called Fibre Fantasies by the Sea, using materials from the Salish Sea such as threads for quilts, felts and more.

Chris White, B.Comm. ’94, is director of sales and marketing for Starwood Hotels and Resorts, Inc. in southern California, where he oversees several luxury properties such as the St. Regis Monarch Beach and W San Diego. He previously served as director of marketing at the Four Seasons Resort Hualalai, Hawaii.

Vikram Shrivastava, B.Sc. (Eng.) ’96, has been promoted to associate in professional services firm Dewberry’s Fairfax, Virginia, office. He has more than 15 years of experience in water resources engineering.

Craig Shreve, B.Sc. ’97, published his debut novel, One Night in Mississippi (Dundurn Press), which The Globe and Mail listed as one of three small-press books to read.

Sarah Dekker, Dipl. ’98, returned to school for transport truck driving and has worked in various positions, driving equipment and performing office roles at trucking companies. In January 2014 she and husband Ed welcomed twins Brahm and Annika.

Sandra Stewart-Fearnside, B.Comm. ’98, moved from operations to sales with Choice Hotels Canada, Inc., where she is now managing the inside sales support team. Her team assists with client inquiries, group and tour reservations and relations with the United States team of specialists, among other duties.

Daranne Harris, B.Comm. ’00, was appointed vice-president and chief mission officer for the Bethany Care Society, one of Alberta’s leading providers of continuing care and housing. She lives in Calgary with her husband, Greg, and their son, Spencer.

Andrew Kaszowski, B.A.A ’06, started a new job as interactive media design and communication specialist at the London Public Library, where he oversees its website and social media strategy. He says, “I’m very excited and loving it so far. It’s so great to be working with an organization that’s so important to the community.” 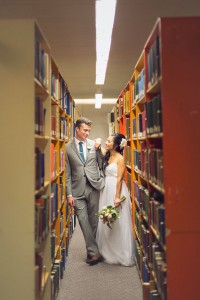 It may not be the typical romantic setting for wedding photos, but for Matt Downey, B.Comm. ’07, and Vanessa Tran, B.Sc. ’07, the University of Guelph’s McLaughlin Library holds “a lot of fun memories” studying together as undergrads. The couple, who met at U of G, were married Aug. 23 at War Memorial Hall. Downey now works at an accounting firm in Hamilton and Tran is completing a postdoc in a Toronto research lab studying malaria.

Kathryn Marsilio, B.Sc. ’08, MPH ’10, received her doctor of medicine degree from the University of Toronto in 2014, and is now completing a residency program in public health and preventive medicine, which will give her two years of practical experience in family medicine followed by three years in public health. Upon completion, she will be certified as both a family physician and a public health physician. Among her public health interests are mental health promotion and youth wellness. She says one of the best things about attending U of G is the “expectation that students will be part of the community,” which inspired her passion for volunteering and her interest in mental health.

Karen Sibrian Tobar, B.A.Sc. ’08, graduated from the Military Police Academy in Borden, Ont., and has started her first deployment.

Angela Cavanagh, M.Sc. ’11, graduated from medical school at Western University in May 2015.

Thomas Piggott, B.Sc. ’11, and Laura Jewell, B.Sc. ’10, were married Aug. 1, 2015 with several U of G alumni in attendance. The couple met on the student-run First Response Team at U of G. Piggott graduated from McMaster University’s medicine program in 2014 and is now completing a public health residency at McMaster. Jewell is studying medicine at the University of Toronto.

Lauren Langille, B.Comm. ’13, recently graduated from the University of Missouri with a master’s degree in journalism. She was a recipient of the White House Correspondents’ Association scholarship presented by President Barack Obama in April 2015. She has interned with Bloomberg News and CNBC, and lives in Washington, D.C.

Jennifer Turner, B.A.Sc. ’12, earned a master’s degree in public policy and administration at Ryerson University in 2014. She has worked at the Social Planning Council of Toronto and the United Way in policy analysis and research.

Nadia Belerique, MFA ’12, is part of the Art Gallery of Hamilton’s contemporary art exhibition called are you experienced?, which runs until Jan. 3, 2016. The exhibit features six artists who propose distinct representations of familiar yet strange objects, events, people and places, through video, installation, sound, sculpture, photography and painting.

Shannon Coffey, B.Sc. ’15, was one of 10 people selected for a summer internship at Baycrest Health Sciences. Her placement focused on clinical issues in gerontology and evaluation techniques, among other areas.